So if I had one bad thing to say about 2000Trees, it would be making a decision to drive nearly 500 miles home after entering Shikari! Anyways this small festival down on the outskirts of Cheltenham is a lot of fun! The atmosphere, Line up and scorching weather made this into an incredible weekend.

Thursday was a great day, seeing three-piece band Press to Meco from Croydon play an absolute screamer of a set! You could tell they were shocked by the crowd. They loved it bouncing around singing word by word with Luke (guitarist). After recovering from what I had just watched I took a short walk over to the next tent to see what else was going on. One great thing about 2000 Trees is that the site space is quite small so it takes about one minute to get from stage to stage. 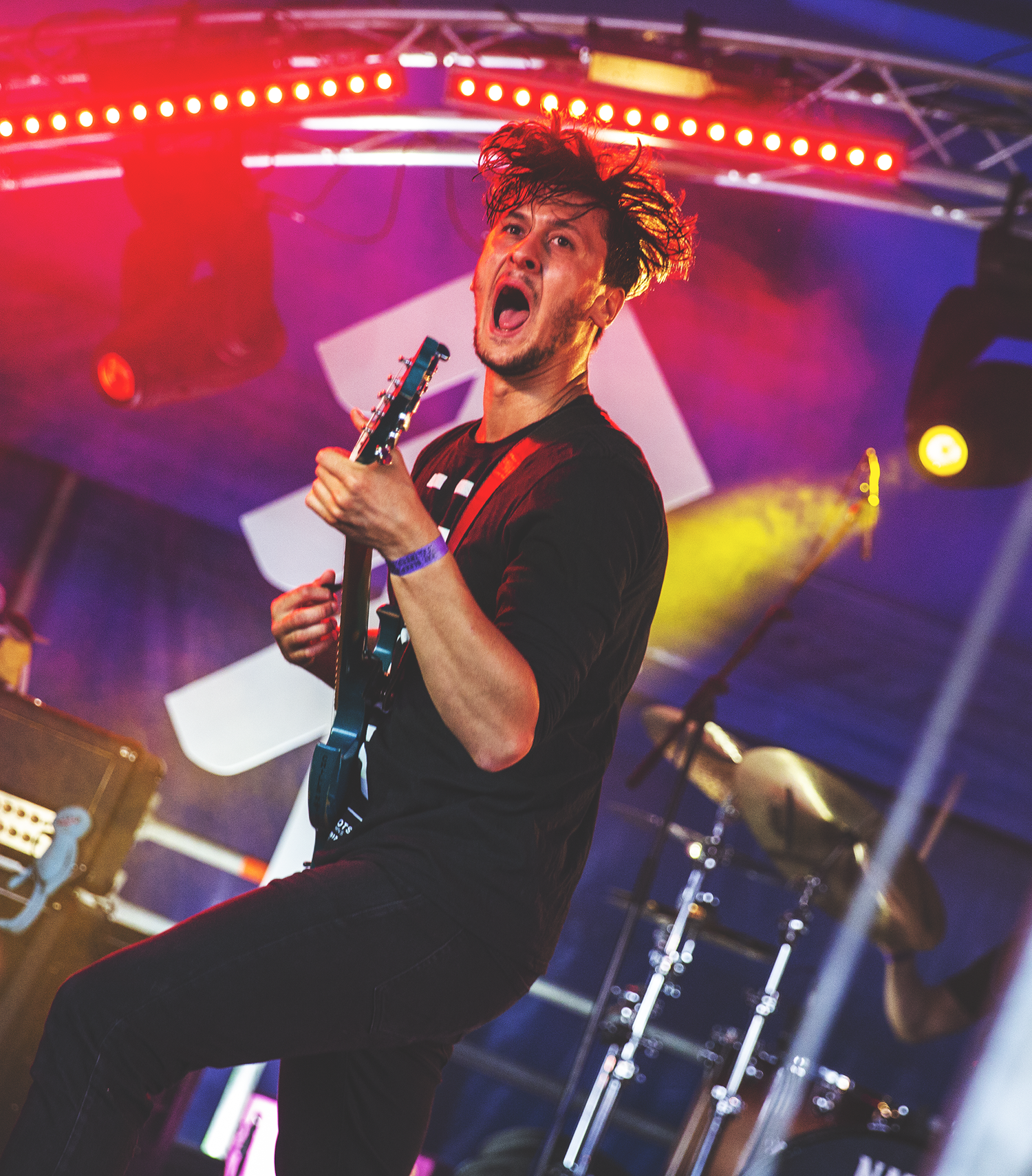 Next on was Scottish Weirdos Vukovi. They were a huge hit with the crowd, clearly had made an impression on them. I was pleasantly surprised and glad to see how many people turned up to see a band from Glasgow. On the Main stage, we had At The Drive-In close the Thursday evening with their only UK festival date of the year, following their support slot on Royal Blood’s tour at the end of 2017.

Friday was a great day – the sun was shining around 150/200 people had turned up the morning yoga session in front of the main stage. The highlight of the afternoon was seeing how much people had turned up to show support and be part of the memorial of Scott Hutchison (Frightened Rabbit), there were many acoustic performances of his songs closed with Ross Leighton of Fatherson covering Head Roll-Off. Whist waiting to watch Fatherson’s set on the main stage I went to check out Canadian band Courage My Love. The three-piece blew me away, their catchy songs to how well Mercedes (lead guitar) interacted with the crowd.

Fatherson on the Main Stage was incredible. After seeing Ross perform earlier in the day he was ready to show the crowd that this band are going places! Another highlight of the day was festival favourites Mallory Knox –  I could tell the crowd were loving it by the number of times I was kicked in the head by crowd surfers. Closing the evening was the mighty Twin Atlantic. The guys really showed the crowd how they are one of the best bands not just in Scotland but all over the world. Incredible setlist taking tracks from all over their discography. Will never get over watching them play ‘Crash Land’ live!.

Saturday started with a great/funny set from Haggard Cat. This two-piece just wanted to rock for the crowd but due to no fault of their own everything started to break from cymbals to mics. Another crowd favourite Cove rocked their stage and got the crowd warmed up for Scottish pop-punk band Woes who pulled in a huge crowd, mainly because I don’t think they haven’t been on a tour in the past couple of years. The crowd loved it, especially one Scottish fan with very majestic dance moves.

The next band I caught was Aberdeen legends The Xcerts. You could see their biggest fans on the front row, singing along with Murray and telling him that the loved him. I got a chance to have a quick chat with Murray before their set. We talked about how excited the band is to play The Barrowlands again later this year supporting You Me At Six and wondered if the floor in the venue Tunnels in Aberdeen has ever dried? (If you’ve ever been you’ll understand!)

But the highlight of the evening before the Hellish drive home was Enter Shikari! The crowd went mad! As the walked out on stage I’m surprised I didn’t go deaf from how loud they were screaming. With an incredible light-show and quadraphonic sound system. I cannot wait to see how they do with their upcoming tour.

Overall 2000 Trees was an awesome weekend, highly recommended! You’ll get to see great bands you might not have seen before but will love right after.