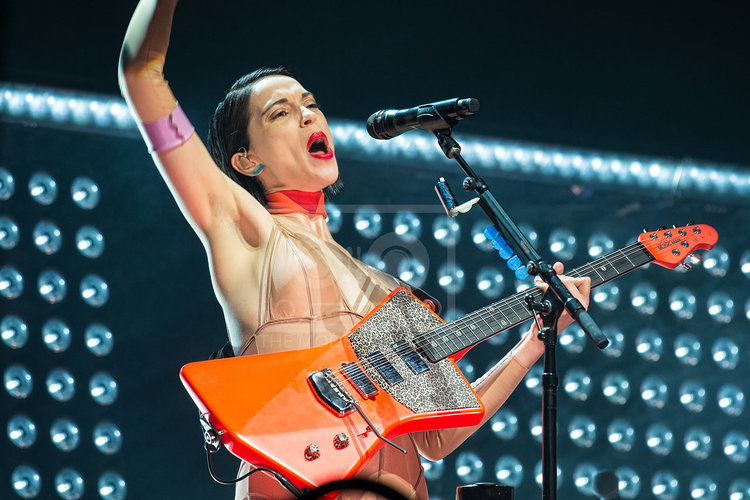 THE BRILLIANT ST. VINCENT BRINGS HER TOUR TO EDINBURGH’S PLAYHOUSE AS PART OF THE INTERNATIONAL FESTIVAL

In Edinburgh at The Playhouse tonight to see St Vincent, not seen a gig here since I saw Joe Satriani in the early nineties. Looking forward to seeing Saint Vincent as her reputation and collaborations suggest she is a great artist but I don’t know the songs.

I’m seated in the stalls not far from the stage, great seat. No support act it’s just straight to the main event, the lights go out and the band takes the stage in the dark and when the lights come back up there is a four-piece on stage. Two blokes in orange boiler suits, blonde bowl-cut wigs and strange, almost creepy face masks they are playing drums and synths…there is also an Asian girl dressed in Orange playing Bass and some synth…then, of course, there is Saint Vincent in a nude jodhpur-like legging and body stocking, orange choker, belt and thigh-high boots, a striking look!

The opening track was high-impact from lights to the fuzz guitar riff. The band is set up in a line across the stage with Saint Vincent to the far left drums to the far right.

The second track brings the addition of video on a screen above the stage lighting behind the band, during the set this shows a myriad of strangely symbolised images featuring the band members in caricature and St Vincent…in this track it’s a seemingly brutalised St Vincent being punched repeatedly with a floral boxing glove. The track has a very Prince feel and the guitar lines are well played. 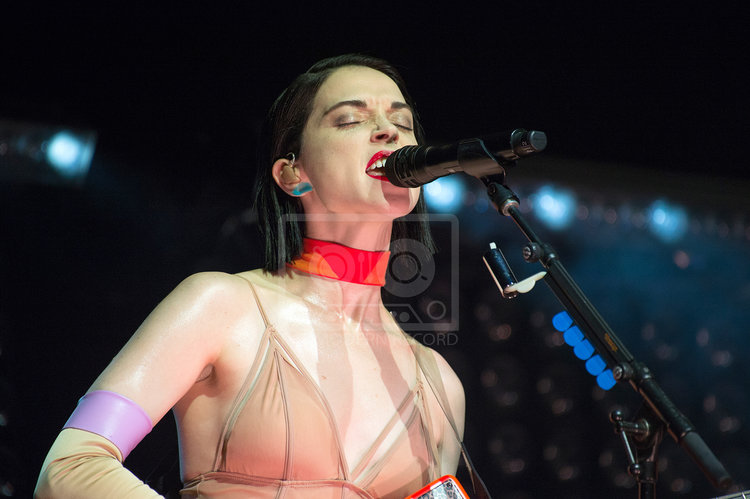 The next couple of tracks see St Vincent playing a different coloured guitar each song and playing insistent driving riffs. The show is very artistically stylised and there’s no chat between songs.

At the beginning of the fourth track St Vincent isn’t wearing a guitar but has been joined on her riser by a character dressed in what looks like a Gestapo uniform holding a fluorescent guitar, he stalks around he until the chorus, placing the guitar on her so she can play the main devastating riff….and is gone. It’s at this point I notice how immaculate her vocal is too….it’s a stunning performance.

The remainder of the main set has flashes of Prince, Madonna, Goldfrapp, David Byrne and Jack White to name a few of the influences that I could put a name to. The mix of styles used on guitar was intriguing, blues, pop, fuzz, slide, even using the mic stand to close out the angst-ridden end to one track.

Towards the end of the main set, the crowd, who had been appreciative, get to their feet in bits and pieces….it’s always difficult for an act to have to play all seated venues but they have definitely put on a show which deserves adulation.

The pace slows before the end of the main set with more emphasis on Saint Vincent herself in the spotlight. She engages the crowd a little more too. It the opening to the final song she starts a Capella leading the crowd to join her and altering the words to include the reference to George Street and the Castle before the band strike up to close out.

Rightly so, the crowd applauds and encourage the band back to the stage.

I think the encore let her down as the evening was great and seemed to build with every song to a crescendo…but the encore was slow and ballady, and the energy real dropped….leaving those who had got to their feet earlier a little bemused.

There are a lot of mournful keys and a beautifully, vulnerable vocal. Musically and pure performance-wise I can’t fault it, it’s a virtuoso at work.

All in all a great show, stunning performance, immaculate vocals, dynamite light and video show…the only let down was the song choice in the encore.