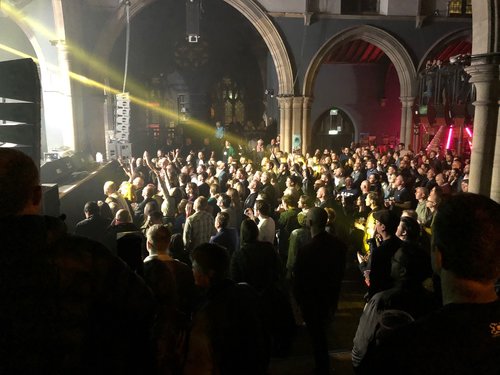 Almost 200 bands on at 22 different venues in and around the city centre.

Festival season 2019 is now officially up and running with Live at Leeds which took place on the 4th May. For those who may have never heard of this, it’s a one day based in and around Leeds City centre with almost 200 bands appearing in 22 different venues.

The uniqueness of this one is that it features not only established acts, but also lots of new and upcoming bands, and of the many delights of this day is that you are quite likely to discover great new bands. A word of warning though, some of the venues require a fair degree of commuting between so if you feel like coming along in 2020, prepare yourself for a lot of walking!

As with all festivals, you are also faced with the inevitable dilemma of wanting to see bands who are on at the same time. What do you do? Catch a few from one band then hot foot it over to see the end of the set of the other band, or simply stick with one? Either way you will enjoy yourself, this is a great festival and the venues vary in size from the 2000 capacity O2 to The Headrow House which is basically a room on top of the pub!

First up for ourselves were Dream Wife, a three piece band based in London whose punk/indie set was a great start to the day. Vocalist Rakel Mjoll from Iceland is a natural and charismatic lead and ably backed by Bella Podpadec on bass and Alice Go on guitar the early afternoon thrash out was well received by the crowd. Stand out track for me was Hey Heartbreaker from their debut album ‘Dream Wire’ which was released in early 2018 to critical acclaim. 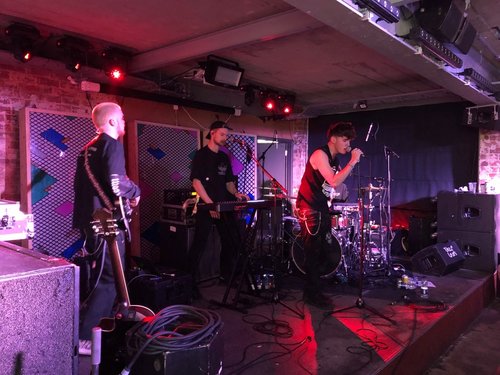 After a short pit stop, next up was James Gillespie at Shopkeepers, which was rammed to the rafters and despite it being impossible to get a decent shot of him as it was so busy, it was worth the effort to hear this boy deliver a virtuoso solo set. His bluesy powerful voice is up there with the best of them. Check out his ‘Wants and Worries’ EP to see what the fuss is all about.

Yes that is him on stage!

Then it was off on our travels this time to catch the set from Brunswick who were a new band to me. A four piece band from London, they delivered an interesting set in an R&B, Trap style with a pop twist which in my opinion worked really well. Their vocalist Harry James possesses a powerful voice and they are a band who I think given the right breaks could be a big deal in the future. ‘FXCK YOU CAUSE YOU’ released last month, sums up what this band is all about in terms of very danceable big beats and hypnotic synths and drums.

Many people have Sam Fender down as the next big thing, and the huge queues around the venue confirmed that literally everyone in town wanted to catch this set. At 23 his rocky soulful voice and incisive lyrics have rightly been praised and he won the Critics choice awards at the Brits. All this and his debut album ‘Hypersonic Missiles’ isn’t even out until Aug 2019!

The packed venue loved every minute of this powerful 45 minute set and it’s clear to see why the critics have been so lavish in their praise of him. A slowed down ‘Pound shop Kardashians’ had the crowd singing along and it has to be said that his version of Oasis’s ‘What’s the story’ was epic in its delivery and is a worthy inclusion to his set.

It’s always good to see a new artist/band breakthrough, and 2019 could very well be the year for Sam Fender. He’s now touring solidly throughout the rest of this year in the UK, Japan and the US, and I’m delighted to say the will be back in Leeds on the 28th November and I’ll be looking forward to seeing his full set this time around.

A little earlier I mentioned that one of the great things about Live at Leeds is discovering new bands, and this year was no exception, Elder Island a three piece from Bristol were for me my new band discovery highlight of the day.

Hard to categorise, their ability to create a kind of ethereal sonic wall of hypnotic looped beats overlaid with guitars, drums and vocals from Katy Sargent was a real treat for the appreciative crowd. And it’s not often you see a cello being used, but even that was thrown into the groove driven melting pot.

I want to say that Katy Sargents vocals reminded me of Florence Welch but I think that would be doing both her the band a disservice. Elder Island are unique in their delivery and style and for me they were a real joy to discover. Check out their ‘Seed in Sand’ EP to find out what it’s all about.

Next up at The Church stage it was time to take in Fatherson, from Scotland, who delivered an epic set which unfortunately was a nightmare to shoot as it was all backlit!

Currently in the middle of an extensive summer tour throughout the UK, they called into Live at Leeds to deliver their established Indi rock style which always reminds me of Biffy Clyro who unsurprisingly they have toured with. 3 albums in they have cemented their place as one of the leading exponents of this genre and within the surroundings of the Church venue their soaring tunes were a perfect fit and the Leeds crowd enjoyed every minute of it.

Apologies for the poor shots here!

In a complete change of style, our next band was Seafret, an acoustic duo from Bridlington.

No strangers to Leeds they have already played a sold out show at the Wardrobe earlier this year and there was a large crowd here to see them.

The plan for the end of the day was to catch Metronomy, however due a slight mishap at the venue (there was an overnight flood!) they were unable to perform so on the spur of the moment we headed over to catch The Slow Readers Club set. From Manchester this hard working band have built up a substantial following and judging by the no. of Slow Reader T-Shirts on display, their set was going to be the highlight of the day for many people.

Hailed by one critic as one of the most exciting bands to come out of Manchester, from the moment they took to the stage it was clear to see why. Their style of Indi electro rock was very reminiscent of early U2 and Joy Division. Indeed vocalist Aaron Starkie reminded me of the late great Ian Curtis and with Jim Ryan playing his bass at knee level this just re-enforced the feeling.

Their opening song ‘Lunatic’ with its pulsating guitar led beat and Starkies vocals set the tone for the evening and their loyal fan base sang along to every word. It was clear that the band were enjoying themselves as well and chatted with the crowd throughout the set.

Starkies brother, Kurtis Starkie on guitar and David Whitworth on drums completed the line up and this was a set from the band very much at the top of their game. Strong tunes, great vocals and a noisy and appreciative audience was a great way to end the day and another great Live at Leeds event. Always well organised, an eclectic selection of bands and decent venues ensures that there is something here for everyone.

And so another Live at Leeds came to a close and what a day it was. As I mentioned at the start of this article, it’s impossible to cover every band at the festival, but wherever you go I can guarantee you a great day and evening out, so start making plans for 2020, and we can do it all again