THE MODERN RECORD: INTERVIEW WITH ‘ROAM’

BRITISH POP PUNK BAND ROAM HAVE HAD AN INCREDIBLE YEAR. THEY RELEASED THEIR DEBUT ALBUM BACKBONE, TOURED THE WORLD AND NOW THEY ARE RELEASING THEIR SECOND ALBUM GREAT HEIGHTS AND NOSEDIVES. I WAS ABLE TO SIT DOWN WITH BASS GUITARIST MATT ROSKILLY AND DRUMMER MILES GILL TO TALK ABOUT THEIR UPCOMING RELEASE.

The Modern Record: so you guys released Backbone last year and now you’re already bringing out a new album, and a lot of people are wondering how is it going to be different?

Miles: I wasn’t in the band when they wrote and recorded Backbone, but we’ve toured a lot and we’ve seen a lot of different bands play, and we’ve done things like warped tour. You know we’ve just been out there seeing what kind of works and what doesn’t and listening to a lot more music, which I think is a huge influence on the new record. Also when we writing this album, obviously I wasn’t in the band when they wrote Backbone, but it was less like let’s write a song like this, let’s do an acoustic song We got together and jammed for a long time and then just wrote a bunch of stuff that wasn’t trying to be anything else and I think it sounds a lot more like us

Matt: it sort of naturally came together. We just sat down and jammed and we didn’t quite have an end goal, we had only discussed a few ideas of what we wanted to sound like but we just went with what came naturally, and I think what that’s done it even the way we play the old songsand the way we like lock in with each otherit’s something that has progressed so much over the past 18 months since we released Backbone. Over that time we’ve all progressed as musicians and progressed in so many different ways with life experience and everything like that. It feels more mature, so yeah it’s exciting.

The Modern Record: speaking of touring, you guys have toured endlessly for the past year. You’ve toured with As It Is quite a lot and people are wondering, is there going to be a collaboration any time soon?

Matt: Honestly you could never tell

Matt: they’re from literally the town next door. They’re from Brighton and we’re from Eastwood which is just down the road, so like when we first started playing shows around our local area, we use to play shows with As It Is and we’ve played shows where it was us, As It Is and the two people in the crowd and we just played to each other. So we’ve had that relationship as bands for a long time and when we first went to the states, us and As It Is shared a van, and sat shoulder to shoulder, sleeping on each other’s shoulders. So we’re very close and I wouldn’t rule out something like that happening sometime but we have no plans. We should think about it really.

Miles: We like touring with As It Is as well, because its like an extension of our band, like we can sit around and it sounds really weird and not speak about anything and it’s not awkward, we’re like one band.

The Modern Record: so I ask a few of your fans on Twitter if they had any questions, and someone asked if you’re going to be releasing any new singles or videos before the album gets released because everybody loved Playing Fiction, so everyone’s wondering if another single will be coming soon?

Matt: yeah we released a live video a week ago, so we released those two and I think we’ve got at least another song coming before the album comes out

Miles: but I mean people won’t have to wait long because the album is out in two weeks

Matt: it would be rude not to release one more. I don’t know when it’s coming out but it will be out.

The Modern Record: someone else asked me what song has changed the most from pre-production to now?

Miles: Or While The World Keeps Spinning

Matt: yeah I think those two, with Curtain Call was, when we wrote it, kind of like the Deadweight esc song

Miles: because it was the first song we wrote, the first every idea someone came up with for the new album

Matt: So it kinda like had the minor sort of sound, where it was quite dark and quite heavy, it had loads of riffs and stuff like that. And now it’s pretty much the opposite it doesn’t sound like that at all, that’s pretty much all I can say. And While The World Keeps Spinning went from being a chill like jammy song to being one of the more poppy ones, it’s probably one of the most pop songs we’ve ever done. Both those songs just completely flipped and I think it’s come out for the best.

The Modern Record: It’s amazing how that happens

Miles: when we went to the studio, we had pretty much 12 full songs when we went in, but a lot of stuff also came about in the studio so we went in with all our ideas but being in that space and just working on stuff, stuff just kind of works it’s way out and things evolve over time.

The Modern Record: so obviously with Backbone, your influences are very classic pop-punk, which is amazing, everyone loves it. Are you influenced the same on this album or would you say they have changed?

Matt: I think, weirdly enough, our older stuff, we directly took influences from bands and we like looked at that classic pop punk, Sum 41 and Good Charlotte and stuff like that, we deliberately tried to writea certain way that sounded pop punk. Funnily enough, I wouldn’t say this album is particularly influenced by anyone, we weren’t listening to any pop punk at the time we where writing it. We where listening to loads of stuff and a wide variety of things like from pop music, to rap to metal. Obviously by doing that it didn’t really reflect into the songs. It just came out naturally, I don’t think this album is particularly influenced by anyone. Obviously we all have our underlying influences but there wasn’t a particular band we where listening to

Miles: As well you know, we did a tour with Lower than Atlantis before we went into the studio and that was fairly big rooms. We played Brixton Academy on that tour and I think that’s the biggest room we’ve ever played and watching bands play on that next level up from us, where their playing 02 Academy size rooms, their playing out to 1,500 to 2000 people a nightyou start to realise that in those venues pop punk, really fast jammy stuff doesn’t work as much.

Matt: when you’re playing like punky things on the drums it’s so boomy in the room, the noise just turns into this overbearing wall of sound that just hits the crowd and their like “I don’t know, their just jumping around playing this thing” and that made us think we have to put a little more space in our song. It makes things a little bit bigger while still keeping our sound.

Miles: it’s not even a case of us trying to “sell out” or we’re trying to make a calculated effort to be a huge band. I just feel like obviously you do want to progress and grow, and taking a look at those bands who are the next step up from us, it does kind of have an influence.

Matt: it’s just general growing as a band, I think influence wise you could pretty much say anyone we’ve listened too.

The Modern Record: so it sounds like fans have got a really exciting, different album to look forward too.

Miles: I do hope so

Matt: We’re all very happy with it. It’s easily the best stuff we’ve ever written and I know people say that all the time but for us we’re so, so proud of this album.

The Modern Record: I think if you’re proud of it, fans will be proud of it as well. The response so far has been phenomenal, Playing Fiction: huge, Alive: Everybody loves it. So from what I’ve heard, it’s going to be an amazing album. So if you had to pick a favourite song off of it, which one would it be?

Matt: it’s hard, but that’s a really good thing, like if you asked each individual members of the band, we each have a different favourite without a doubt.

Miles: The second song on the album Left For Dead is like a collective favourite.

Matt: Everyone loves that song because that song is more like a similar style to our older stuff but more grown up. It’s more well thought out. My personal favourite is a song called Guilty Melody, I don’t know how to describe it. It sounds like us but it feels big, it feels different, too me it’s a stand out track. It’s different chords and things that we wouldn’t normally go for.

Miles: I feel like we’ve released Alive and Playing Fiction, but none of us feel like we’ve played our trump card. People we’ve played it to, our friends and other bands, everyone has a different favourite, which can only be a good thing. Even discussing first singles, Playing Fiction we didn’t even think, when we came out the studio that, that was going to be the first single.

Matt: yeah that was no ones first choice for singles and now I wouldn’t change it, it is the first single, it should have been, always. When we came out the studio we all had a couple of songs we where like are going to be first singles but when it came down to deciding on them, we just got to a point where we decided on Playing Fiction.

Miles: We’ve discussed it and that can only be a positive thing that there was no instant obvious stand out thing for us.

Matt: honesty without hearing the songs you could have put your finger on any song in the album and we could have released it as a single and I would have been fine with it. We all love the album. 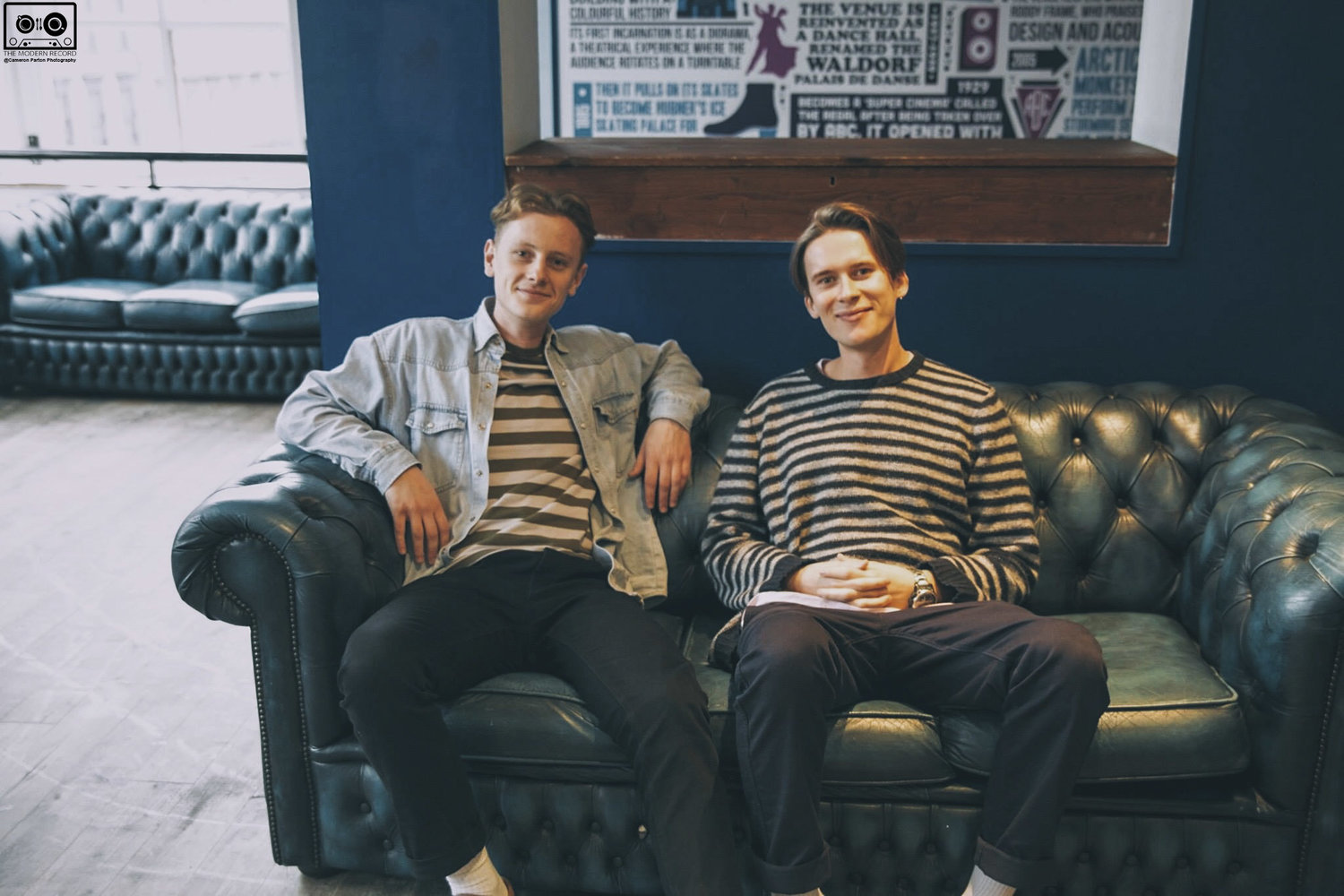