In 1980 Rolling Stone described Talking Heads’ classic album ‘Remain in Light’ as: “Scary, funny music to which you can dance and think, think and dance, dance and think”. 38 years later David Byrne has managed to translate this into a stage show which entertains every bit as much as it provokes thought.

To warm up the breezy all-seated audience at the SSE Hydro in Glasgow was 2015 mercury prize winner Benjamin Clementine, albeit in a much different format as usual. In the place of dramatic piano character ballads was a more laid-back folk ensemble amalgamated with live sampling and electronics. Perhaps it seemed at points that Clementine was still fine-tuning the shift which saw him play acoustic guitar and share vocal duties with his (assumedly) wife. It was an interesting watch that certainly pushed the boundaries in places, hopefully, a taste of something more constructed to come down the line from Clementine.

The idea of thought was presented from the start as David Byrne began his set sat at a desk holding a model brain. He chose ‘Here’ from his latest studio offering ‘American Utopia’ to kick things off. Political issues are something Byrne has never been afraid to tackle in his music and this becomes more apparent as the band marches out in grey suits moving in synchronized unison. The entire ensemble band (which includes separated drums and percussion) fill out the stage and join Byrne in choreographed performances of the song. The band is as culturally diverse at Byrne’s music itself (He states there are band members from Europe, Africa, and Brazil amongst others). The performance then proves to be one of the most bizarre I have ever seen, something kind of like if George Orwell wrote musical theatre. Each song had its own personality, sometimes the band and additional vocalists moving in sync with Byrne and sometimes separating themselves to isolate him on the stage. Sometimes the band seemed happy and free, sometimes the band bore blank automaton expressions. Props came in for various songs to become part of the performance. The whole thing seemed like an alternative pop concert from the future. The musicianship was impressive especially as the band had to perform a routine at the same time as playing their instruments. This live element at first seemed dubious but Byrne took time out in the set to build up a song to prove that everything was live on stage. 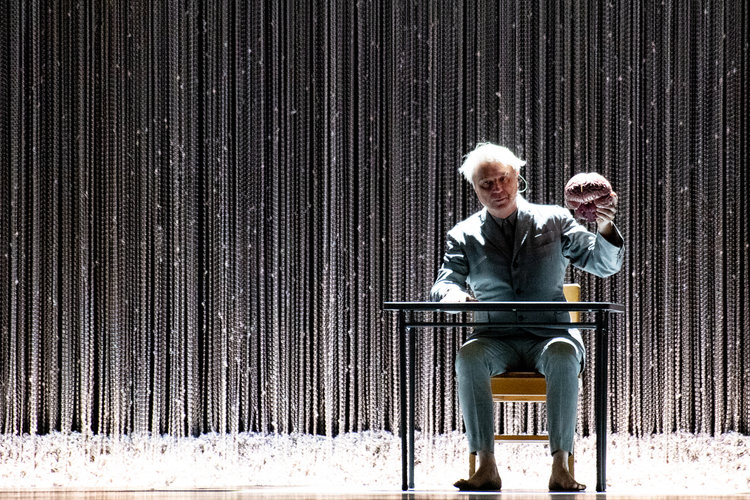 Byrne performed songs from a variety of projects he has worked on over the years with some crowd-pleasing preference for Talking Heads classics. An early-on performance of ‘I Zimbra’ and ‘Slippery People’ got the crowd on their feet. Perhaps lesser known to the audience but providing stylistic variation in the set were Byrne’s own tracks including several from the politically driven ‘American Utopia’. Other pleasant surprises were ‘I Should Watch TV’ from Byrne’s collaboration with St. Vincent and a cover of ‘Hell You Talmbout’ by Janelle Monae. The band brought out the character of each song well especially in classic tracks that fuse erratic dance-driven guitar music with electronics and African drum rhythms, the staple of the Talking Heads sound. The vast amount of percussion helped to create pulsing renditions of tracks such as ‘Born Under Punches’, ‘This Must Be The Place (Naïve Melody), ‘Burning Down the House’ and ‘Once in a Lifetime’

Byrne’s performance fuses entertainment and performance art to create a live show like no other. The show makes you sing and dance but also consider the world around you. Several breaks were taken for Byrne to talk about issues such as voting. It’s proof of David Byrne’s genius that he’s able to create something that is at the same tie definitively classic and provokingly forward-thinking. 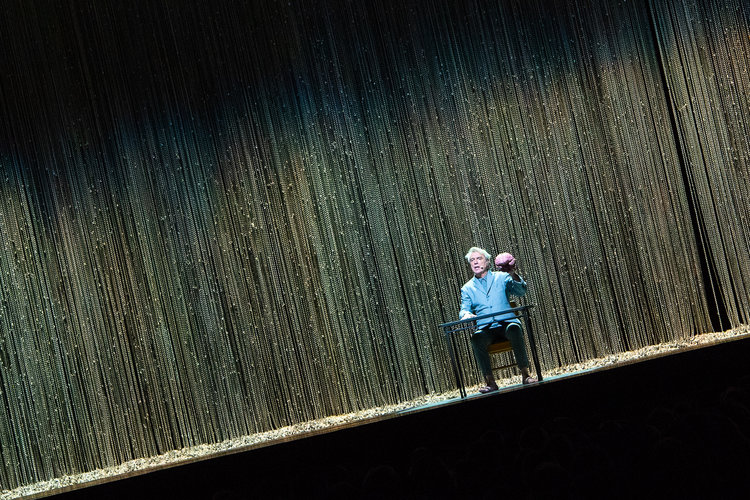