After releasing their brand new album ‘Living Proof’ earlier this year, State Champs bring their tour to Glasgow with some excellent bands in support.

Up first is Scotland’s own Woes who gleefully take the stage and get straight to it. Playing tracks off their self-titled and ‘Self Help’ EP’s the treat fans to a good mix of songs with ‘Losing Time’ and ‘Over It’ being the highlights. Woes also give us a taste of what’s to come as well in the form of new song ‘Moneyshoe’ which sounded like an excellent progression and is sure to be a hit with fans. Their set was energetic with bassist Sean Duddy not afraid to get some air and 2019 looks set to be a big year for the band.

Next up all the way from Australia is female-fronted Stand Atlantic. With this being only their second time in Scotland and their debut album ‘Skinny Dipping’ only just being released, they are here to prove what they are all about. Opening with new track ‘Lavender Bones’ they get support from the crowd from the start with the lyrics being sung back and the band smiling at the response. They also play the title track of their new album for the first time tonight and is a welcome addition to the set. Tracks from their previous ‘Sidewinder’ EP also still sound brilliant life and set closer and huge single ‘Coffee at Midnight’ is one of the best moments of the evening.

The main support for the evening comes from Canadian pop-punks Seaway who come out with the goal of getting the crowd ready for the main event. Opening with ‘Best Mistake’ the crowd at first seem apprehensive to get involved, but after some encouragement frontman Ryan Locke this changes quickly with the first crowd surfers of the evening showing up. Tracks from the latest album ‘Vacation’ are the main focus of the set with ‘Apartment’ and ‘London’ being the big highlights. Closing with popular single ‘Lula on the Beach’ they finish with a bang and hopefully we see some new music from the band in the near future.

Finally, State Champs take to the stage hidden in darkness for the beginning of ‘Criminal’ before the stage is lit up with sparks and energy when the song kicks in. Tonight, we are treated to an expansive set from the band from New York with them covering all bases. Tracks from their new album ‘Living Proof’ slot into the set perfectly and sound huge with highlights being their singles ‘Crystal Ball’ and ‘Our Time to Go’, but also the deeper cuts like ‘Safe Haven’ also sounds excellent.

The band looks comfortable playing the larger set and are not afraid to bound from side to side on stage with frontman Derek DiScanio being especially lively. Older tracks are not forgotten however with their debut album recently hitting its fifth anniversary they take a moment to reflect then launch into ‘Remedy’ and ‘Simple Existence’. Even finding the time to include the acoustic track ‘If I’m Lucky’ (which was played solo) and the big hits from 2015’s ‘Around the World and Back’ this is a set that will be remembered. Closing with an encore of ‘Elevated’ and

‘Secrets’ and the crowd losing their minds they finish in style and promise to be back sooner rather than later. 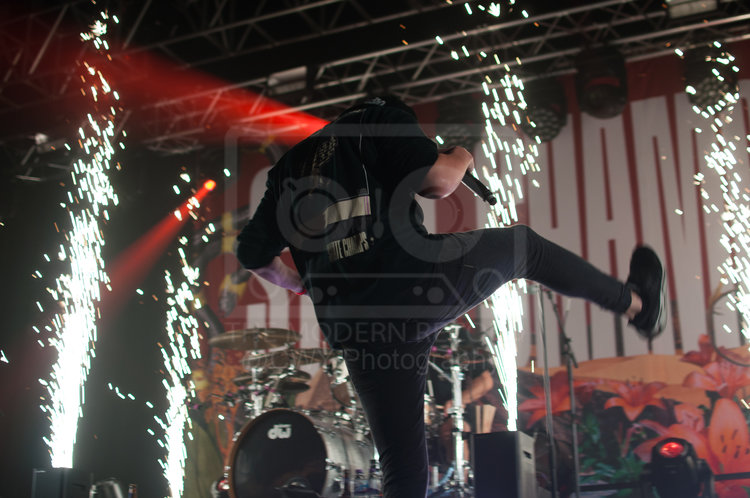