Dream Wife returns to Leeds bringing their UK Headline Tour to The Wardrobe.

I’m always a little apprehensive heading to a new venue, you never know quite what to expect and it can have a big impact on the evening. Tonight was The Wardrobe in Leeds and as venues go it turned out to be a belter. Small enough to be intimate, big enough to have a great atmosphere, and really well laid out with a terraced viewing area all-around a central floor. Tonight we had a very full night to keep us entertained with 3 bands on the bill. Cat Apostrophe, Queen Z, and headliners Dream Wife.

First up to take on the sell-out crowd was Leeds’s very own Cat Apostrophe who launched headfirst into action with ‘Roast Dinner’ giving us an early sign of what was to come. What was to come was in fact an opening set of life inspired songs delivered passionately by the powerful voice of Kirsty Fife complimented brilliantly by the more gentle tones of Kate Stonestreet. Although to be fair Kate can raise her game too when she wants to in the power stakes as the band stormed through ‘January’ ‘Bedroom Carpet’ and finished with the brilliantly named ‘Dickhead’. The anger and frustration behind their song’s lyrics were belied a little by the fact that this was a band clearly enjoying themselves and having a great time playing to a larger audience than they are used to. Let there be no doubt that punters enjoyed it just as much. 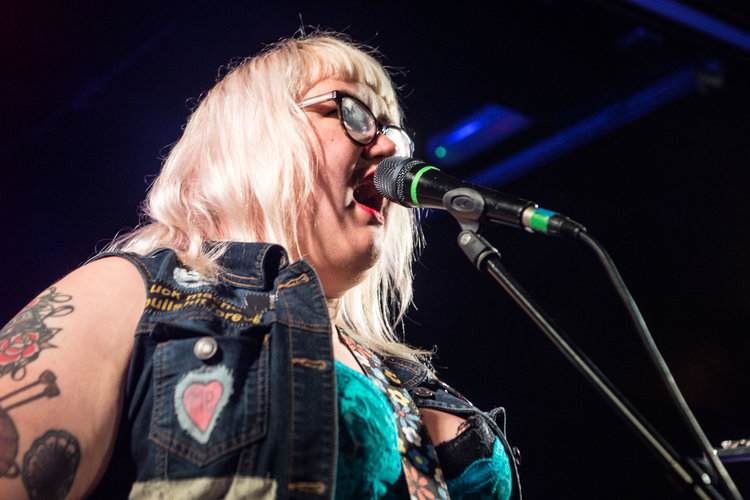 Next up on the bill was Queen Zee, a band I had seen before and was very much looking forward to seeing bring their Pink Punk to the stage again. Queen Zee aka Zena “Obscene” Davine took to the stage in full pink tiger print jumpsuit and simply let rip. This band sometimes feel slightly contradictory, the music and performances are so energetic and full of life that it can border on frenzied. However, what they deliver behind all of the high octane vocals are really great tunes that seem to offset the tempo and keep everything on an even keel.

There was even room for an impromptu dance-off as the crowd was encouraged to find themselves a buddy and then led in a dance during one of the softer, moments of the set which included ‘Boy’ ‘I Hate Your New Boyfriend’ and ‘Bonkers’. In true rock and roll style what turned out to be the final number (time waits for no band) was delivered with blood streaming down Zee’s face after a coming together with a guitar. Suffering for your art is one thing but this was a set where they literally gave blood, sweat, and tears, I and every else roared our approval. 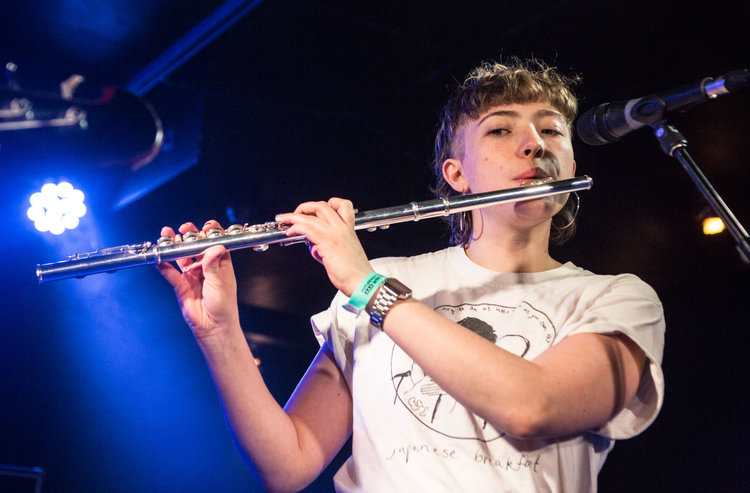 And so onto tonight headline act, London based Dream Wife who brought their interpretation of punk/indie rock to the stage “Are you here to have a good night?” Rakel Mjöll enquired and clearly they were! Opening the set with ‘Spend the night’ the place erupted into a raucous crescendo of noise from the now packed crowd.

The venue, packed as it was, was heating up quickly and in turn, the band was turning up the heat on stage. This is a band who is making people sit up and take notice and it is easy to see why, engaging sultry links, powerful energetic vocals, and glamorous stage presence make them an exciting collective. Performing ‘Fire’ ‘Lolita’ and the very impressive ‘Hey Heartbreaker’ they ripped through the entire set with endless energy and bags of talent.

The whole line up from tonight worked brilliantly and made for a terrifically energetic, screamer of an evening. If you can, go and see it for yourself. You won’t be disappointed.