Lord Huron turns in a spirited performance, bringing souls to life as the season for spooks arrives.

“We’ve always been a ghost-friendly band” quips Ben Schneider. “It’s good to see they’re out tonight especially in the upper levels. They’re going fucking nuts up there by the way” he jokes while he demonstrates an exaggerated style of dad-dancing. It might be a surprise to UK fans of Lord Huron to find the band booked into such an extravagant venue as Sage One in the beautiful Gateshead complex but by the end of their spirited performance there could be no doubting, this is a band who belong on the big stages.

Other venues on this leg of the Vide Noir tour have been as varied as any the band has ever played; from a night at London’s famous Roundhouse to the obscure Sheffield nightclub, Plug the night before their appearance in the north-east. Schneider points out that they’ve never played on this side of the river before and it seems by the crowd’s response that they’ve also traveled from outside the local area. This is the second round of touring in the UK for Lord Huron this year and they’ve made certain to cover new territory once again, bypassing Manchester in favor of Liverpool, and leaving out Scotland, Ireland, and Wales altogether. It’s perhaps unsurprising then to find rows of empty seats in such a grand concert hall, for a band who typically fly under the mainstream radar, however, this void in no way diminishes the band’s performance. The energy radiating from the stage throughout their set is just enough to reach the souls at the very back of the hall without black-braining them in a cacophony of distorted guitars, storming bass, luscious harmonies, turbulent percussion, and eerie theremin. All these sounds exist within the space but never is one found wandering aimlessly. 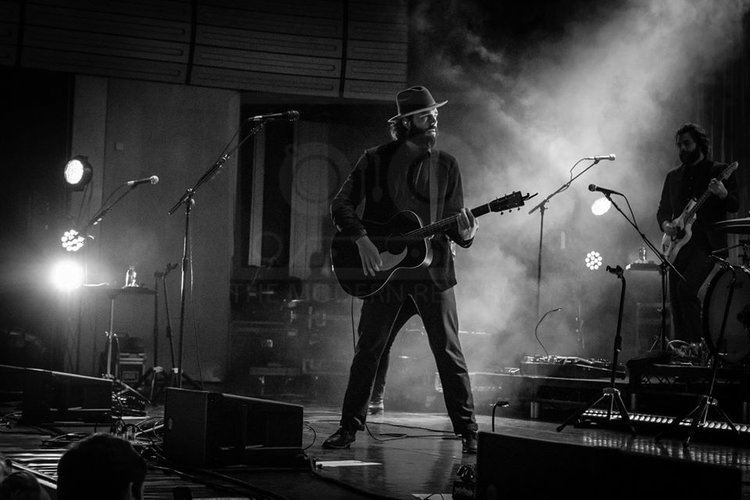 The set is heavy on tracks from the latest release, “Vide Noir”, which sees the band experimenting a bit more with the dark side of studio magic. There are times before the band first emerges on stage and at occasional intervals throughout, where a mysterious voice urges listeners to “follow the emerald star” while a jazzy lounge tune grooves in the background. These mellow moments are offset by Schneider’s resonant vocals and Miguel Briseño‘s pulsing bass. Opening with the buoyant but chorus-less teaser Never Ever, the band lay their intentions bare: We came to rock! The feeling is mutual, at least on the floor where punters are bouncing around, fists pounding the stratosphere in attempts to reach a heightened state of elation.

The World Ender is a dark and brooding tale that brings everyone crashing back to barren earth, unsure how they arrived and curious to see what fates await. Meet Me in the Woods continues their journey into the unknown before emerging through the black magic of Secret of Life and the character study of a chance meeting with an undead World Ender in Dead Man’s Hand. Schneider’s hair refuses to be contained beneath his fetching fedora and the hat meets the ground at regular intervals as the band lift off on more raucous songs like Back From The Edge and Ancient Names, Pts. 1 & 2. There are also times when Schneider removes his headwear for romantic effect as on the crooners Wait By The River and When The Night Is Over. There’s a sonic theme to these songs on the record that is well-spaced in the live set, always keeping the crowd in anticipation of their next wayward turn.

The echo of an owl, a distant thunderstorm and crackling campfire lead into a string of crowd favourites from the band’s debut LP, 2012’s “Lonesome Dreams”. Ends of the Earth, Ghost on the Shore and She Lit A Fire instantly transport devoted listeners back the band’s earlier explorations while providing an atmospheric shift in the tone of the evening. It’s subtle but cleverly crafted. Moonbeam and Hurricane stir up the crowd with additional guitarist Brandon Walters and keyboardist Misty Boyce having their own dance-off either side of drummer Mark Barry. It’s a fun set and the audience can’t help but catch the vibe too. 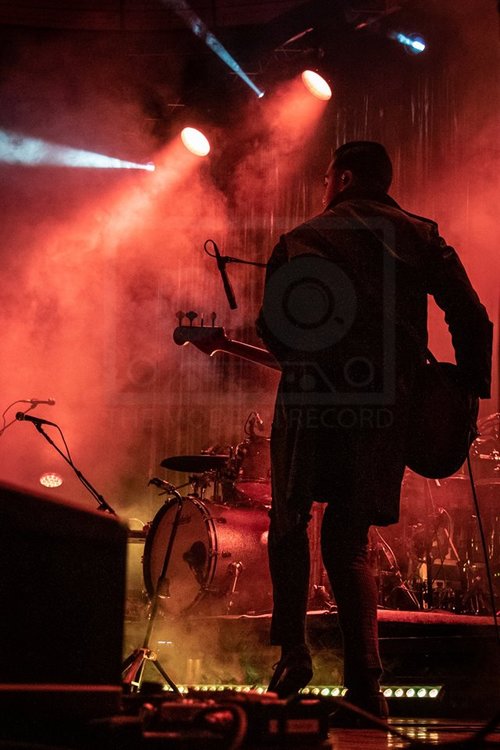 Between the pulsating green lights that silhouette the band on the Ancient Names twin-set, there’s a romantic interlude from “Strange Trails” in the form of La Belle Fleur Sauvage and Fool For Love which sees Schneider throwing flowers into the audience before accepting certain death in a bar fight over the object of his affection. It’s the kind of dramatic contrast fans have come to expect from the last two albums and it’s well-received by the audience, by now hustling to keep up with the twists and turns of the night. Way Out There takes them gently by the heart and leads them through the dark spectral landscape. The set winds into its natural close with Time to Run. The energetic acoustic anthem is embellished with flourishes of Tom Renaud’s gloriously crystalline guitar, playing out the main set before another haunting voiceover recites a poem composed explicitly for the Vide Noir shows featuring, among its lines, every song title from the album. It’s weird but it fills the void left by the band’s departure.

There’s no need for an awkward, forced encore – not that the crowd wasn’t demanding one anyway – and when the band re-emerges from the darkened recesses at the edge of the stage they bring yet new energy with immortal hit The Night We Met. The song has been popularized by its use in various TV drama series but the core fans knew it as the bittersweet album closer to “Strange Trails” over 3 years ago. On this occasion, there’s a hopeful sense that Lord Huron will return to UK theatres of this scale in the not too distant future, to wow new audiences with their unique stories, curious characters, and vivid soundscapes. Nothing could exemplify this more than the jubilant finale, The Stranger. Delighting their audience with arguably their most successful single and following it up with one of their least known tracks is the kind of stunt a band like Lord Huron can pull off in any setting, such is their devoted listenership and the inspiring diversity of their catalogue.

Rumours of another turn through Europe next year have left fans hanging on the edge of the known realm, aching to see what mysterious encounters lay beyond.