It’s a Brave New World” – The Blinders present their ‘Columbia

Named after the heaven or utopian state that Charles Manson promised his “family” – ‘Columbia’ a debut album is a dark and broodingly twisted masterpiece. Tom Haywood stands as a formidable figure in thick blackface paint – he stares directly at you, the whites of his eyes more prominent are resting in the dark recesses. It’s an intense experience at the front of a Blinders gig, and we are here at my favorite venue in the UK – The Leeds Brudenell Social Club. Beer is cheap, there is a great view of the stage which is placed in a corner of the room and the surrounding raised areas are as packed as the moshpit in the front.

First, though, some sweet sugar before we get to the sourness – Calva Louise is the main support for some of these Blinder’s dates and a fine band they are too. Lead singer/guitarist Jess Allanic and bass player Alizon Taho are fair bouncing all over the small stage. Jess is wearing a short dark pleated gym skirt that if it were white would be something Virginia Wade used to play tennis in, but as she is kicking the air every 5 minutes you realize it’s an essential part of the image. Outrageous is as catchy a chorus as you will find that is just “la..la..la..la..la..lah” repeated over and over again. It is all high energy alt-pop, with Jess’s vocals switching from twee girly to full-on screamo. It is a nice shock to the senses though as these pop tunes switch midway to almost punk creations, the sugar kicking in like three 5-year-old kids on a Haribo high. The steam rising from drummer Ben Parker as Getting Closer blasts off and Allanic’s head is shaking, her hair is all over the place. Infectious, endearing, and sparkling energy means lots of smiles and reasons to check out Calva Louise while they are still playing these small venues. When their album Rhinoceros is released in February next year there will be many more opportunities to go and witness this punky pop threesome in action. 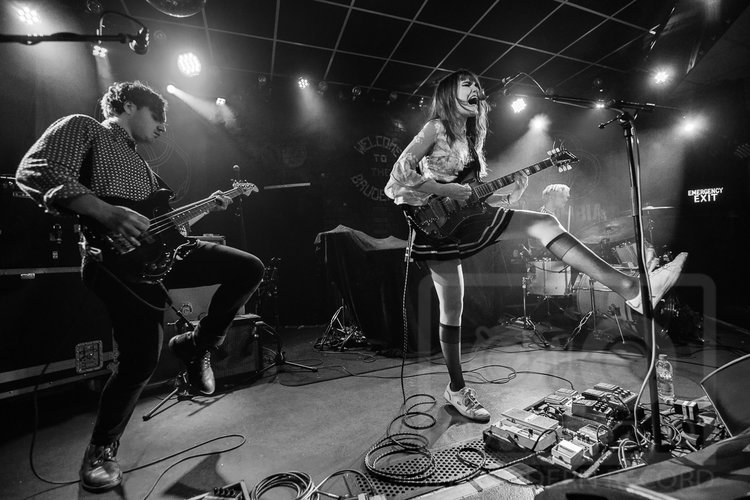 As the white noise wails, the lights go dim and a distant Gene Wilder is singing Pure Imagination from Willy Wonka, we hear a description of this alternative dystopian world called Columbia, and then out walk The Blinders. A great opening as you can really feel that this is about to get very interesting and already drummer Matty Neale has got his fixated stare at the front rows of fellow ‘Columbians’. Bass player Charlie McGough is looking the coolest, suited and booted and all in black, one-foot resting on the monitor. Finally, black-eyed Tom Haywood appears with a bottle of wine, he takes a quick slurp before pulling on the Stratocaster and orchestrating the congregation chant of Gotta Get Through. This is a hypnotic piledriver of a track, all mesmerizing pulsating drums, and a repeated chorus. Intense is a word that describes the next hour as you are not really sure what they will do next.

How many other bands from Doncaster have a song that opens with a French phrase, and not since “Ca Plane pour Moi” in the late ’70s has it been sung back to the band in a Yorkshire accent. L’Etat C’est Moi (or in Yorkshire “Le Tat Sem Wah”) is immense, “I’ve got divine right, I’ve got divine right” Haywood spits and sweats the lyrics from every pore, and the crowd is creating mini circle pits timed with the ferocity of each track. Elbows, shoulders, and legs kick out in every direction, we’ll be battered and bruised by the end of tonight, but it will have been memorable.

Probably the most commercial track – Brave New World has some Adam & the Ants styled tribal rhythm drumming from Neale whilst snarling and still staring manically forwards. It’s quite a funky track currently being used by William Hill for an advert but gets these lyrics “Worship to the call of the idiot king as this Brave New World rears its ugly head, mother told me it’s us or them. A visualization of humanity that depraves our humanity. From Poll Tax laws to Soviet Wars, they drown out the howls of those they deplore”. Powerful stuff, particularly when it is being screamed at you by a man who is just 2 feet away, wearing tribal war paint dripping down from his eyes to his chest. 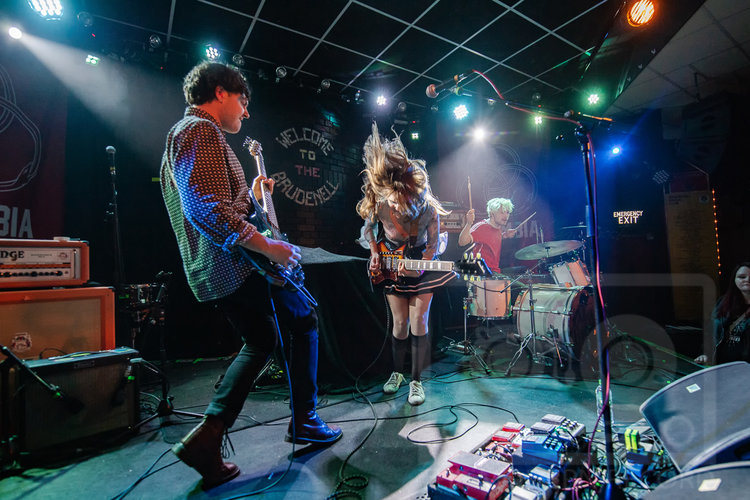 Haywood jumps into the crowd and immediately is in the center of a mob, he grabs various people screaming into their faces, leaning into the crowd he lifts the mic above his head and lets the faithful fans pull him back to the stage. As if this could get any more emotionally expressive, he does it again, this time bringing his guitar for the ride.

As a three-piece they are a significant force, visually exciting – you don’t take your eyes off the stage, politically charged with plenty to say for themselves, and as live musicians packing some serious punches with every track. The high point for me is Et Tu and Brutus, the first is a short sharp shock with everyone shouting “Et Tu Brute” as if they were all playing Caesar at Shakespeare’s Globe. The second is a lengthy monster, building with every minute but never boring, as Haywood drops his guitar and leads a tirade of angst about the state of the world. Culminating in the rest of the band leaving the stage as he remains writhing on the floor still playing his guitar. Haywood stands up, and after a moment to untangle the wires of his guitar pedal, he delivers a beautiful solo version of Orbit (Salmon of Alaska) a surprise twist right at the end of a set of thumping rock and punk future classics, a moment of clarity and pureness after the energetic ferocity.

The Blinders are everything we need right now, and their secret is slowly leaking out into the commercial world – I just hope they don’t lose that uniqueness when the breaks come (and they will) and they find themselves in front of tens of thousands rather than the few hundred packings the Brudenell tonight. Welcome to Columbia – please stay awhile!