Supporting King No-One this evening are two local bands in Luna The Professor and Facendo Cose.

Taking to the stage first are Luna The Professor, a 4-piece indie alternative rock band who formed in March 2017. For a band so young in both age and existence they waste no time in getting the crowd on their side during their short set.

They seem to have it all, the exuberant lead singer in Johnny Irwin, who also plays a mean guitar, the solid quiet bass player, Dave McNally, and the unusually quiet, in everything but volume, guitar player Ross Caldwell. Completing the line-up is the man behind the kit, and boy does he hit those skins, Eamonn Kelly. 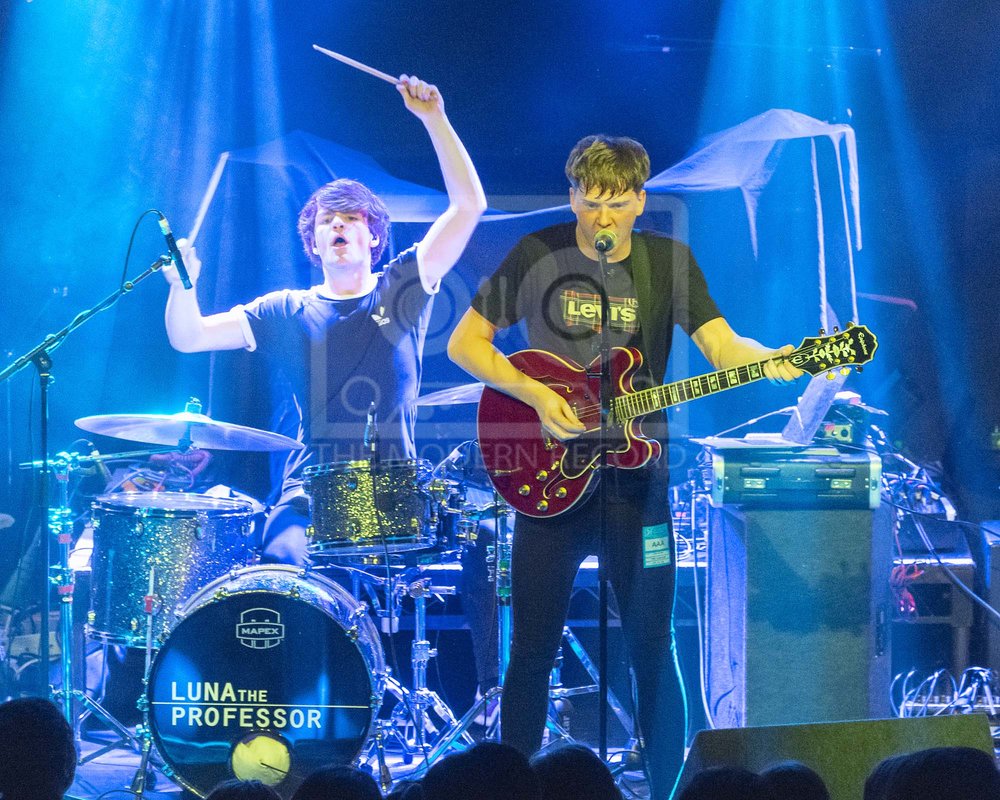 From the moment they hit the stage with the track ’Alone,’ the following the band have brought with them tonight, are all ears. Frontman Irwin, seemingly with the wave of his hand, has the entire crowd sitting down on the floor of the venue before commanding them to stand again.

With well-crafted lyrics and music, this is a band that wants to party in their live performances and want the crowd to join in and have just as good a time as they are having on stage.

Leaving the stage with the track Dreamers this is a band with plans to play lots of shows and get some music out there. The best way to describe them is as a band with an electrifying live presence and a bright future in front of them. The sooner they get their unreleased material out there, the better.

Next up is the Glasgow band, Facendo Cose. Formed in 2017, this 5-piece funk and soul band are the welcome calm of the storm between the pop/rock bands of tonight’s bill. 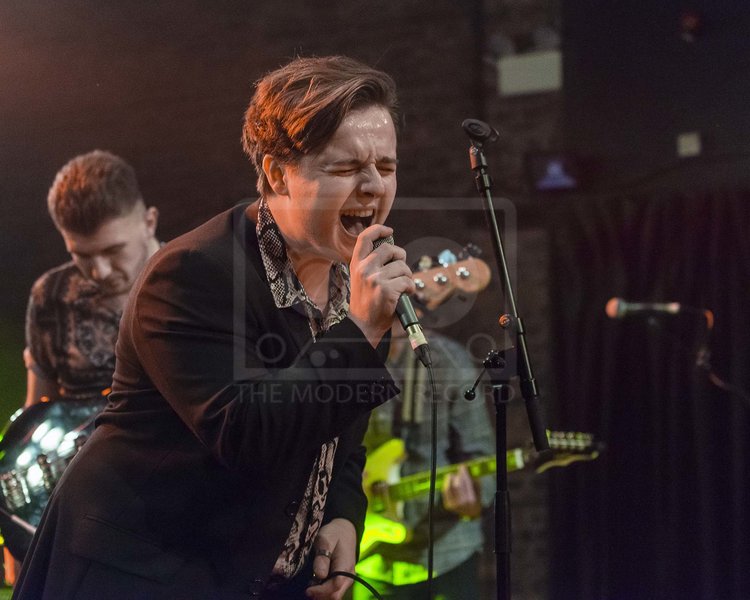 With their silky-smooth laid-back style, vocalist Peter Clark has the kind of voice you could listen to all night and has the personality to match.  Twin guitarists Liam Glancy and Kevin Henderson, on rhythm and lead respectively, are the glue that keeps the sound moving forward.

Bassist Conor Boyle studiously backs that rhythm up with his relaxed style whilst drummer Gerry McCusker keeps time beautifully to compliment the other musicians on stage, reminding me of the little-known blues and funk recordings by Rolling Stones drummer, Charlie Watts.

Not afraid to play unreleased material amongst the those from their debut EP ’Pilot’, the stand out tracks from their set are drawn from that release, a particular crowd favorite being ’China Town Flat’ which personally took me back to the soul clubs of New York in the late 90s with its instantly listenable lyrics and amazingly catchy melodies.

Leaving us at the end of their set with ’Try It On’ from their EP, this is a band who fuse the funk and soul genres together perfectly to entertain a crowd who are perhaps not so acquainted with the more laid-back style on offer.

King No-One take to the stage at The Garage in Glasgow with the confidence of a band who have honed their craft and musical ability over years of arduous touring and street performances. 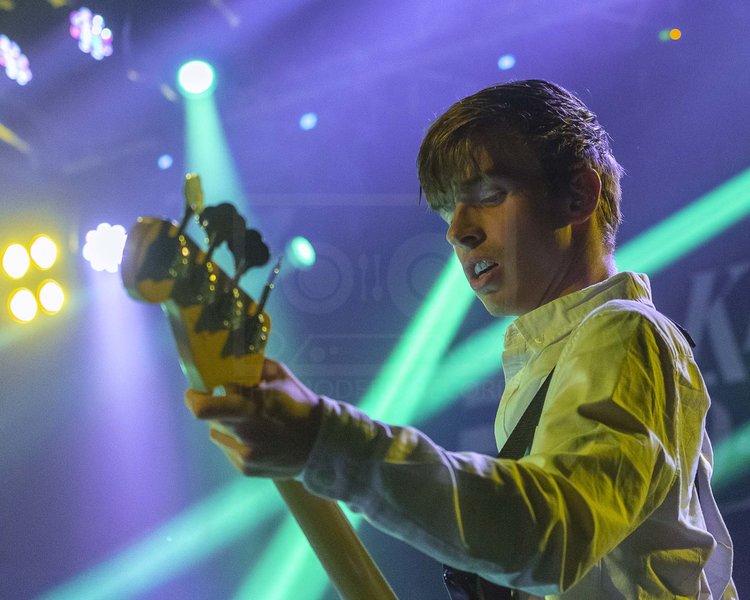 Perhaps it is those endless gigs in smaller venues coupled with the relentless street performances in support of upcoming tours, their appearances at events such as the Leeds Festival, their support slot to Embrace in 2014 or their appearance in Glasgow as part of the TRNSMT festival, but here is a band who are quite rightly reaching for bigger things and seem to know exactly how to they are going to get there. The gig this evening is the biggest solo gig the band have undertaken North of their home area of Yorkshire and the crowd who have braved the cold November Glasgow weather are looking to King No-One to warm them up for their journey home

For a band who have been together a little over 5 years, they exude confidence well in advance of their still fledgling status. Having been described in the media as compelling this is certainly a true assessment as Singer Zach Lount explodes onto the stage dressed in red leather trousers and matching bright red jacket.

Shirtless below his jacket, Lount has his trademark etchings on his chest and face as the band launch into their opening number ’Millennium’ which immediately sets the predominantly teenage female crowd into fits of hysterics.

With its slowly building beat, the crowd is already reaching out to touch Lount who is already prowling the stage from corner to corner, guitar in hand, as he interacts with the crowd.

Reminiscent of a young Bowie or Mercury, Lount is a charismatic overload, and instantly likable with it in his familiar semi-naked teen heartthrob role. The remaining core members of the band are somewhat quieter, though equally as present on stage, seemingly happy to let Lount take the lead at every opportunity.

Many bands avoid tackling the seemingly difficult issues of life and whilst the music being played this evening is a mixture of pure pop mixed with a little rock theatrics and strong lyrical content, there is often a deeper hidden meaning in the lyrics.

Rather leave their music to do the talking, King No-One are the antithesis to this, taking time out to remind their fans what they, as a band, stand for. King No-One means everyone is born equal No one is King. Equality is a key theme here as a short speech regarding the irrelevance of skin color, gender, sexual orientation or financial status in defining the person that you are follows. This is hard-hitting but entirely relevant and is clearly taken on board by those in the crowd who roar their approval of this. 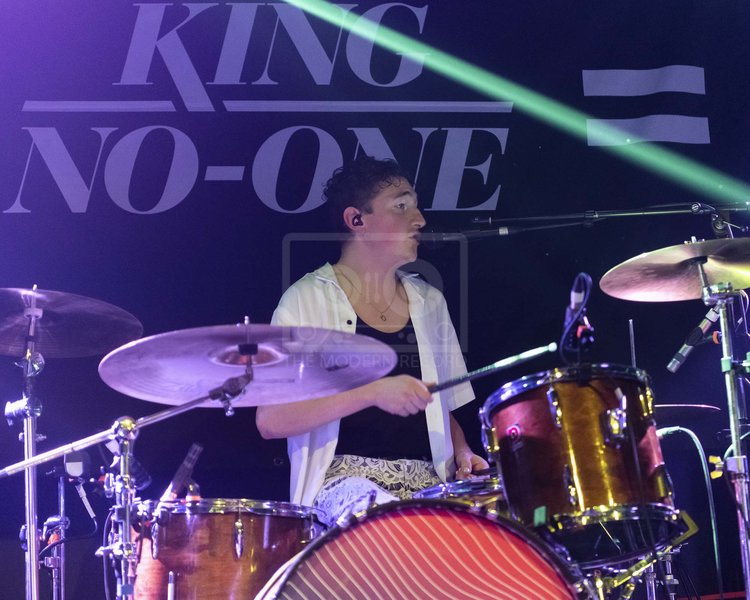 The intensity level of the crowd reaches a fever peak when the new single ’Out Of My Mind’ is given an airing, the young crowd jumping up and down in unison in a manner normally reserved for harder rock gigs. The stagecraft and musical ability of the musicians on stage really shine through on this new track which will no doubt become a staple of their live performances in the future.

The one real ballad of the evening, ’Dying Wish’, follows, a duet shared between Lount and guitarist Joe Martin, which calms the crowd slightly as Lount announces that they only have a couple of more songs to play.

With girls from the crowd raised high on the shoulders of other crowd members, some vocal interaction from Lount ensues with them as a slow keyboard intro quickly merges into the stand out track of the evening in ’Alcatraz’, the one track everyone has been waiting for. The entire crowd, from front to back, goes wild, jumping up and down and swaying back and forth. By this point, Lount has stripped off the jacket and is leaning over the barrier touching hands with members of the crowd who are eagerly trying to grab on to him.

Remaining shirtless Lount announces there are no encores as the band prefers just to play the music and that going off stage to come back on seems pointless.

The last track of the evening is 2017s ‘Antichrist’ as, returning to the theme of equality, Lount explains that this is a song of empowerment for everyone who has been repressed by humanity.

Knowing it is the final track of the evening the intensity of the crowd exceeds the previous threshold with screams from adoring fans spreading throughout the building as Lount goes one stage further and surfs across the front area of the crowd before making his way back to the stage to bring the song, and the set to a close.

King No-One, a self-promoted band with no major deal, have done themselves no harm this evening and are surely bound for bigger stages in the near future. The crowd leaves the hall into the cold night thoroughly warmed up for their journey home.