After years, Mumford and Sons, make a triumphant return to Scotland, playing a stunning quality performance that audiences will talk about for months to come.

The band’s sell-out show at the modern venue, the hydro was beautifully performed and reminded fans how Mumford and Sons quickly became a house-hold name with four sensational albums under their belt and dozens of awards.

In 2009, Mumford shook the country and the states with their ground-breaking number one debut album ‘Sigh No More.’  They’re known for a folk-rock style yet it is ever-evolving and their most recent album, 2018’s ‘Delta,’ shows the biggest changes in the band’s sound as they introduce hard rock elements with guitar-heavy tracks that one might not associate with them due to their bluegrass past.

Huge Glasgow venue, the Hydro, hosts only the biggest shows. With a 13,000 capacity and a floating stage allowing for 360 degrees viewing for those in the standing section, visiting here is a treat. As the large room filled up with excited fans from all walks of life, it was obvious this show was heavily anticipated.

Before the main event, we had Maggie Rogers. From the get-go, you knew she was going to be the type of activity that you wouldn’t necessarily call a support act as she had every single right to own the arena stage. An artist who is passionate about every single beat of her music and every single lyric she sings is felt not only by her but by everyone else who’s in the room with her.

It was like the stage was her home, it’s where she felt most comfortable dancing with and around her band, making a statement of ‘this is who I am and this is where I am meant to be.’ An upcoming artist from Maryland and with her full-length album Heard It In A Past Life due to be released in January, Rogers made sure that with every single beat of the drum and chord played, you were brought into the little bubble of Maggie – even if it was short-lived. Hit singles Fallingwater, Light On and Give A Little proved popular with the crowd who danced alongside Maggie, who twirled and spun her way into people’s hearts and most certainly into people’s playlists.

Opening for Mumford and Sons on their European leg of their Delta tour is an incredible opportunity and for Rogers (who is embracing on a UK tour next February) it goes to show that people may want to have the moves like Mick Jagger, I say move like Maggie Rogers, dance to your own beaut and always be the three F’s: Fresh, floaty and fascinating.

At points, the crowd was in awe of her stage presence, gracing the crowd at both the front and back of the stage (due to the stage set up) and building up a connection that some artists fail to do. If you witness a Maggie Rogers show, embrace in the atmosphere, prepare to bring your dancing shoes, and make sure that your clothing is suited to shake your own kind of groove in – that’s the only way to watch a Maggie Rogers show.

As Mumford & Sons took to the stage, bathed in purple smog, applause exploded throughout the room. New beautiful ballad ‘42’ sounded out and despite the track’s freshness, it’s so reminiscent of the band’s early style, it went down a treat with the crowd. Then they launched into classic, loved, earlier tracks ‘Little Lion Man’ and ‘Lover of the Light,’ and the crowd started to jump. The quality of their sound was exceptional. The stage was filled with instruments as one would expect with Mumford and Sons. With a fiddle, a banjo, a double bass, a piano, a keyboard, multiple sets of drums, a trombone, and a trumpet; the band gave their viewers a lesson in musical skill. Their members jumped between instruments, sometimes even changing their instruments in the middle of a song. 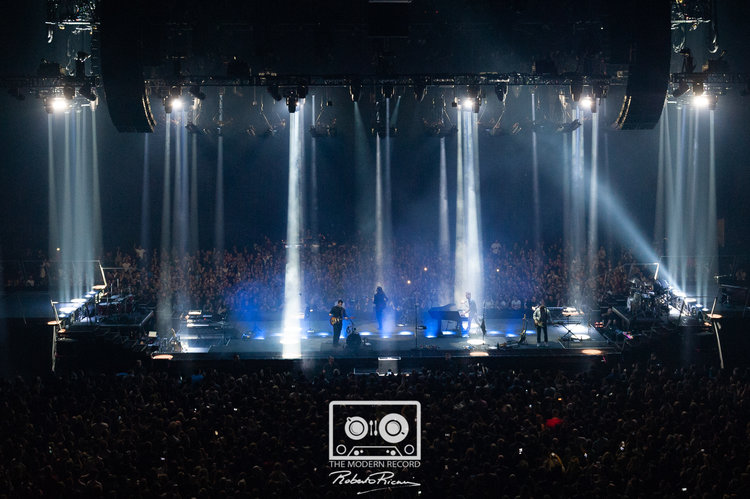 Band singer, Marcus Mumford, is charming on stage. He shows a sense of humor, laughing and joking with the crowd and talking about his love for Scotland. At one point during the show, he even remarks about the Scotland game being played at the same time and celebrates along with the crowd when the Scottish win is revealed to him. As well as this, the band has a lot of visible chemistry between there members. Smiles radiated from everyone on stage, the heart-warming glances between members show how brilliantly these musicians work together and the support they provide each other.

The stage lights drop and the band launch into new track ‘The Wild,’ a soft, delicate, uplifting track that is very moving and perfect for anyone going through a traumatic experience. Soon after the stomper ‘Babel’ starts and the crowd’s reaction is ecstatic.  To see so many fans that this performance clearly means so much is powerful. The sights around are of so many transfixed people, seeming to know every word to every song; so many arms seeming constantly thrown in the air in pure delight and gratitude.

Another beautiful new track to mention is ‘Beloved.’ This powerful ballad was performed emotionally and shows some of the band’s evolution away from their completely folky beginnings. ‘Tompkins Square Parks’ has an undeniable indie sense to it. But it was classic tracks like ‘Belief,’ ‘Guiding Light,’ and ‘The Cave’ that crowd really responded to. The power in these emotional ballads is hard to ignore and with the raw sentiments in these song’s lyrics, it’s hard not to be touched by their meaning.

Also highlighting the performance was the two striped backtracks, performed with only the band members gathering around one microphone and harmonizing together to play ‘Timshel’ and ‘Sister.’

New track ‘Darkness Visible’ stood out for its heavy distinctness from the band’s conventional style. With heavy guitar, unique audio cutting, this track is unexpected from Mumford and Sons. But this is showing the band progression and how their style will continue to evolve.

With fireworks and a breath-taking visual display, the Hydro managed to meet the epic requirements of hosting such a successful band. The night was exceptional and Mumford and Sons proved they have the longevity, skill, and attitude to make them one of the most successful bands of this generation. 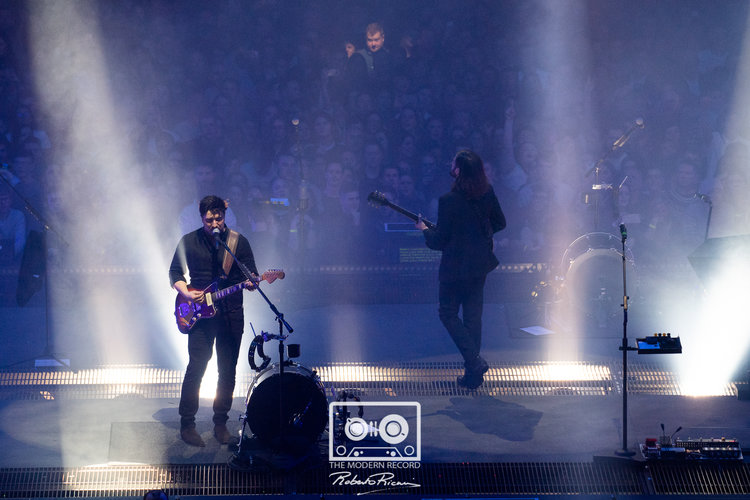 THE MODERN RECORD INTERVIEWS: ‘THE MUSIC OF CREAM – MALCOLM BRUCE’