The Decemberists craft a solid live set of indie-folk around new electro-infused songs with endearing warmth, light, and humor.

It’s an unexceptional Monday night in November that sees an audience gathered in the expansive darkness of Glasgow’s O2 Academy. It happens to be Bonfire Night which seems as good an excuse as any to stand around and listen to folk songs, and for this occasion, you’d be hard-pressed to find a more literary story-teller than The Decemberists’ Colin Meloy. The communal spirit that his band embodies is alight in their followers too, and from the moment the band walk on stage there’s a warmth in the air. Fans haven’t just come to bear witness, they’ve come to take part.

A joyful opening set by Philadelphia’s Hop Along is encouraged despite the contrasting weight and density of the two band’s sounds. The overall energy is well matched and there can be no doubt the responsibility of the “warm-up act” has been fulfilled.

With his harmonica poised Meloy gives a gracious welcoming salute as the rest of The Decemberists take up their positions.  Don’t Carry It All draws directly on the crowd’s in-it-together attitude with some vibrant singing and clapping along right from the outset. It’s apparent early on that fans are elated to see the band again, as song after song is received in similarly boisterous fashion. The first half of the set builds momentum with some catchy choruses and powerful imagery. Blending new songs with the older catalog happens around some of the more angular melodies; Cutting Stone into Shankill Butchers and despite wheeling out these darker themes early on the feeling in the room remains upbeat. 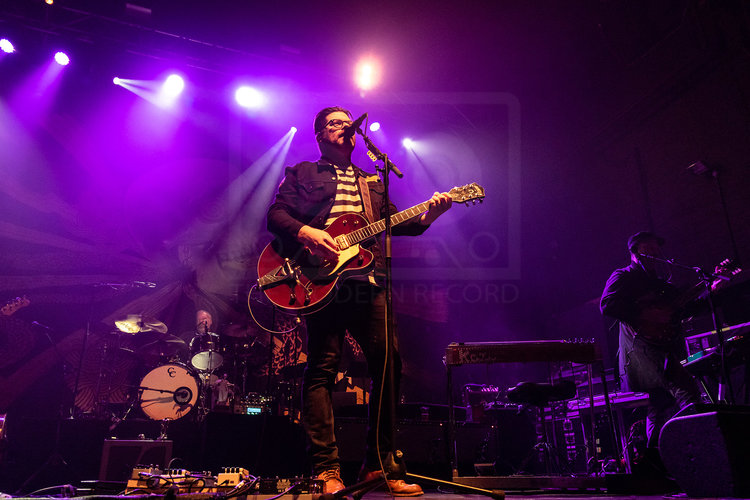 The Decemberists have a delightful knack for masking miserable tales behind jaunty mandolin and accordion but they also present honestly dour folk, as on the plaintive The Engine Driver which features two 12-string guitars for added pathos. This turns the midset into a rather gloomy interlude and yet the crowd responds with ever-growing enthusiasm. “How about a song about the end of the world then?” offers Meloy before launching gleefully into Calamity Song. It’s a considered about-face of sorts, giving a glimmer of hope for at least sonic redemption before plunging deep into the grand tragedy of The Crane Wife 1 & 2. This song has possibly the subtlest build of any folk-rock song to feature a xylophone solo and is followed unnaturally and yet obviously by The Queen’s Rebuke / The Crossing from 2009’s exceptionally heavy “The Hazards of Love”. The whole mood turns on this number as the lighting becomes dark and red, the sound is distorted and there is even a guitar solo!

From this point, the brilliant synth-driven Severed introduces a suite of songs from the latest album “I’ll Be Your Girl”. We All Die Young includes a necessarily tutored call and response bit of audience participation as well as an inappropriately uplifting sax solo. The band is beyond reach now, so elevated in their jubilation and commitment to giving a great performance. The grimmest tales of seduction, drowning, and vengeful murder inside the belly of whale spur them on and the audience acquiesces with equal fervour.

Outside it remains an unexceptional Monday night in November but those in the dark of the Academy know it to be otherwise. 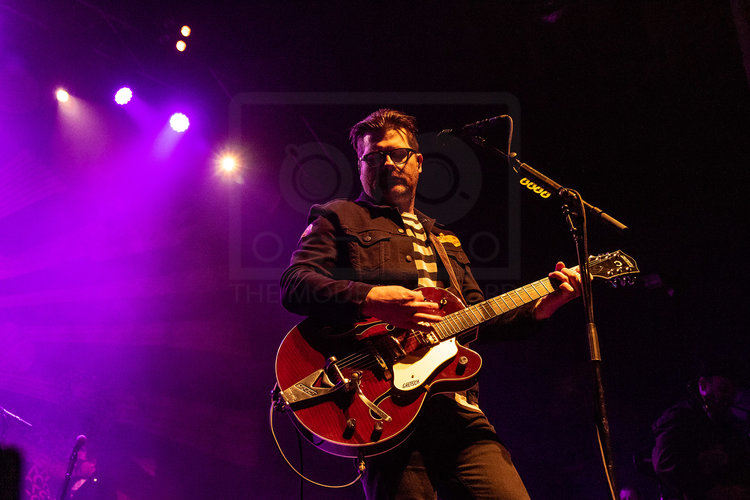