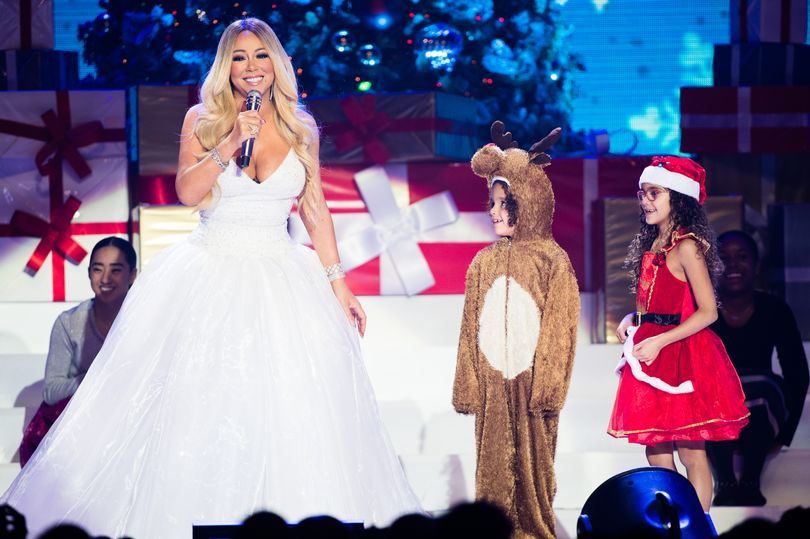 Octave busting Mariah Carey rode into town, (presumably on Santa’s Sleigh) on the second night of her 3 dates UK Christmas tour, to deliver a slightly mad, but enjoyable performance to a full audience at the Leeds arena. Unusually there was no support for her tonight, but she is a premier league performer!

Now it would be very easy to be cynical and dismissive of this show, but you can’t deny the girl can sing. Don’t forget she’s been doing this for 30 years now, so she knows how it’s done. Christmas and Mariah Carey go together like turkey and stuffing and this tour, of course, featured many tracks from her 3 Christmas albums as well as traditional carols, all of which went down an absolute storm with the crowd.

At 8:45 on the dot, the huge red curtain dropped to reveal a stage that I think would be best described as a Christmas grotto designed by Willy Wonka and Disney. Depending on what you read Mariah Carey is either 49 or 48, but one thing is certain vocally she’s still up there with the best of them.

What followed was a romp through Christmas standards ably supported by a supremely talented backing band including 3 vocalists who were equally outstanding. Of course, there were the obligatory outfit changes (3 if correctly recall) during which a gospel choir and Trey Lorenz delivered ‘Jesus what a wonderful world’ which was one of the highlights of the evening.

It has to be said that unlike a lot of bands I’ve seen over the last year or so, she was at least engaging with the audience. A couple of times throughout the evening she brought on her twins (7 years old) and had a chat with them about what they wanted for Christmas, and it would seem that IPads are top of their list!

‘Hero’ from her ‘Music Box’ album which has become a karaoke classic was ecstatically received by the audience who were of course really there for what has now become one of the biggest selling Christmas tunes of all time, and she didn’t disappoint. ‘All I Want for Christmas’ featured dancers, the gospel choir and of course Santa himself bringing the evening to a spectacular close.

All in all, this was an interesting night, and to be perfectly honest not one that I would normally attend, but I like to keep an open mind on all things musical. To be fair to her, she delivered on every level in terms of visuals and music for her adoring fans who loved every minute of it.