Strange Bones and Rascalton put on a night to remember, complete with Download festival level moshing and a sweaty, bouncing after party.

There was something about the night. This feeling filled the air as folk started to pile into Glasgow’s St Lukes, everyone knew they were in for a good night. Upon arriving at this wonderful converted church turned venue, age-appropriate fans were given after-party access wristbands.

The crowd was distinctly youthful and preppy for such a hard gig. But I would guess this down to a shift in expectations and the incoming freedom of expression, particularly in the youngsters, in this ever-evolving modern world. No longer are metal gigs filled to the brim with black clothes and beards. 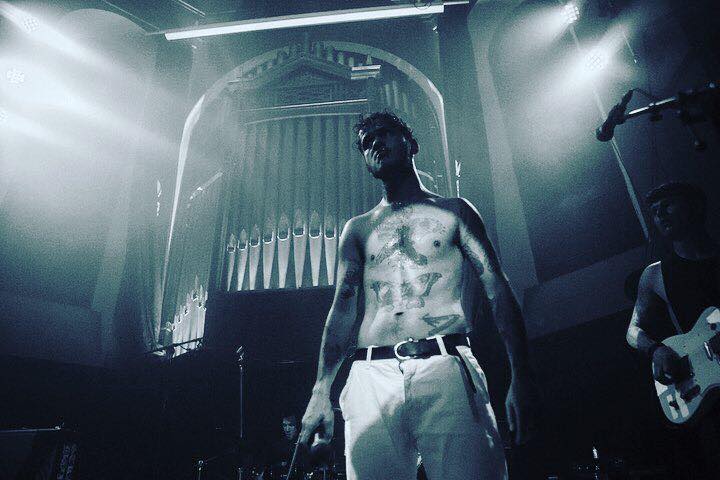 Rascalton is a Glasgow formed punk band that packs a hell of a punch. Calva Louise performed an amazing set as well.  This London trio sounded fantastic. They performed with such energy and passion. The strength of the relationships between band members was incredibly obvious as well as their love for the hard sound. Calva Louise and Rascalton are definitely two up and coming groups any fans of Strange Bones should be aware of.

When Strange Bones, SB, took the stage the crowd was warmed up and ready to let completely loose for their main event of the night. This trio from Blackpool took to the stage as they owned it. Their unapologetically loud, distorted sound is a mash of classic and modern punk with influences including The Cramps and UK SUBS along with Rancid, Rage Against the Machine, and Idles. The crowd knew what they were in for, space was already cleared and the moshing began straight away.

SB is fronted by Bobby Bentham. He gives the band their wow factor. He makes their gigs an experience for fans like no other. During the show, he dons various masks. I think to play on the anonymity of their angry punky sound. Their anger is universal for everyone, linking to a part of us all. Through these masks, Bentham evokes the viewers’ fears – the hidden and the unknown. Bentham also knows how to impress a tough crowd with his antics. He was frequently off the stage and right in the thick of the crowd. He was stage diving and moshing. He sang directly into the faces of the fans.  Viewing SB from right at the front is a must for any attendee of their gigs.

Band members Spud Newburn and Jack Bentham’s performance was hard to flaw though eyes were constantly being drawn to the band’s frontman.

The most standout songs of the night included – ‘Pussy Galore’s Flying Circus,’ ‘God Save the Teen,’ and ‘We the Rats.’ The band did not carry out an encore but hosted an after-party in the venue after the night’s gig.

Strange Bones are a must-see for any metal, punk, nu-wave, alternative music fan. Their live shows are where they hold their own, where they give a performance that shakes the viewer, whether the viewer wants to head-banging or not.