MGMT rolled into a rain-sodden Leeds as part of their UK ‘Little Dark Age Tour’ album which was released on Feb 18. Since then there has been a full remix of this album, released on Sept 19 done by Matthew Dear who provided the support for tonight’s gig.

Matthew Dear delivered what I can confidently say was one the LOUDEST support slots I have ever heard at the Academy, and his rumbling minimal techno bass-heavy set was well received by the crowd. It was the first time I have seen him perform and the highest compliment I can pay him is that he reminded me of James Blake. Dears set featured many tracks from his recently released ‘Bunny’ album and I for one was impressed with his set.

Next up were headliners MGMT fronted by their founder members Andrew Wyngarden and Ben Goldwasser as well as Will Berman on drums, Simon O’Connor on bass, and James Richardson on guitar and keyboards. Formed back in 2002 in Connecticut, they have been critically acclaimed for their output over the years and during this time they have also collaborated with diverse acts such as Kid Cudi and Beck.

To be honest they seemed a little somber with their opening tracks ‘The Youth’ and ‘When you die’ and barely acknowledged the crowd. However, to be fair it didn’t take them too long to build up a rapport and there Indie pop/rock style was well received by the crowd. ‘Time to Pretend’ from their debut album ‘Oracular Spectacular’ with the insistent keyboard hook line seemed to light the blue touch paper and created the first singalong of the night.

Bizarrely the front of the stage tonight was fronted by various large houseplants (absolutely no idea why) and an eye-catching video backdrop which in created a rather surreal but interesting experience and actually worked in terms of supporting and enhancing their stage presence and performance. 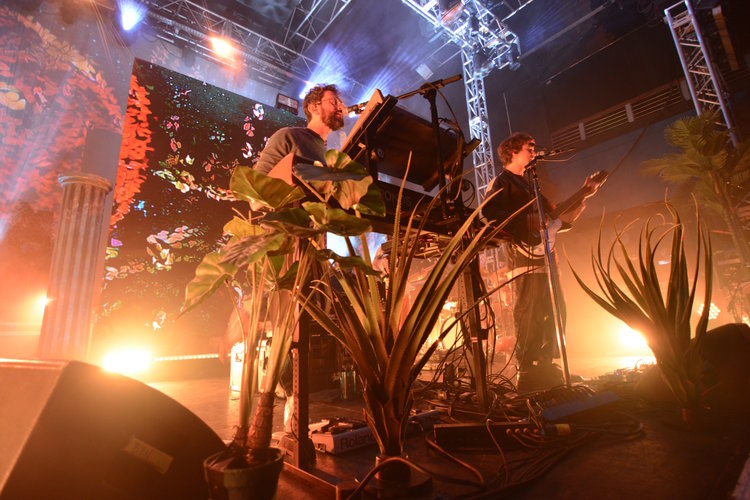 With the crowd nicely warmed up, both Wyngarden and Goldwasser chatted to the audience and of course, there was the obligatory ‘How you doin’ Leeds’. Next up was ‘Electric Feel’ which highlighted just how good this band has become over the years and then it was my personal favorite the infectious ‘Me and Michael’ from ‘Little Dark Age’. This was a highlight of the evening for this reviewer, and again this showed MGMT at their best both musically and vocally and they were once again ably assisted by the audience at the chorus.

Of course, no MGMT gig would be complete without the anthemic ‘Kids’ which I can guarantee you will have heard, even if you’ve never of the band before. This version morphed into a huge dance mix which was another highlight and showed how versatile this band can be.

This brought the main set to a close and the band left the stage smiling and waving at the audience and they had clearly enjoyed their set despite the slow start to the evening. At this point, the reviewer had to leave the gig unable to stay for the encore but I can safely say that this was the band who knows their craft, can deliver killer tunes and is well deserved of their critical acclaim.