A rainy Tuesday night saw a capacity crowd crammed into the cavernous O2 Victoria Warehouse in Manchester to welcome Wolf Alice on their Visions of a Life’ UK tour, and unusually the crowd were treated to 2 support bands tonight in the shape of Vinyl Staircase and New York band Surfbort.

4 piece band Indi band Vinyl Staircase was first up, and they delivered a short, noisy, and tight little set with shreddy guitar riffs and great vocals in a kind of MC5 style which is no bad thing. Keep an eye out for this band, they have been tipped for greatness in the future!

Next up are Brooklyn based ‘Surfbort’, and if you don’t know what that is, Google it!! Fronted by Dani Miller they were reminiscent of punk at its best, delivered in an energetic high octane thrash style. This set also included a bit of audience participation when Dani Miller proceeded to go walkabout in the crowd, to the concern of security staff! 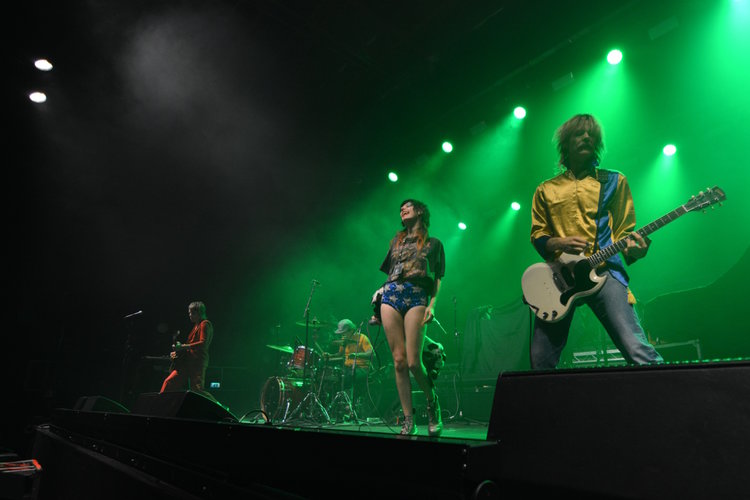 Shortly after 9, headliners Wolf Alice took to the stage to the refrains of a Harry Potter theme, and it was straight into Yuk Foo from their Mercury award-winning album ‘Visions of Life’. This 4 piece band from London who to use a well-worn phrase have paid their dues with extensive touring up and down the country before they had even released their first album ‘My Love is Cool’ which came out in 2015. It was clear from the packed venue that all their hard work and good tunes were now paying off handsomely as it didn’t take long for the audience to roar their approval.

I know that comparisons are often regarded as a lazy cop-out, but in this instance, I’m going to paraphrase a description I read about them, simply because I think it sums them up perfectly. For Wolf Alice think grunge with catchy choruses and folk touches all mashed together to create an almost visceral wall of sound. Ellie Rowsell has a truly great voice and can easily move between a rocky grungy sound and the wistful almost folky sound of Planet Hunter. Joff Oddie on lead guitar is at the top of his game and his style reminded me of Cocteau Twins Robin Guthrie, which as far as I’m concerned is high praise indeed. Theo Ellis on bass is a ball of energy and his frenetic and charismatic style was one of the highlights of the gig. The whole thing is kept together by the talented Joel Amey on drums who along with Ellie Rowsell formed the first iteration of Wolf Alice as an acoustic duo. 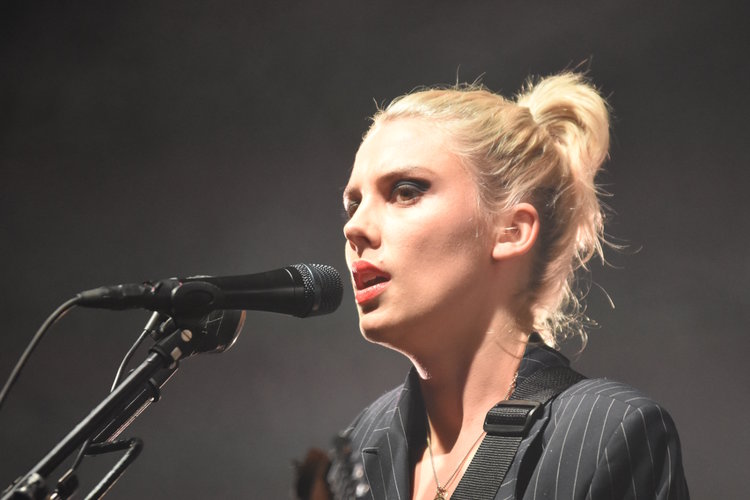 Festival favorite ‘Beautifully Unconventional’ with its staccato guitar and earworm chorus was delivered at a frenetic pace, and crowd-pleaser ‘Don’t delete the kisses’ complete with Ellie throwing out flowers to the audience resulted in huge singalongs and were just some of the many highlights of the night.

Wolf Alice has rightly garnered a ton of favorable reviews both for their live shows and their two albums and their Mercury prize award this year was well deserved. They will go from strength to strength and having got over the traditional ‘difficult’ second album, I look forward to what they will come up with next. At the time of writing, they only have a couple more dates in Brixton before Christmas and will then be taking a well-earned rest.

If you’ve yet to discover Wolf Alice I would urge you to seek out their back catalog. You won’t regret it!