Who are the Wildhearts?

Well, the story goes that the frontman, Ginger, fell down a flight of stairs in a train station after being sacked from the Quireboys by Sharon Osborne.  He made a split-second decision and decided if the bottle of Jack Daniels he was clutching survived the fall, he’d pick himself up and form a new band.

That band became The Wildhearts.

It’s hard to believe this story started almost 30 years ago and tonight we’re here to celebrate the 25th anniversary of “Earth Versus The Wildhearts”; their debut full-length LP and third studio release.

I would probably be lying if I said this album didn’t sound 25 years old.  Given the cult footprint it’s since cemented in early 90s rock music it would be a disservice to suggest otherwise.  It sounds exactly like that moment in history but whilst it continues to resonate with fans of the time it has seen an endless stream of new admirers arrive during its quarter-century existence.   It’s for this reason when the weighty guitar intro of “Greeting from Shitsville” echo’s around the packed concrete TV Studio, I see teenagers and pensioners unite in their enthusiasm for their favorite Geordie.

Those who remember this the first time round are transported back two and a half decades with these tattooed icons under the house lights.

Without blinking they launch straight into the outrageously anthemic “TV Tan” with its quirky riffs and unexpected melodies that catch you off guard.  The band, as it is right now, is probably the most well-regarded and perfect line-up and they prove just how tight they are as they flawlessly deliver one of the most underrated rock songs of the 1990s.

As this is an anniversary tour the running order is no surprise and firm fan favorites “Everyone” and “Shame on Me” are up next.  CJ, as always, is buzzing with what feels like boundless energy, and tonight Rich and Danny might be one of the strongest rhythm sections I have heard live.  Relentless in both power and precision.

It was good to hear “Caffeine Bomb” tonight.  This was added to the re-release of the LP and although it was their first single to drop into the top 40 there wasn’t a guarantee this slice of thrashcore punk-metal would be in tonight’s set.  It’s probably one of the earliest examples of what The Wildhearts do best and shows a seamless melding of punk sensibilities and outrageously catchy pop melodies.  They manage to do it whilst lyrically having their tongue pressed firmly in cheek.

I have to say, it’s great to see Ginger back on stage after some personal battles and recovering from vocal cord surgery.  I guess there is no better cure than standing in front of people who support and adore you whilst seeing just how much you mean to them.  The resounding vocal backing from a thousand “Wildies” doesn’t go unnoticed as we dive headlong into “Love Shit” and “Miles Away Girl”.

These album tracks are as good as any single from almost any other rock band and it’s a shame we don’t get to hear them live more often.  The only reason for that is simply down to the vast and accomplished back catalog this band has to choose from. 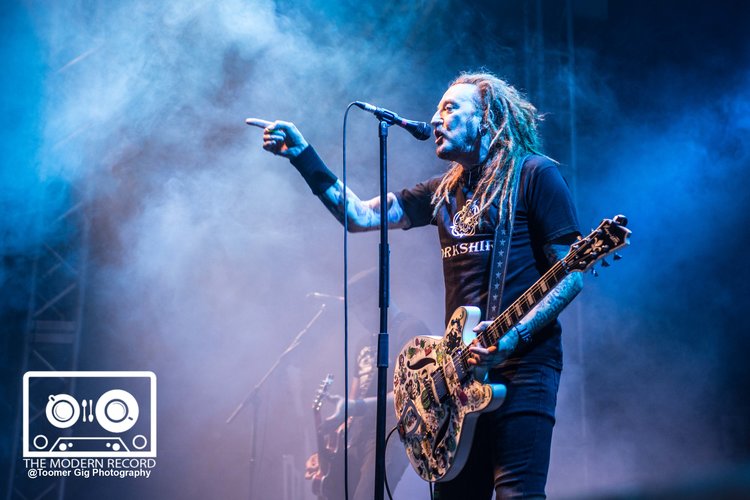 Despite this incredible start we still have “My Baby is a Headfuck” up next and this Ramones-Esq Rock ’n’ Roll monster further lifts the crowd’s capacity to shout and sing before the Chuck Berry fuelled guitar solos spiral towards their glorious finale.

We all knew it was coming, and without time to catch our breath  “Suckerpunch” arrives with the subtlety of a juggernaut.  With its marauding Motorhead style riff and relentless percussion it was going to be difficult for anyone to properly keep up with Ginger on these vocals.

“News of the World”, “Drinking About Life” and “Love U Til I Don’t” closes the set with the latter still feeling like it could have been on an early Poison album.  Thinking about it now I doubt it’s a coincidence given Gingers fleeting ties to the British glam-rock scene.

After a very brief exit from the stage, not even time for a beer, the lads return to perform a festival sized greatest hits package based around their records from the ’90s.“Sick of Drugs”, “Red Light, Green Light” and “Anthem” are among the hits before the band close out with perhaps one of the greatest B-Sides recorded in “29 x The Pain” and the unforgettable “I Wanna Go Where The People Go” The Wildhearts have a massively dedicated fan base and anytime the band takes the stage there is a mutual appreciation.  Tonight the band repaid their tireless support with one of their best live performances I’ve seen.  There are now without a doubt the finest Rock and Roll band I have ever heard.  They are truly the whole package and one of the things I admire most is just how genuine and humble they are.

I remember back around 1994 I said to a friend that Ginger was one of the most important songwriters to come out of the UK.  I’m sure I compared him to John Lennon.

He laughed at me!

Looking back I can understand why but he did but the thing is, I have re-evaluated that statement several times since then and still believe it to be true today.

Ginger’s dedication and diversity as a songwriter are as remarkable as it is staggering and with the rest of the lads in tow, they are a formidable force and an incredible talent.  They deserve much bigger and better things.

The Wildhearts have been linked with several festivals in 2019 and my advice to you is to get out, go see them, and enjoy yourself.