The fans, who fill the SSE Hydro to see the ex-Smiths frontman, seem prepared for a certain degree of showmanship and obnoxiousness. It is Morrissey after all. A series of rolling videos projected on to a massive sheet act as the warm-up or support act whilst there is an enforced meat ban in the venue – what should I have expected?

When he finally emerges to a roar from the crowd, he does so in a bright white shirt that I’d imagine will seldom see the use of the majority of its buttons on a backdrop of bright lights and historic photographs. He takes to the mic and says “I am very proud to be here”. A photo of Elvis Presley is projected onto the wall as Morrissey opens with a cover. 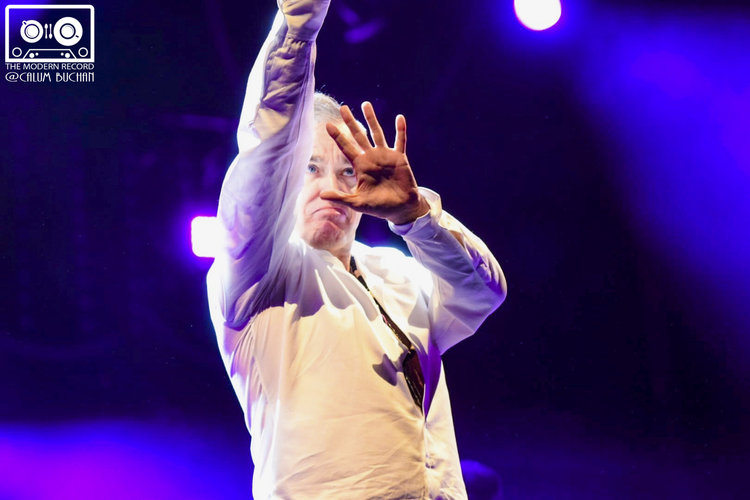 Smiths classic I Started Something I Couldn’t Finish is thrown in early in a set that relies heavily on new material. The song from the Strangeways, Here We Come album has famously only been given a life on the live stage in recent months. The crowd shows their appreciation for this privilege as Morrissey struts around the stage whipping the microphone wire every time he lets loose his iconic growl.

The words “I’m the sun and the air” echoes around the arena and send the crowd into euphoria. Does Morrissey sing an emphatic version of How Soon Is Now? with as much vocal prowess and stage presence as ever before. The 7 minutes long performance comes to a climax with Morrissey leaned over on the stage whilst the drummer hits a gong. Glasgow also shows love for his solo music as he returns to his now 30-year old debut solo single, Suedehead. 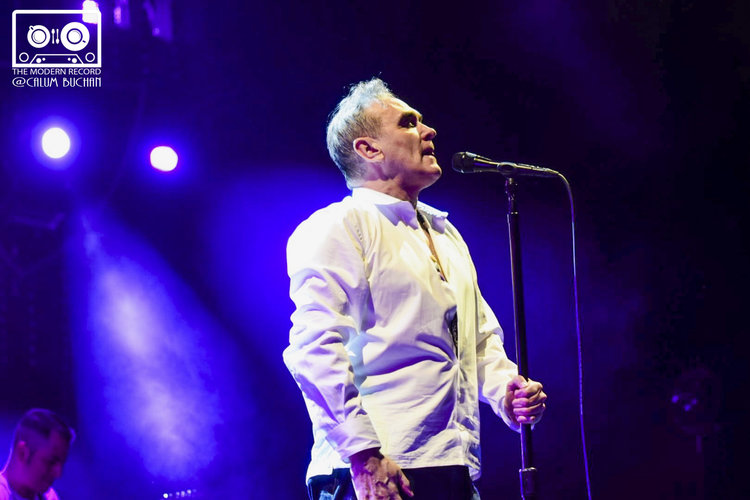 His swagger injects life into the 22-song set as he sings Jackie’s Only Happy When She’s Up on the Stage, which the crowd reacts to positively despite the new album maybe not being as loved as previous records. There is a strange dissonance as he performs a series of solo songs with Smiths’ artwork in the background. The riff of Low In High School plays with Meat Is Murder artwork projected in the background. Maybe it shows how brilliant Morrissey can still be without relying on Smiths’ material.

In typical Morrissey fashion, he asks the crowd the question, “I’m curious, do you actually like Nicola Sturgeon?” There is a chaotic mixture of boos and cheers as he follows it up with “Those hands would be in anyone’s pockets”. There is a divide in the crowd and it has hard to see what Morrissey is trying to achieve here, maybe it is just that – chaos.

The heartfelt and melodic Every Day is Like Sunday, which the Glasgow crowd sing word for word, acts as a perfect introduction to the lively and energetic Irish Blood, English heart which concludes the show and sees the 58-year-old rip his short off and throws into the crowd. The notoriously polarising figure is strangely brilliant at bringing a crowd together.