Bright Light Bright Light were the opening act at the much-awaited Erasure concert at the Caird Hall on Friday.

The singer Rod Thomas who hails from the Welsh valleys was accompanied by a drummer and keyboard player. They came on to a good response from the Dundee crowd and built up an immediate rapport with the crowd, who was donned in feather boas and glitter cowboy hats.

They are not new to gigging, previously supporting Ellie Goulding, Scissor Sisters, and now Erasure to add to an impressive CV.

Rod has a big personality that screams entertainer and has a big voice to match. It’s a voice that would be at home on the big stage in the West End or belting out the Welsh national anthem at the Millennium stadium.

He belted out some strong vocals to his electro, house music set which went down well with everyone in the crowd. The Dundee crowd was ready for a big night and Erasure really did their homework picking this outfit, who warmed the packed house up well.

Keep an eye out for them as they have a big future and a niche sound that appeals to a decent loyal fanbase.

Erasure came on shortly after and the place just went mental. Having done a few gigs including the Happy Mondays and Placebo at the Caird Hall, I’ve seen some seriously loyal fans, but Erasure’s fans are truly on a different level.

They came to the party and went into overdrive when Andy and Vince came on. Andy did really well to just turn up after a bout of flu, but as a true professional he made sure the show went on and then some with a very generous setlist.

Starting seated, with Tales of the Unexpected, he launched straight into Mad as We Are and onto their classic Ship of Fools.

The crowd was up on their feet from the first minute and soon the aisles started filling up with people letting their hair down and just having the best time. Dancing with strangers, hugs, selfies were all happening and the gig had just started.

Oh What a World, then Breathe were followed quickly by Just a little love. The crowd was on their feet again and more and more people were jumping up and down in the aisles. A brilliant vibe was evident all over the hall and as the crowd got louder, the vibe just kept picking up intensity. 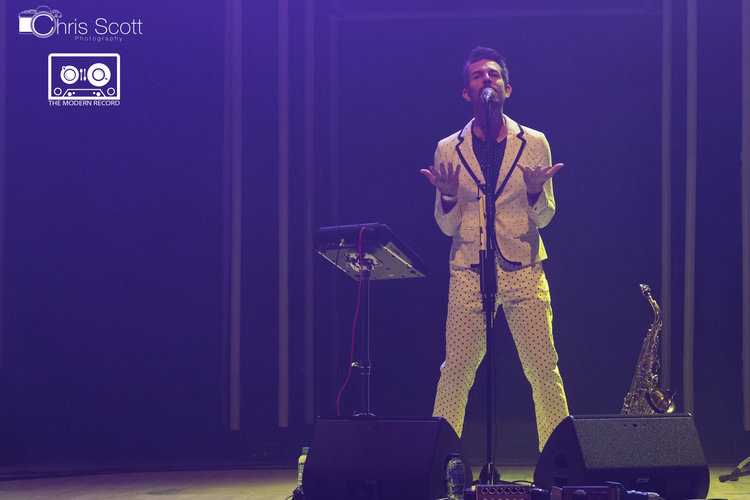 Andy really appreciated the crowd, stopping for chats in-between songs for selfies and to personally meet his fans, which I thought was great to see.

In my Arms followed by Oh L Amour, then Chains of Love sent the crowd wild. These classic 80’s tunes didn’t seem old or weathered. Andy’s performance was on point. His 2 backing singers were brilliant and they all moved and sang in total sync, while an unassuming Vince was just brilliantly doing his thing above the stage.

Sacred was next, Sweet Summer Loving, and I love Saturday was followed by the classic Victim of Love, that again vocally was on point. Taking into consideration Andy was suffering, he just marched right through his vocals.

After a wee medicinal whiskey, Phantom of the Bride and World Be Gone was next, followed by Take me of Myself. By this time, we were constantly standing as no-one in the house was sitting. 2000 people on their feet, which was pretty epic to see.

Who Needs Love like that, Blue Savannah was next, 2 epic tunes from the Erasure catalog were belted out in true Erasure style. Drama quickly followed (the song of course)

Knocking was next followed by Stop a clear crowd favorite. A couple more of the crowd handed Andy some of God’s nectar and he was def feeling the crowd after his couple of whiskeys.

Here I go Impossible again, Always, A Lousy Sum of Nothing was rapidly followed by Sometimes and the last tune of the night A Little Respect, was the final tune which just sent the crowd into the clouds.

All in all a fantastic night of music, memories, a joining of people, gay-straight, it didn’t matter. Everyone there was as one and it really was a 5/5 performance.