Opening the show tonight are the wonderful 4 piece Yonaka. Heralding from down South in Brighton, their brand of dark alt pop is a great way to kick things off.

The energy from the members is another level, especially guitarist George Edwards who is in a constant state of frenzy throughout the set.

Frontwoman Theresa Jarvis struts about like she owns the stage, and rightly so as they seem to be getting everyone in the venue on board with their sound.

The highlight of their set comes in their new single “F**king With The Boss” which is due to be released soon, and is an absolute anthem.

Don’t forget the name, going by tonight’s performance this is going to be Yonaka’s year! 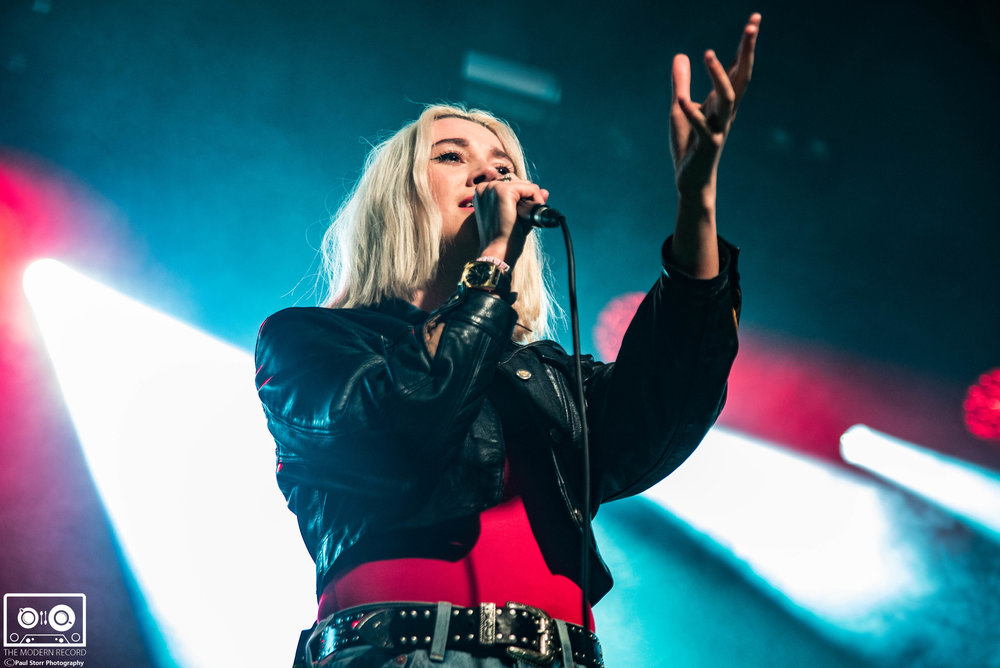 Main support tonight comes from Man With A Mission. All the way from Japan, the band take to the stage with each member wearing a wolf type head on them. You can tell by the audience’s reaction that this has taken some by surprise, although there are members of the crowd who are evidently here to see them and go wild as soon as they start their set.

Their songs are sung mainly in English, with some Japanese parts thrown in which throw back to where they’re from. The amazing “Dive” is a perfect example of this.

We get a blistering run through of “Dead End In Tokyo” which sounds massive in the Barrowlands and a cover of Nirvana’s “Smells Like Teen Spirit” which the band put their own twist to.

Overall they produce a thoroughly enjoyable set and are worth checking out if you get the chance to.

The night’s headliners Don Broco appear on stage and the energy in the Barrowlands hits another level.

The triple hitter of “Pretty”, “Everybody” (both from this years newly released “Technology” album) and “What You Do To Me” (from 2015’s “Automatic”) to start things off is insane, and following these with “Fire” (also from “Automatic”) makes sure that energy levels aren’t going to drop anytime soon.

“Who here knows what a circle pit is?” asks frontman Rob Damiani, receiving a massive cheer from the crowd and the formation of a giant pit before the band kick into another new tune, “Stay Ignorant”.

A fan throws a Hawaiian shirt onstage which Rob puts on, to discover it has the DB logo on the back of it. He proceeds to wear this for the majority of the rest of the set, with the fan joking that they’re onsale online now for £29.99

One of the major highlights of the evening comes when things are thrown back to 2012 and the band smash out “Priorities” from their debut album of the same name, and the whole room jumps along in unison.

We get the set staple of “Thug Workout” (a cult Don Broco fan hit which was released way back in 2008) which includes the formation of a giant circle in the crowd for the breakdown, so that fans can drop and do push ups which has become a recurring theme at Don Broco shows for this song (we also get one fan performing a backflip, much to everyone’s enjoyment). With tonight’s show being in Glasgow we also see the return of the ‘Bad Boys Badminton Club’ which was initially started at a gig at the ABC back in 2013. The crowd splits in two and a badminton net is brought out, with members of Yonaka and Man With A Mission competing to set a new show record, which happens when they manage to get a run of two shuttlecocks back and forth over the net.

The main set is finished with “Money Power Fame” (also from “Automatic)  but it’s not long before the band are back out for an encore of newbies “Come Out To LA” and “T-Shirt Song” to round off the evening.

Don Broco shows are full of more energy now than they ever have been, so make sure you catch them if you can!