BOWLING FOR SOUP START THE “GET HAPPY” TOUR IN GLASGOW 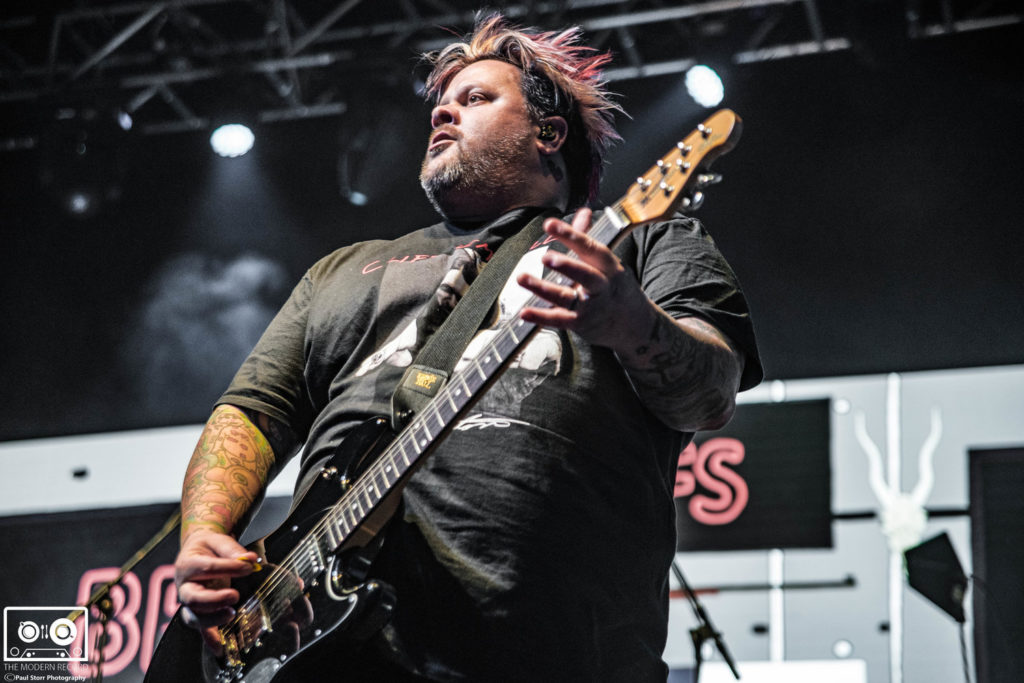 California’s finest, Army Of Freshmen, open tonight’s show, and we couldn’t think of anyone better to take this place. Bounding out onto the stage they are full of energy, with frontman Chris Jay not staying on the one spot for more than a second. This energy takes over the ever filling venue and challenges anyone who enters not to bounce along with them.

With tonight being the “Get Happy” tour (Army Of Freshmen also appeared on the same tour here in 2007) these guys are the sheer definition of happiness when watching them. Each member plays with a huge smile on their face and you can tell they’re having the time of their lives.

Standouts of their set come in old fan favorites “10,000 years” and set closer “Juliet” which has the now near full venue bouncing along with the band.

Hopefully they’ll be back for their own headline tour soon and when they are, don’t miss them!

We caught up with Chris Jay after the show for an interview, which can be found 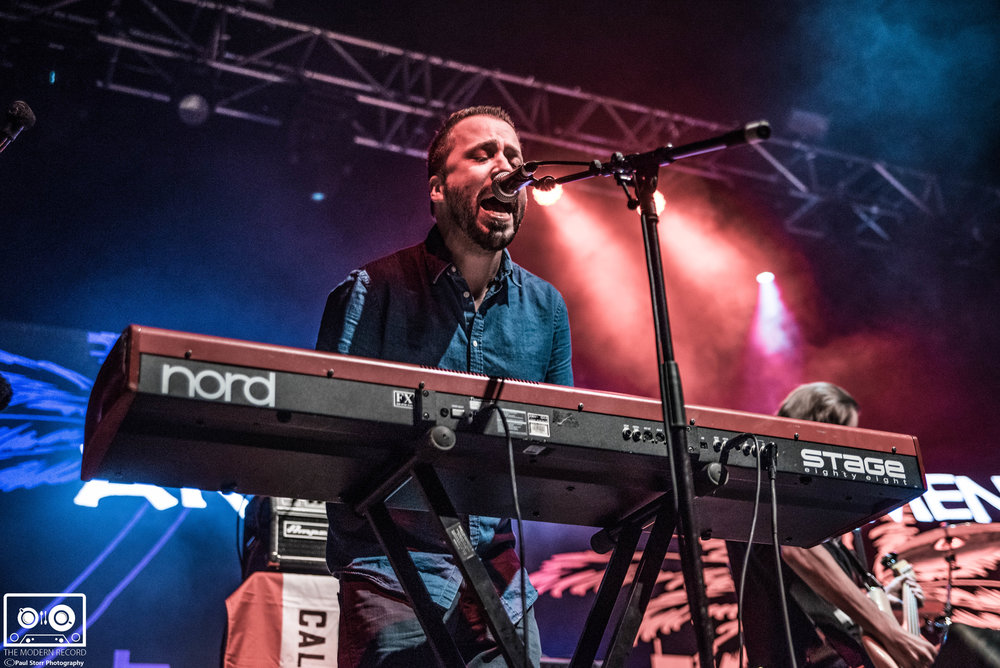 Up next are Orange County’s The Aquabats. By far the most unique band on the bill, they take to the stage clad in skin tight superhero costumes and kick into their set.

With a generally rocky sound to them, their songs are very tongue in cheek. We get a tune about a two headed cat, “Cat With 2 Heads!”, which stands out as one of the catchiest of the evening.

Frontman The MC Bat Commander mentions how he’s heard that Scotland has the rowdiest crowd, even “fight a shark” rowdy, as the band then play “The Shark Fighter!” which comes complete with giant inflatable sharks being thrown out into the audience.

“Look At Me, (I’m A Winner)!” sees The MC Bat Commander leaping down into the photo pit to shine a torch on guitarist Eagle ‘Bones’ Falconhawk’s solo, which adds to the hilarity of their set.

What could possibly make the set even whackier? Well the day of the gig being national pizza day saw the band play the amazingly catchy “Pizza Day!”, this time with giant inflatable pizza slices being thrown out.

The bands crowd interaction is great throughout the set, with them getting everyone on the top balconies to dance, threatening a riot if they don’t. Further hilarity then ensues when they are interrupted by a character from outer space complaining they can hear their “awful music” and it is interrupting their sleep, and the worst villain of all “the party pooper” who brings the news that the set only has five minutes remaining.

They finish off with “Pool Party!” with giant inflatable beach balls making their appearance to round things off.

The Aquabats are a great watch, and an amazing fit for this package tour. 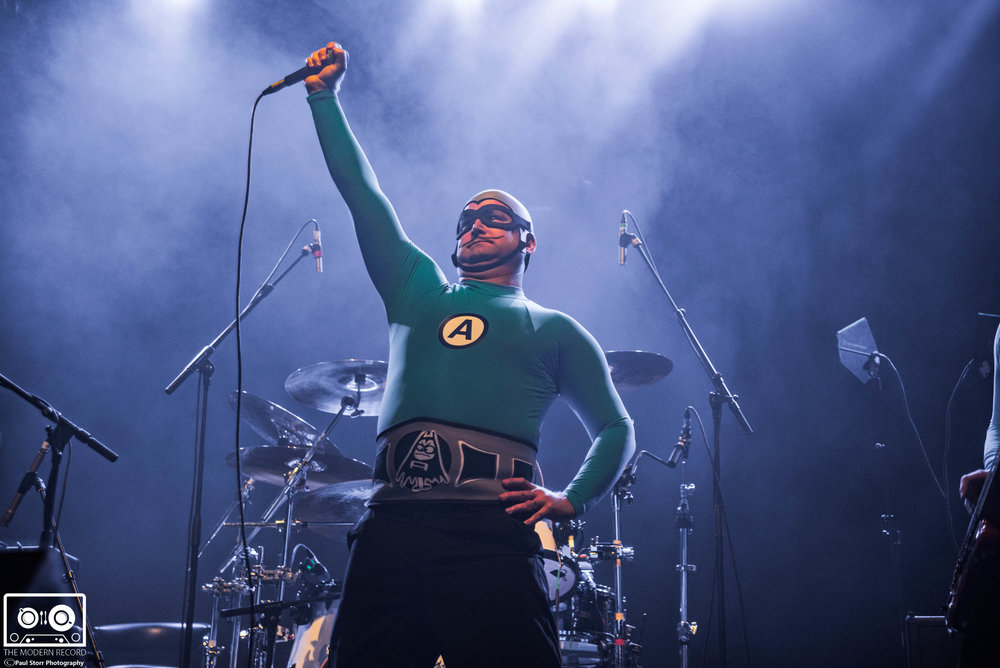 The night’s headliners Bowling For Soup take to the stage and immediately launch into “The Last Rock Show” which gets the venue roaring and jumping along.

These shows have been billed as the band playing their phenomenal album “Drunk Enough To Dance” in full and they do it in such a way that they don’t play it in order, but mix it in with other classic hits to make up their set.

We get the usual onstage banter between the band and the audience, with frontman Jaret Reddick telling how they also have Kerrang! magazine along to review the show tonight, so with it being the first night of the tour if anything goes wrong, the crowd should just pretend that it’s all part of the show so they can earn the highly coveted, and very rare, 5K review!

“Bet you didn’t think you’d hear this so early on!” screams Jaret as they then hit out with a superb run through of their smash hit “Girl All The Bad Guys Want”, which sees guitarist Chris Burney managing to blow out his amp from ‘rocking so hard’ but of course, this was all part of the show (as far as K! should be concerned)

The tremendously catchy “Almost” is a highlight of the set, with the crowd singing so loud at times that they drown out the band.

An overly eager audience member climbs onto her friends shoulders and flashes her breasts at the stage, prompting Jaret to remark “we haven’t been flashed boobies in a long time, it’s like we’re Guns N Roses but we started on time!” which gets a massive laugh from the crowd.

“Drunk Enough To Dance” token ballad “Where To Begin” is prefixed with Jaret telling us that the song is about the boyband One Direction, which is met with a chorus of boo’s. He then rightly tells the audience not to boo One Direction, as they could buy us all…which in reality is very true.

“Punk Rock 101” has the usual middle section stop start which gives the audience their ‘Bowling For Soup musically enhanced photo opportunity’, this serves as a perfect reminder of how tight the band are live as once the banter stops and they kick back into the song they don’t miss a note.

Again hitting on the fact that K! are here tonight, Jaret mentions how only Iron Maiden get 5K reviews and plays the intro to the song “Wasted Years” which is met by rapturous applause.

The main set is finished with “Greatest Day” before the band re appear for an encore of “Today Is Gonna Be A Great Day” (famously used as the theme song for the cartoon Phineas and Ferb), “(Is The World) Falling Apart”, “Star Song” and then of course the superb “1985”.

Bowling For Soup are as much fun live now as they ever have been, and with The Aquabats and Army Of Freshmen also on this tour, you’d be crazy to miss it!

THE MODERN RECORD: INTERVIEW WITH ‘ARMY OF FRESHMEN – CHRIS JAY’