EMBRACE GO THROUGH THEIR BRIT-POP GEARS IN NOSTALGIC PERFORMANCE AT O2 ACADEMY, GLASGOW 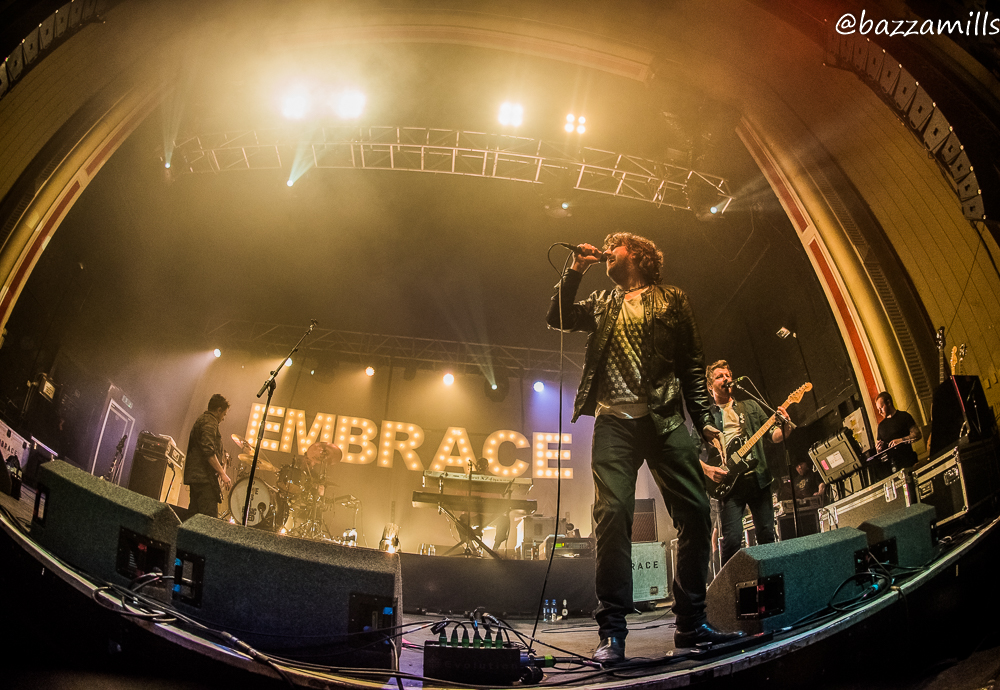 Traffic hampering us enroute to the O2 Academy means we get in to find opening act Kerri Watt already on stage chatting to the early arrivals in between her original songs, which have a great rhythm and suit her lovely voice. She hints that we will see her later, which can only mean she is joining Embrace for the track ‘Never’ later in the show.

The next act to take the stage is Eevah, led by singer Nicole Hope Smith and accompanied by none other than the guitarist out of Embrace: Richard McNamara. He is playing some sparse guitar lines and operating some electronics and sequences. It’s not the most inspired support line up and I’m not sure it really got the punters in the mood, but the overall quality was good. 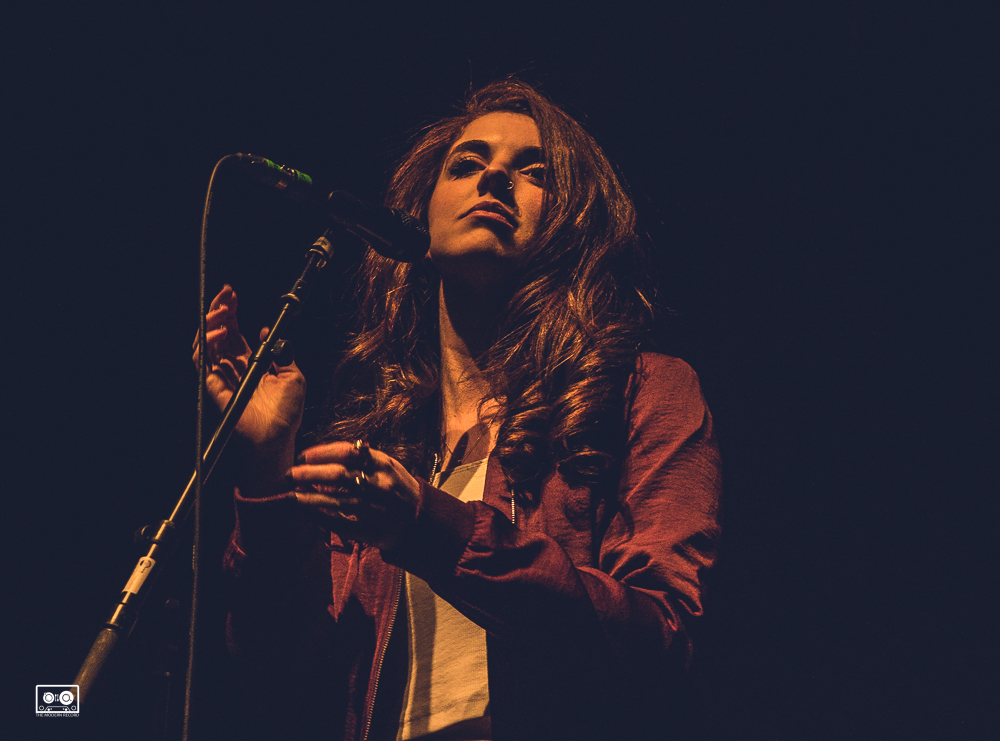 Embrace take the stage to what feels like a near capacity audience with a rapturous reception: they do have a loyal fan base in Glasgow it seems. They open with a track from the new album, ‘Wake Up Call’ and then surprisingly into one of the candidates for show closer ‘All You Good Good People’. The crowd love this track, with lots of singing along and hands in the air.

‘Nature’s Law’ and ‘Follow You Home’ flow quite naturally into ‘Come Back To What You Know’ which again feels like it’s played too early in the set despite getting a huge reaction. This is then followed by ‘Rabbit Hole’ – again this is a new one and there is a definite disparity in crowd reaction to the newer stuff, but I suppose that’s to be expected with the new album only out a few weeks. Danny McNamara’s vocal work is a little shaky through this one. 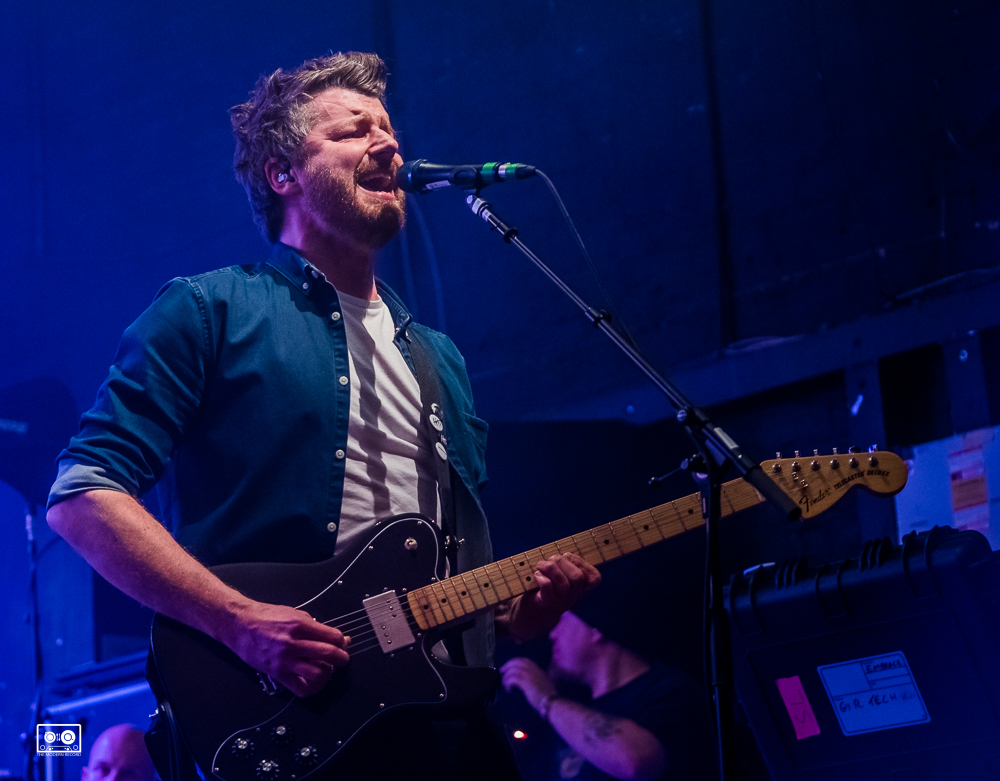 They follow up with another new album track ‘Where You Sleeping’ with McNamara going off stage and leaving his brother Richard McNamara to vocal duties for this emotive track, with a definite sense of longing in the vocal melody. He also does the singing for ‘Refugees’ and the sound has been pretty decent all night but Richard’s lead vocal and his backing are lost in the mix and it is really apparent here when he is covering the lead work.

There’s a guitar change at this point, from the Custom black Telecaster to a bright red ES 335, beautiful guitar! This is then used to play ‘Someday’ from their Out Of Nothing album. ‘One Big Family’ is the next track and it has a real Black Crowes feel to it, more bluesy and the crowd are singing along. This takes us into the title track from the new album Love Is A Basic Need which has an anthemic feel. From here they close out with three tracks which have the middle-aged revellers in fine voice and really animated. ‘Save Me’ into the Chris Martin penned ‘Gravity’….a quick change back to the Custom Telecaster to close the main set with ‘Ashes’.

They get chanted back to the stage by the Glasgow fans and play a four song encore including a couple of tracks from the new album. ‘All That Remains’ starts it off, then ‘Protection’ from the more electronic-based album Embrace, before Kerri Watt is then invited back to the stage and give her delightful vocal to ‘Never’. The night is closed with ‘The Good Will Out’ and the reaction is stupendous. Embrace take a bow and look like they have enjoyed what was a good night in Glasgow as it seems the crowd have too.

If all gigs were just about crowd reaction then this was a masterclass: the fans were really loving the old stuff mainly but there was a sense that the new stuff has mileage. The performance suffered slightly for me in that Danny McNamara does not come across as a natural frontman. He seems to be very awkward in the position and ill-at-ease with on stage banter and crowd engagement. I found that surprising given the bands level of success and longevity (20 odd years in the business).

This was a good gig and if you like the Embrace brand of song writing it is worth seeing them as its all done very well. Danny McNamara’s stage craft needs work but all in all the night was good.