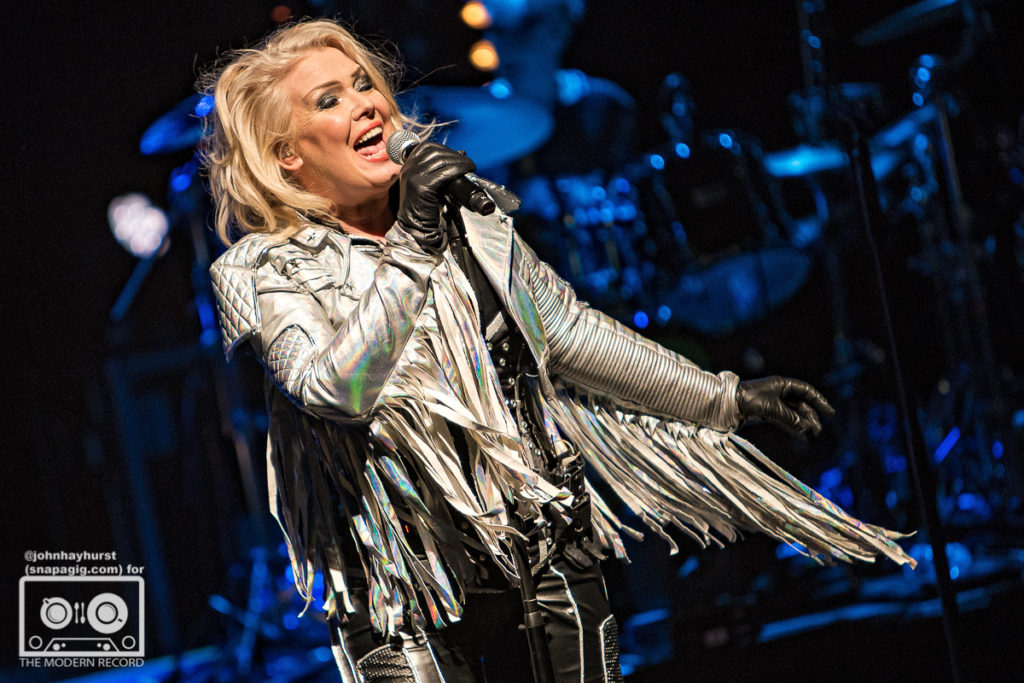 The provincial City of York doesn’t always get included on established UK Tours, but recently we have seen an increased quality of acts at The Barbican. Tonight is a great example – Kim Wilde, most famous for hits over 35 years ago, particularly the timeless ‘Kids in America’. At that time she was a fresh-faced teen trying to prize herself from the shadow of being Marty Wilde’s daughter, which was a little difficult as he wrote most of her early hits.

Tonight we witnessed a comeback of some surprising proportions. No longer resigned to the Rewind 80’s Hits Festival circuit, Wilde – now aged 57 and wearing very well – is still able to sell a brand-new album Here Come The Alien,  and show that she can still rock out with her dedicated fanbase.

Kim Wilde emerged from the side of the stage wearing what initially resembled a suit from the film Tron, but on closer inspection it was a full body suit shaped like a black leather covered basque, studs and sparkles with high heeled boots to match. On top of this she had a cream and sparkly jacket with the kind of arm tassles Roger Daltrey or Ozzy Osbourne used to sport. It’s a jaw dropping combo and it turns out is her only outfit on this tour – “It’s showing wear and tear, I had to clean it in the bath last night and bits are dropping off, just look away if anything splits”.

This is very much a family affair as her brother Ricky Wilde is on guitar duties, and his daughter (Kim’s niece) Scarlett Wilde is her backing singer. Scarlett provides some much-needed energy in the early stages of the show, constantly bouncing all over the place whilst Kim struts slowly along the stage, not straying too far from the electric fan which provides some essential cooling and hair blowing facilities. It must have been hot in that suit. 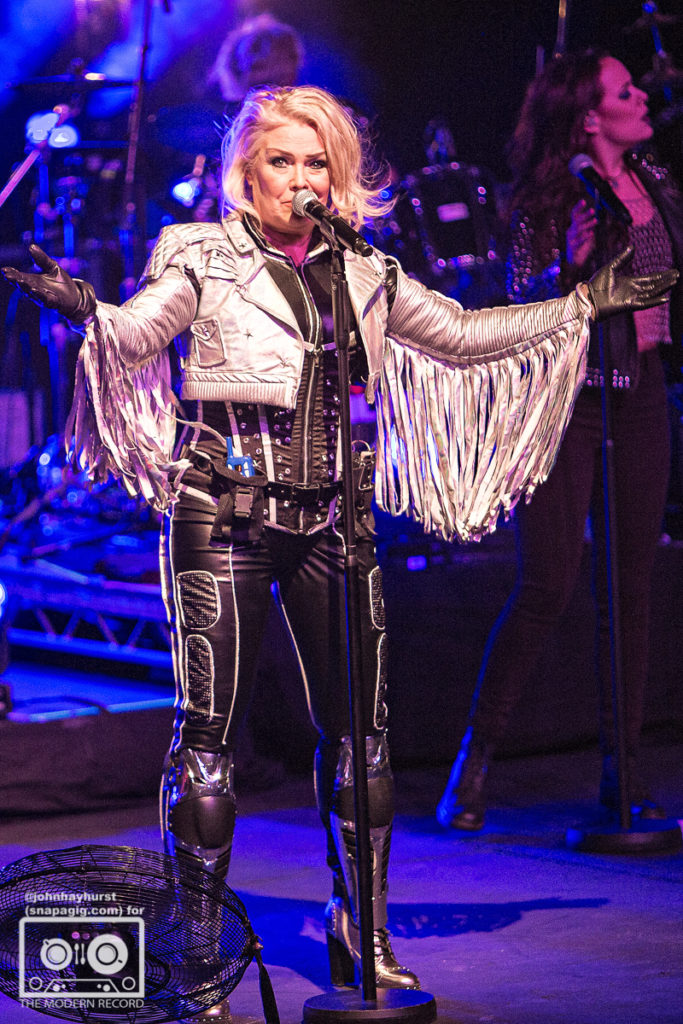 It is clear from the off that this is a rock show: twin lead guitars, two drummers, bass and an impresario on synths in the centre. The new tracks are booming live – ‘Kandy Krush’ and ‘1969’ stand out from the rest and when they are interspersed with hits like ‘Water on Glass’ and ‘Cambodia’ the breadth of Kim Wilde’s range is realised. Even more notably the voice is in great shape and whilst other peers from the eighties are reliant on Auto-Tune, Wilde quite obviously tonight needed no such enhancement. Her cover of the Bee Gees penned ‘If I Can’t Have You’ was a stunning interlude, starting slowly with only an acoustic guitar backing and building into some audience participation by the chorus.

The only peculiar moment of the night came when she decided to run a quite camp version of ‘Another Step (Closer To You)’, made popular by her duet with Junior Giscombe. Tonight her and Scarlett tried some holding hands moves, which doesn’t quite work in the same way and it feels a little false and flat. Thankfully ‘Words Fell Down’ saved the day with a quite punky attitude and lots of blonde hair swishing from side to side.

The difficult thing with all seated audiences, when should you get up out of your seat and let your hair down? Worried that Mavis and Doris behind you will complain about you being in the way? Well that moment came when ‘View from a Bridge’ opened and a handful of people started to get up, slowly but surely, we had 60% on their feet by the end of the track. When ‘Chequered Love’ started the remaining few were there, and the party could finally begin, with much more animation from Kim and Scarlett as they went off the Richter scale running around the back of the stage to the drummers. Even a keyboard guitar came out and the now 4 guitarists start doing a ZZ Top/Status Quo side to side rock n roll dance.

Next after an emotional thank you to the audience from Kim for attending this evening, ‘You Came’ was belted out across the Barbican crowd. I’d forgotten what a great pop song this is, and this live version had extra bombast from guitar and synths. Ricky Wilde in his mirrored shades provided extra backing vocals, and the whole track was the most unexpected surprise of the night.

‘You Keep Me Hanging On’ is another great dance tune, the temporary seating in the front is visibly swaying to the beat. The set ends with a rocking guitar-led rendition of ‘1969’, her homage to the moon landing and believed UFO sighting in 2007.  Complete with roadies dressed in alien masks at the back, I believe we were supposed to shout “It’s behind you!” if we saw an alien, but panto season is over and this is all way too good for that kind of cheese.

The encore started with the latest single ‘Pop Don’t Stop’, which didn’t look out of place at all. And then of course it’s time for ‘Kids in America’, her signature tune. It will always be that, and yet there are plenty of other great songs in Kim, Ricky and Marty’s back catalogue.

Who’d have thought? Kim Wilde in her late fifties is back and selling out concerts, and the Pop Don’t Stop with her.