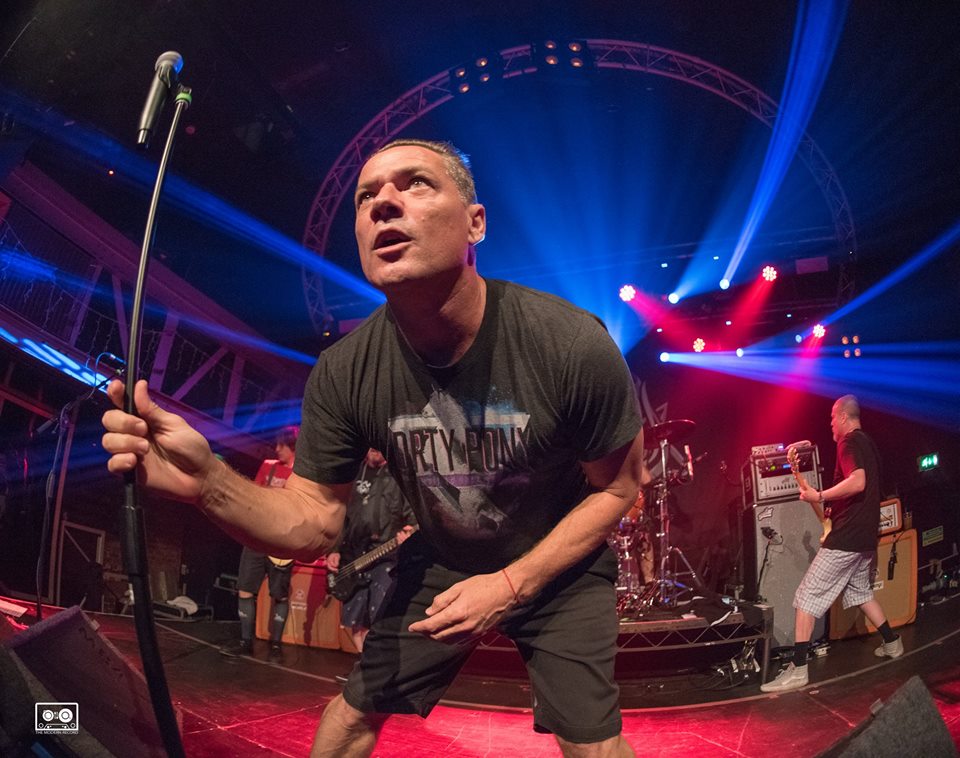 Ugly Kid Joe are a real blast from my past: my introduction to them was in the music used for one of my favourite films Wayne’s World, so really was looking forward to a night of hard rock ahead. I get into The Garage and the band onstage look familiar – but not – at the same time. Then it hits me: this is Yellow Cake, Ugly Kid Joe front man Whitfield Crane’s side project.

They are a pretty interesting mix of looks, from their Asian bass player in tartan skinny fit jeans with a strange little sporran hanging down at the back, to the bearded guitarist playing a left handed flying V guitar with a Bigsby tremolo and strung right handed; it was very unusual. These guys play a good hard rock set and are very entertaining to watch, lots of energy on show and the sound is good. 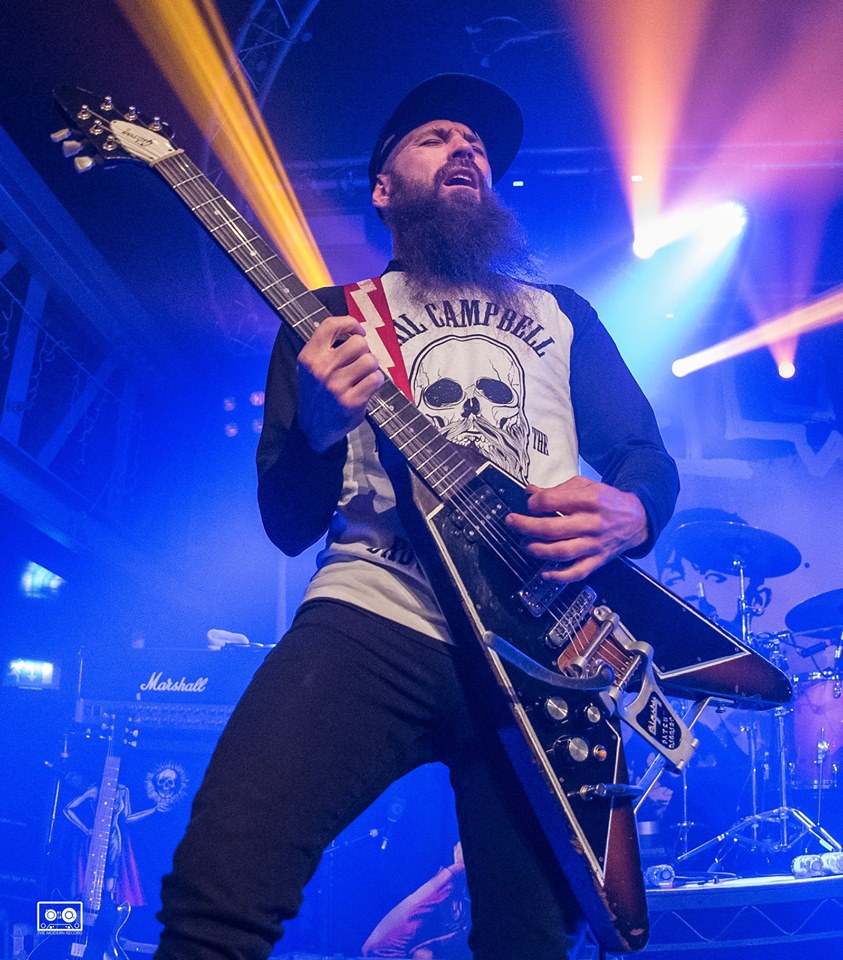 Next up after a super quick turnaround, is ex-Motorhead guitarist Phil Campbell and his band:  The Bastard Sons. This is not just a clever name – three of the other four folks on stage with Phil are his sons, great way to keep your progeny in paid work.

Phil looks very much like a cross between Don Johnson and Al Pacino with his goatee beard, shades and hat. The rest of the band are in a uniform of dark denim waistcoats and black tee-shirts. There is copious amounts of gratuitous swearing and they love to encourage the crowd to give them the middle finger presumably so they can oblige in return.

A very fun set with some great hard rock tracks and a dynamo of a frontman delivering them, there was plenty of on stage camaraderie on show.  Particularly in getting the crowd involved to lambast the bass player (Campbell’s 3rd born) with the chant ‘Fuck You Tyler Campbell’. Finishing their set with the Motörhead classic ‘Ace Of Spades’, there is nothing left to say afterwards. 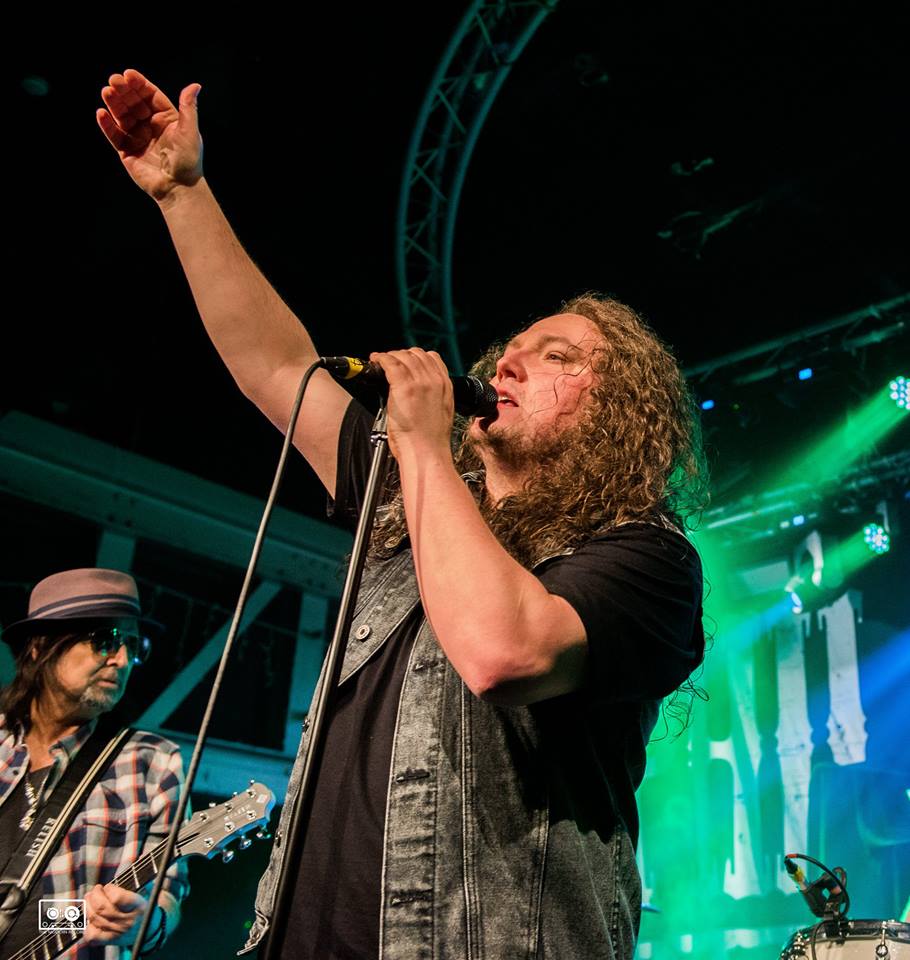 Whitfield Crane and company came on stage at last and immediately power into some dynamite hard rock with the classic ‘Neighbour’.  Throughout the set the guitarists play some blistering licks, with one delivering a more blues based hard rock style and the other able to fly through a bit of shred. The bass player looks bit out of place, resembling a Ron Perlman dressed up as Vanilla Ice, but he plays and sings well though.

‘C.U.S.T ‘and ‘Panhandlin’ Prince’ are followed by ‘Come Tomorrow’ and ‘No One Survives’. By this point in the night the older but energetic crowd has gotten right into it: a girl close by decides she is going to crowd surf to the front with the crowd not really dense enough, but she makes it. This display has emboldened another fan although he is a much larger dude, and I’m sure his transit from crowd to stage involved some floor time too….

Crane’s demeanour on stage throughout the evening was one of a confident frontman. There is very little chat between songs but Crane has an easy and very natural rapport with the room, he exudes a confidence which really underpins the performance. He made the crowd sing in the choruses, and during the songs his vocal was exactly as I remember it from the originals. The one thing that was a bit disgusting was his tendency to spit on the stage every couple of minutes, perhaps I’m showing my age here but I was real uncomfortable with that……no need.

‘Devil’s Paradise’ and ‘So Damn Cool’ gave way to a cover of Harry Chaplin’s ‘Cat’s In The Cradle’ which was the follow up to their breakout success. After this, Crane asks the Glasgow crowd if they want something special and different just for Glasgow – the obvious response was yes. They do a broken down version of ‘Cloudy Skies’ which follows right into ‘I’m Alright’ and ‘Milkman’s Son’.

‘Mr. Recordman’ is sung by supposedly bashful guitarist and Crane’s best friend Klaus Eichstadt, ‘Busy Bee’ follows this with Crane is back on vocals. These songs get a raucous response and more crowd surfing from the same two people from earlier in the night, I feel pity for the folks near the barrier who have to endure this. Crane obviously does too as he takes the time to dedicate a song to the couple who have been constantly bashed (Linda & Gary….I think).

Before starting ‘Goddamn Devil’, Crane tells us that they don’t do encores and that from here the reaction will determine whether we get one, two or three more tracks. Needless to say there was a great roar at the end of the song and Glasgow was getting three. This turned out to be ‘V.I.P’, ‘Funky Fresh Country Club’ and then, from Wayne’s World, the track that broke them: ‘Everything About You’.

This was a fun and entertaining night from start to finish. Yellow Cake and Phil Campbell & The Bastard Son put on a decent performance and Ugly Kid Joe were better than expected. They had lost none of the bravado and rock attitude but combined this with a trademark humour. After all these years – 25 to be precise since the release of America’s Least Wanted – they are still worth seeing.