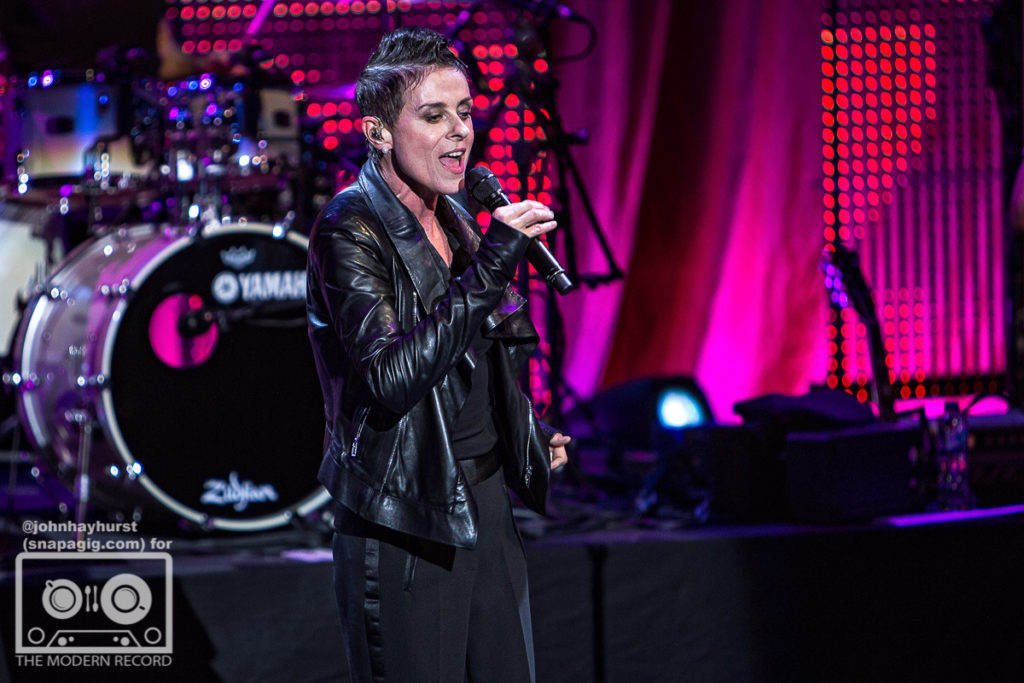 Authentic British soul music is a tough nut to crack and if you’re a white Northern girl probably even harder, unless you were strongly affiliated to the clubs of the Northern Soul scene in the 60’s and 70’s. Lisa Stansfield grew up on a diet of Diana Ross, Marvin Gaye and Barry White whilst living in Rochdale, and has mastered the art of soul and rhythm & blues music to become the biggest British female star of the nineties. Tonight in York she showcased her new album Deeper, while finding time to serenade a newly engaged couple and perform her signature hits to a sold-out crowd.

After hearing Israeli singer-songwriter Irit Dekel perform her jazzy Latin sounding folk music tunes to a respectful seated audience, it was time for the Lisa Stansfield Band to play a short intro. This is a generous backing band with two keyboard players, guitars, drums and a great brass section. Andrea Grant – a stunning vocalist in her own right (BBC Strictly Come Dancing Band) – is on backing vocals on this tour.

Lisa Stansfield emerges from the side of stage with a huge grin on her face and open arms as if to give this audience a massive warm embrace. She is wearing all black tonight, a leather jacket hides a black skinny vest and she has baggy trousers and shiny boots to match, hair is short and in that tight upwards clipped curl. ‘Everything’ opened the show as it does on her new album Deeper. On the album, it sounds like it stepped out of an 80/90’s record with electro drum beats peppered throughout – however, live this is a different animal; punctuated with staunchy brass notes from Mick Donnelly and Johnny Thirkell. It is a strong opener – shame everyone seems rooted in their seats. 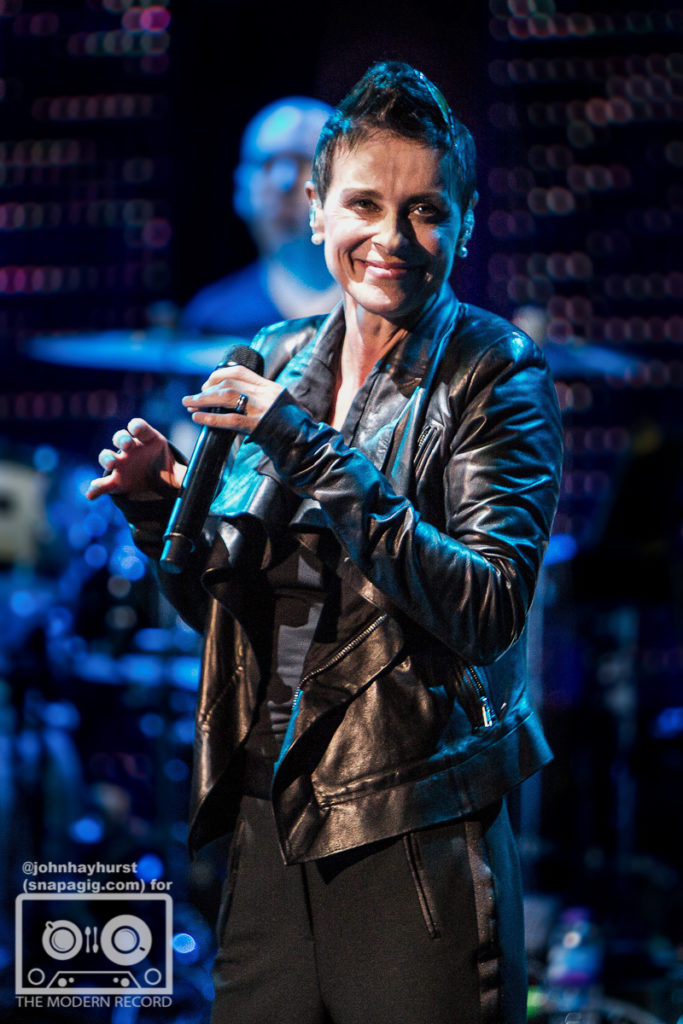 “Tonight, there are no rules, do whatever you like, don’t listen to anyone telling you what you should do” Stansfield announces in her warm deep North West twang. Indicating that the audience are not allowed to dance, but she wants them to! It’s going to take a while before that happens.

After the slow title track ‘Deeper’ we venture into her cover of Barry White’s ‘Never, Never Gonna Give You Up’ and here is where she shows her sultry soul side. It’s a classic with Stansfield’s vocals going deeper than ever to make the hairs on the back of your neck start to prickle. 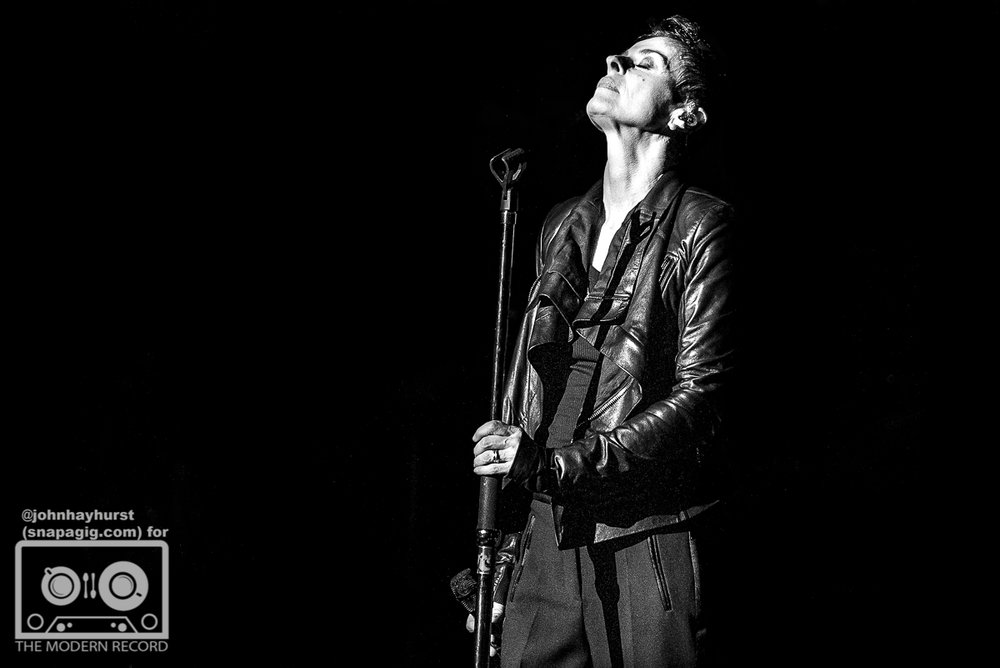 After the first three songs the mood changes, and the jacket comes off quite theatrically being thrown behind her, she starts to stomp and march around the room. Then an announcement “Will Paul please stand up?” Expecting half the room to be full of Pauls, one brave fellow stands up in the seats and proposes to his girlfriend who eagerly (and perhaps fortunately!) accepted. Dedicating the next song to them Lisa Stansfield sings an emotional ‘Hole In My Heart’, it is breathtaking and shows her full range, and afterwards she jokes by saying “Is it still a yes Paul?”

‘Change’ is the first time we get a handful of seated folks to stand up and dance, it is short lived as they then run through a short acoustic version of ‘So Natural’. Stand out track of the night was ‘All Woman’ which lyrically holds its own amongst any great soul song, a bittersweet tale of about everyday long-term relationships. It’s a good job she didn’t dedicate that one to Paul!

The dancing starts again as the Coldcut track ‘People Hold On’ roars from this fantastic band and keyboard and brass solos are a plenty. Current radio played ‘Billionaire’ followed, and then she announces to everyone that “This part is serious!” before saying “I can’t find my baby”, and with that everyone is on their feet for ‘All Around The World’. It is a shame that it takes her biggest hit to get everyone on their feet, but we are all getting a little older perhaps and have to reserve the energy for certain key moments.

It was noticeable that some crazy people left the show thinking that was it! But the encore delivered a gorgeous version of the Candi Statton track ‘Young Hearts Run Free’, for those that waited received their reward: some superb sax-playing courtesy of Mick Donnelly, accompanying Stansfield’s dancing and northern soul. Tonight was a celebration of a great British soul singer authentic in every element. The new cuts matching the old and hopefully many more years of gigs to come.