AT THE FINAL DATE OF THEIR TOUR, OXFORD TRIO TTNG SHOW US HOW THUNDEROUS INDIE CAN BE 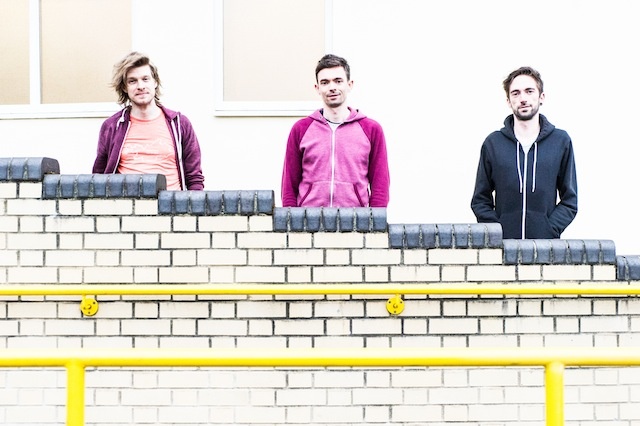 If tonight’s show was a masquerade, the theme of the ball would be “90’s thrift store”. In my tight jeans and leather shoes I feel glaringly overdressed, but little do I care as we all know that by the end of the night all socks in the room will be knocked off, along with every other tweed, distressed, and baggy article of clothing.

With a name fit for a character in a comic book, Steve Strong climbs onto the stage. His super power? He’s a one man army. Breaking the ice with an airy, resounding guitar, he begins to carefully stack layers upon layers of instrumentation, injecting his loops with bass lines, four on the floor, and a number of samples. Strong’s tangled drumming is definitely the driving force behind his style, steering the pieces through monumental build-ups and catastrophic releases. By the third song the formula becomes evident, and the limitations of the setup can be felt. Adding an extra ounce of crowd interaction to the mix would have made the set feel a lot less stagnant but, all things considered, Strong’s performance provided an enthusiastic ignition to the night’s engine.

Next up are Chiyoda Ku, a locally grown instrumental trio that, skipping all pleasantry, dives straight into an all meat no faff set. The band shows some alchemy, their stares somewhat awkwardly roam the stage never landing on one another, but the music tells another story.

The engulfing bass is tightly interlocked with a drum-set stripped to its essentials, leaping from odd-metered, desertic grooves to slow, foggy sections that are quite familiar sounding to Bristol’s trip-hop aficionados. The combo’s determination to not be put in a box is evident, and I can only surrender to the ever-changing sonic landscapes that flash before me. The guitar parts are a succession of stabbing cleans and crushing dirts, dressed with a tasteful array of quirky voicings, glitches, and ethereal moments. The incessant variety makes the performance slightly unfocused, and a few pairs of eyes in the audience can be seen tuning out. Again there’s a lack of a fronting presence and, despite the quality of the music, a wall can be felt between stage and spectators, as if we were witnessing a showcase of bedroom projects.

Luckily that wall was flattened the moment TTNG composedly appeared on stage. It’s refreshing to see veterans of the scene play for such a small audience, bassist/singer Henry Tremain engages us with a grounded playfulness that fills the venue with the scent of an open fireplace warming a homely living room on a chilly night of a procrastinating spring, as we’re all made his guests on the sparkling notes of “Adventure, Stamina & Anger”.

The Collis brothers don’t miss a beat, Tim’s guitar twirls like a storm of glass in its frantic clarity, steadily supported by Chris’s vigorous drumming. Tremain’s vocals are longing, sweet, soaring undisturbed over the thundering instruments.

The band jokingly confesses they’ve lost their setlist, but it’s ok, the audience seems to be suggesting all the right tunes. They draw democratically from their whole discography and, while the new material is captivating, it’s the classics that really capture the crowd.

Someone in the front row gets carried away while singing along to “Chinchilla”s dreamy ending, tailing the song with a lonely extra howl. Tremain amusedly calls him out in this game of “musical statues”, dedicating the next song to him. Another concertgoer gets his spotlight as we all cheerfully intone “Happy Birthday to Josh” after he requests the performance of “If I Sit Still, Maybe I’ll Get Out of Here” as a gift from the band.

TTNG calmly move through the setlist, evoking a warm breeze here and a raging wind there, attesting full control over a deeply personal style that never falls into being a gimmick.

At the final date of their tour, the band doesn’t feel like playing games, the entire room formally agrees to sacrificing the whole routine preceding the encore: we just want one more song and they know it. They pick “26 Is Dancier Than 4” out of their classic self-titled album, to let the night linger on a nostalgic tinge. Bristol’s Old Market Street seeps adolescent energy as I leave the venue, an odd contrast to the now mature faces of the band members chatting with fans at the merch stall.