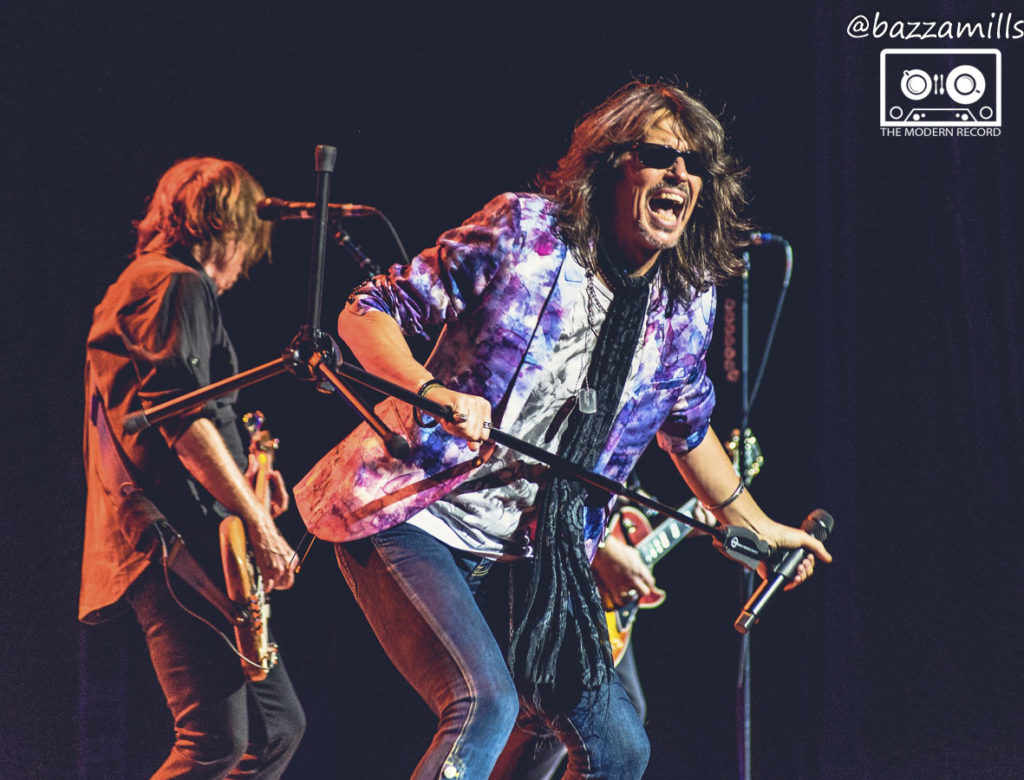 I get into my seat – yes, my seat – at a rock show. It seems wrong but then again I’m here to see Foreigner, who have been in the business for 40 years and are one of the world’s best selling recording artists, so they probably know what they are doing, right?

The evening starts promptly with opening act John Parr and his acoustic guitar. Parr is an Englishman who really made it in America with his hit song and title track to the classic 80’s ‘Brat Pack’ movie, St Elmo’s Fire. He reels off an impressive instrumental intro and drops into quite engaging chat, and then plays a selection of his hits. Whether you know who Parr is or not, you know the songs, not necessarily by the titles. ‘The Best’ is the song adapted by Gillette to form their classic tagline Gillette, The Best A Man Can Get. He also plays a cover of ‘Oh Well’ by Peter Green’s Fleetwood Mac, following up with his hit ‘Naughty Naughty’. He is a great opener for those who turned up early. 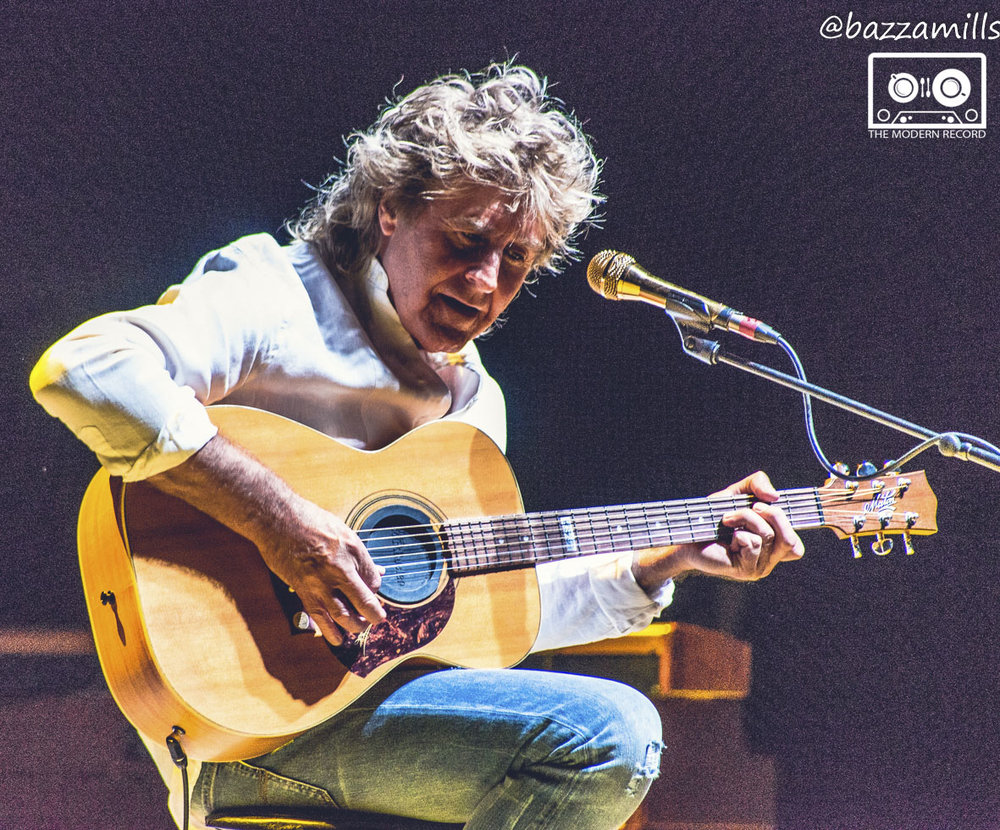 Next up are a four piece band led by Joanne Shaw Taylor. Taylor, it seems, is a blues/country style fingerpicking guitar powerhouse. The band are a standard drums, bass and keys setup, and they are tight and groovy. The drummer is a lefty which gives it a lopsided look, but along with the diminutive, dreadlocked bass player it is balanced just fine. The keys are mainly in the southern blues style and are played tastefully.

Overall the feel is a mix of country, rock ‘n’ roll and blues with driving guitar riffs and Taylor’s vocal a mix of Joss Stone and Amy Winehouse – not what I was expecting, but it just shows you that first impressions aren’t always reliable. I didn’t know any of the songs, but they all had a searing guitar solo in them which was a bit indulgent but I loved it.

As I wait for Foreigner to come on, the stage is turned around and set up with a keyboard pit and drums on a riser toward the back of the stage, complete with gong, very 70’s rock! The name of the main act is picked out on a chequer plate against the black curtain and it all looks very slick.

The room falls to darkness with keyboards arpeggiating and spotlights flashing, first onto the stage are keyboard player Michael Bluestein and drummer Chris Frazier, formerly with Steve Vai & Whitesnake. They are followed to the stage by the remaining members of the band, lead singer Kelly Hanson looking very much styled on Steven Tyler from Aerosmith – he formerly played with Hurricane, and sessioned for Slash’s Snakepit. Multi-instrumentalist Thom Gimbel (Guitar/Sax/Keyboards) in black fedora formerly sessioned with Aerosmith, Bruce Watson on guitar sporting a blonde perm and a pair of blue lensed aviator and finally, Jeff Pilson – bassist formerly of rock legends Dokken and Dio. That’s quite a collective CV, for a tribute act.

As they slip into the opening track ‘Double Vision’ from the album of the same name, I find myself thinking that this is the quietest rock gig I’ve been at, but the sound quality is impeccable, to the point where I’m questioning whether it’s heavily backing tracked. 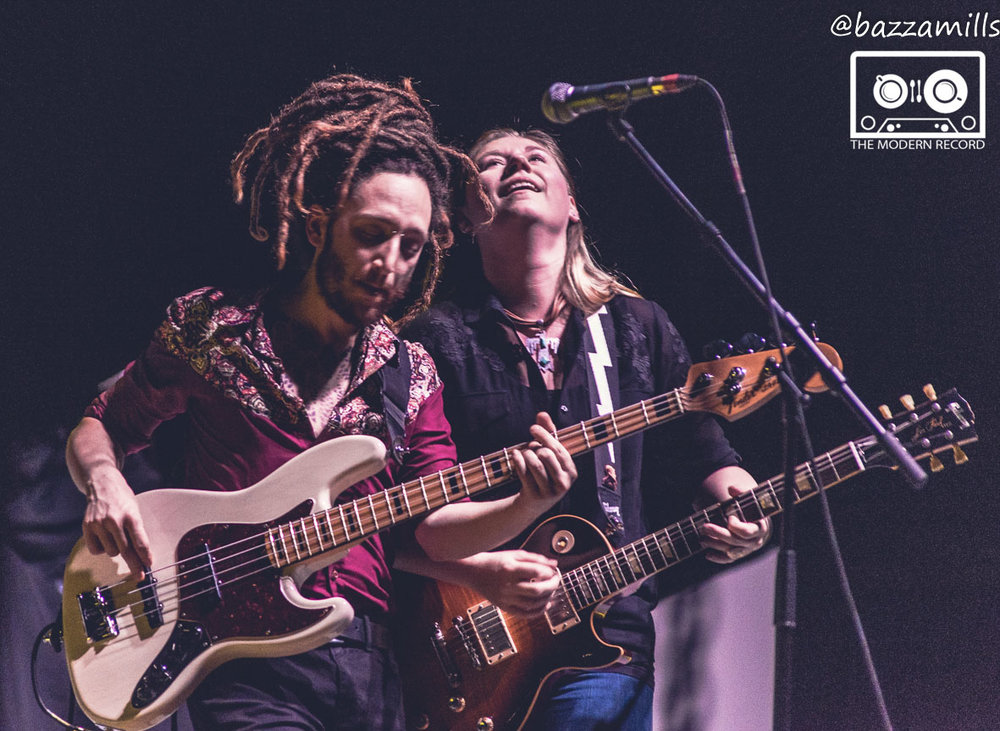 ‘Head Games’ is the next track, another album title track and the guitar sounds are very harsh and processed: just not to my taste, but the bands backing vocals are immaculate. Then they play one of their biggest hits in ‘Cold As Ice’, Gimbel moving over to keyboards for the classic intro riff……at this point the singer has had enough of the seated crowd and jumps in to animate things, running along my row of seats on the armrests and getting people up. It’s great showmanship and really gets the energy up in the room of predominantly 50 somethings.

Through ‘Waiting For A Girl Like You’ and ‘That Was Yesterday’ Hanson has to work really hard to keep the energy in the room and the songs don’t flow naturally one to another. After getting the girls to scream at being called sexy then getting the guys to shout out, he tells the room there seems to be plenty dirty white boys in the crowd and on stage, and they head into the track ‘Dirty White Boy’ in response.

The crowd are getting into it now and there are some real dedicated fans in evidence rocking out with fists in the air, the sold-out auditorium is loving them. Hanson decides to introduce the band at this point and it takes an absolute age to get round everyone….this was a bit indulgent for me as these guys are not the original band so in some respects, who cares? The energy dives a bit, then Hanson welcomes to the stage Mick Jones, songwriter and founder member of the band. He is looking very distinguished and by that I mean old.

Jones starts the next song, ‘Feels Like The First Time’, with an out of tune guitar, not the most triumphant entrance…. It all comes good as the rest of the band come in and he gets another axe. They get through the next one ‘Urgent’ with Gimbel on Saxophone duties.

Then there is a keyboard solo, followed by a drum solo…..which other than the drummers entertaining, water on the drum set splashing, was a bit of a yawn-fest and got lots of people back in their seats.

The band went off stage upon playing set closer ‘Jukebox Hero’, and came back pretty quickly. It almost didn’t seem like an end then an encore. They came back on stage and played ‘Long, Long Way From Home’ and then into their biggest hit (and only No.1) ‘I Want To Know What Love Is’, which was epic. They then closed out the night with ‘Hot Blooded’ which was a great closing song.

For me this was a strange venue for a high energy rock gig due to the all-seated format, that said frontman Kelly Hanson really worked hard to engage the crowd and put on a great show. The running order didn’t do them any favours and the keyboard/drum solo was indulgent and not very interesting. The band are not original members so it felt like a really well-executed tribute night with an appearance from Mick Jones, this was re-enforced by the fact that all the tracks were off of the first five of their nine studio albums and nothing after. The sound was immaculate but very quiet for the type of gig. Both support acts were very entertaining.