The weather is glorious as I approach what is a new venue for me – SWG3 in Glasgow to see LCD Soundsystem.

After much waiting about from the door time, opening act Young Fathers (from Edinburgh) come on stage around 7:30pm and they pack quite a punch from the moment the take the stage.They are a four piece with three vocals and one percussionist, two of the vocalists adding further texture with one periodically playing an extra floor tom drum and another setting up some synth pads and drum loops. The remaining vocalist is dressed in a string vest and the brightest yellow satin shirt I think I have seen. He is also easily 60% of the visual performance – his old school funk dance moves really catching the eye.

Even with the venue only two thirds full, these guys played like it was their own headline gig. The beats were tribal and the vocal melodies edgy rather than catchy, with mild hints of beatbox and rap interspersed. The crowd don’t seem to warm to Young Fathers, but they get a some respect and adulation when they are done.  The venue DJ comes back on with more dance music in the interlude, keeping the now almost full attendance vibing into the evening as the sun starts to dip. 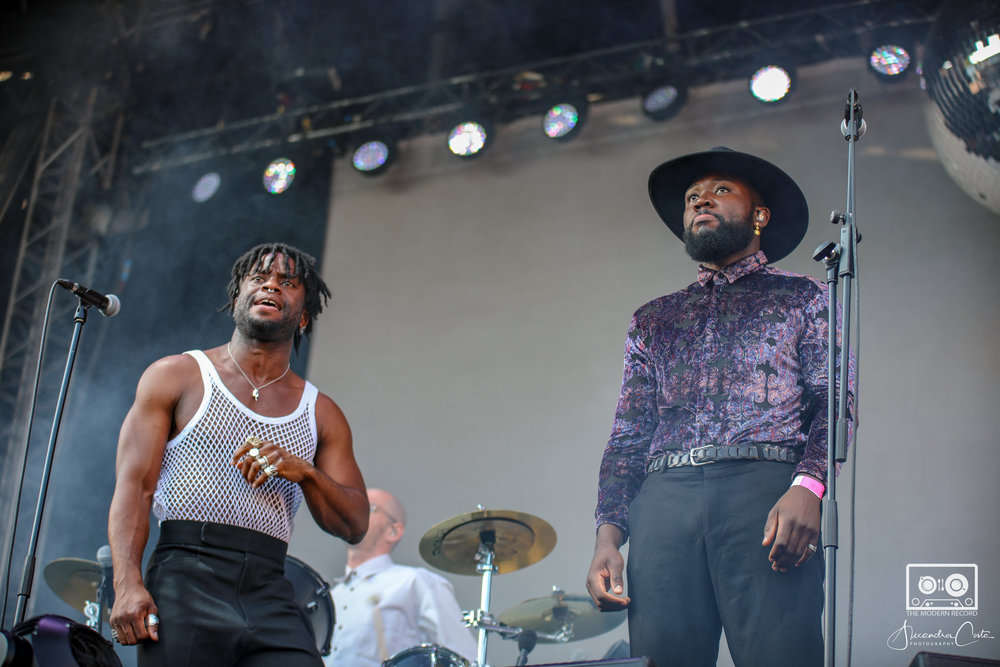 Around 9pm LCD take to the packed and cluttered stage – I think I counted eight of them and the amount of gear they have is impressive to say the least….this includes a huge mirrorball. They head right into ‘Oh Baby’ and you can tell from the crowd reaction that their fanbase is loyal and adoring. At the end of the song frontman James Murphy just waves at the crowd and the drummer brings the beat in for the start of ‘You Wanted A Hit’, but there’s a problem with the main keyboard….cue sound man crawling about the stage at Nancy Whang’s feet and James Murphy hitting keys. This seemed to take an age to sort but the drummer just carried on until it was fixed, and of they went straight into the track.

‘Tribulations’ was up next followed by ‘I Can Change’ and ‘Get Innocuous!’ – I wasn’t overly familiar with the band’s music prior to the gig but the live performance seemed to included some experimental sounds, which gave the impression of treading the line between electronic and traditional creation. Murphy looks like a cross between comedian Rhod Gilbert and Elbow’s Guy Garvey, his chat was quite refreshingly down to earth and his stage persona at odds with the music itself…..I found myself contemplating whether this was a great well crafted counterpoint to the whole feel of the band or just an accident. 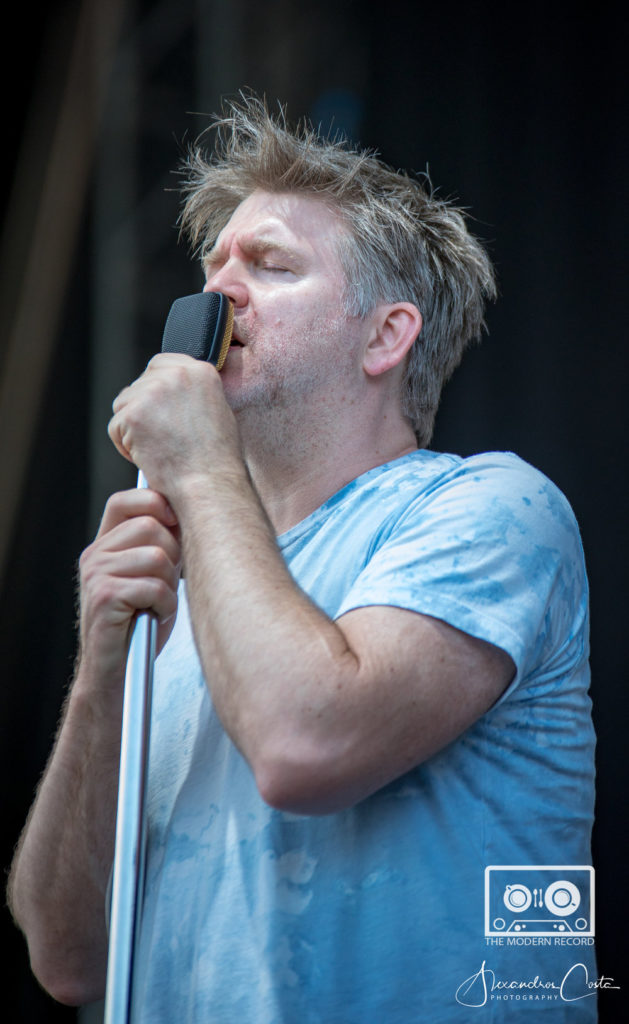 ‘Call The Police’ and ‘Movement’ are followed by ‘Someone Great’ and I’m really starting to get into it, the songs are interesting and full of texture and light and shade without being overpowering. The tracks really build in intensity to a cover of Chic’s ‘I Want Your Love’ and then a couple of crowd pleasers in ‘Yr City’s A Sucker’ and ‘American Dream’. Murphy, at this point rather unpretentiously tells the audience they will be back in two minutes, because they are all away to take a piss.

True to his word the band are back pretty quickly. and play an encore of ‘How Do You Sleep?’, ‘Emotional Haircut’, ‘Dance Yrself Clean’, before finishing with the classic All My Friends. During the encore the light show – which has been good all evening – just moves up a level and looks immense.

A top night all-round, first time I’d seen LCD Soundsystem and I thought they was great: sound on point and a cracking light show. The set list seemed to build through out to the end and the reaction to them created a great outdoor atmosphere.