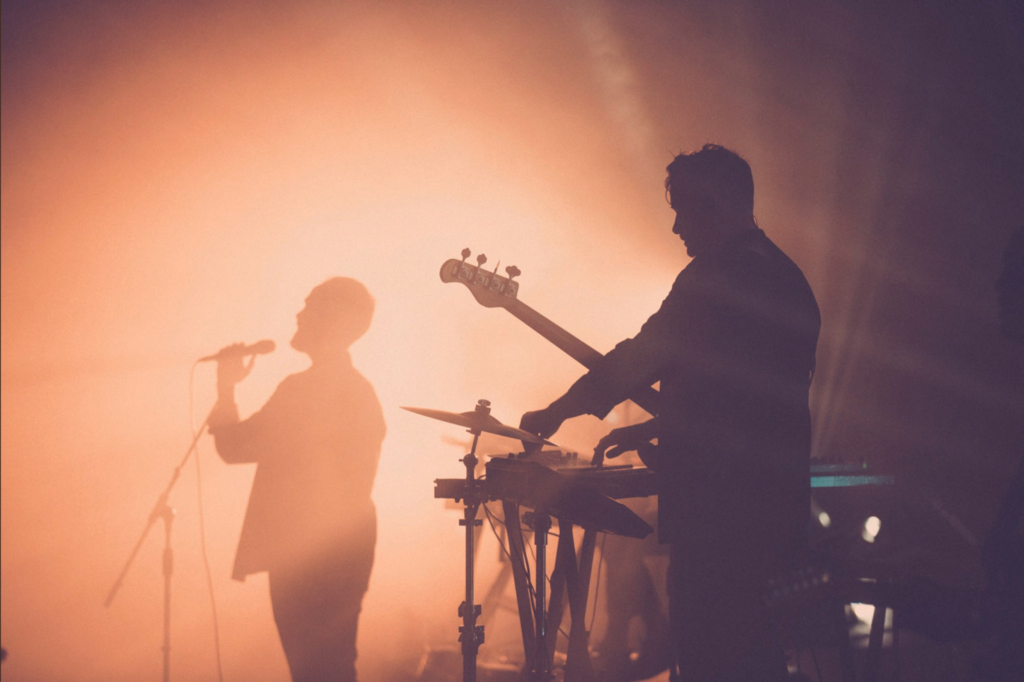 ‘This live project started up 15 years ago in a pub in Shoreditch, and now it has ended up with two sold-out nights here’ – Bonobo’s (real name Simon Green) rise has been a steady, but notably impressive one. His most recent trio of studio albums – 2010’s Black Sands, 2013’s The North Borders and his most recent effort in 2017’s Migration – has put him in the higher echelons of Britain’s electronic music scene, packing out venues across the UK and becoming a worthy festival headliner. After a pair of sold out dates at O2 Academy Brixton last February, it was only natural for him to continue his UK headline tour in support of Migration to its near-end,with a return to one of London’s most iconic venues.

Support for the evening was easily one of the more diverse offerings I’ve personally witnessed. First up were Innov Gnawa, a band from New York playing a form of traditional Moroccan music known as Gnawa for the gathering crowd. It was an unusual but welcome sight to see music from this part of the world being aired in such a venue as Ally Pally: the five band members clearly enjoying the experience and met with a shared appreciation from the audience.

The other support slot fell down to GoGo Penguin – a trio whose musicality and technical proficiency at their respective instruments was apparent right from opener ‘Raven’. Nick Blacka’s complex but efficient approach to double bass was met with Chris Illingworth’s expansive piano sound and Rob Turner’s urgent drumming. Their most recent album A Humdrum Star is out now via Blue Note Records, and if you like your music intricate, they’d be one to check out.

Just after 9pm the stage lights dim into a hazy glow for ‘Migration’ – the self-titled track from Bonobo’s most recent album. The exact sound that his music falls into is hard to nail down: full of organic textures and chimes, swirling synth atmospheres and flowing orchestral arrangements; set to a mix of minimalist club-infused beats and avant-garde percussion. This hybrid between the realms of electronic and live instrumentation in theory should be difficult to reproduce on a stage – however Bonobo handles this with ease, sparing nothing in translating his eclectic compositions live. Accompanied by none less than a guitarist; two keyboardists; a drummer; horn and trumpet players and a full string section, from his station (set up with MIDI controllers, cymbals, a Korg Minilogue synth and a sample pad) he was both conductor and bandleader, frequently switching instruments throughout the almost two-hour long set. For a composer with an extensive background of solo albums behind them, the live show is much more a collaborative effort, and is refreshingly so.

Several guests joined Bonobo on stage to add a new dimension to some of his tracks – vocalist Szerdjene was first on for her feature from Black Sands in ‘Towers’, before returning to the stage intermittently to provide her own emotive renditions of ‘Stay The Same’, ‘First Fires’ and ‘Break Apart’. Nicole Miglis of indie band Hundred Waters reprised her soothing, ethereal vocals for ‘Surface’, while Jordan Rakei came straight in from Field Day to fill in for Nick Murphy on ‘No Reason’. Perhaps the finest moments of these came when Innov Gnawa returned to the stage from their earlier support slot, to perform Migration highlight ‘Bambro Koyo Ganda’ to a thunderous reception.

Aiding the grand ensemble on stage was the awe-inspiring visual and sound setup on display – The London crowd were left stunned by the five large screens at the rear frequently exploding into colour to silhouette the band; the laser and light sequences throughout illuminating the Great Hall at Ally Pally to great effect. Main set closer ‘Kerala’ was the pinnacle of the audiovisual experience, bringing everyone present to the point of euphoria – the confetti blasted over the crowd to coincide with the main drop was a truly memorable moment.

After a brief pause, Bonobo and his band returned to play a much more subdued encore of Migration tracks ‘Break Apart’ and ‘Figures’. After the intense, uptempo feel of the past two hours this definitely felt more of a postlude, a chance for the crowd to recover and reflect on what they had witnessed. While this perhaps marks the end of an era for Simon Green and his Bonobo project – he admitted on stage that these shows would be the last shows in London for a considerable amount of time – these shows have reinforced the brilliance of his artistry, both as a composer and as a live musician.