American alt-rock band Belly returned to Glasgow’s Garage on Saturday night two years after their comeback tour, having salvaged the only Scottish date on their Dove tour after the fire which devastated Glasgow School of Art’s Mackintosh Building and nearby O2 ABC venue, where they were due to play. With no support act, and instead of a show of two halves (even rock goddesses of a certain age need a ten-minute pee-break, you know), Tanya Donnelly begins with a simple message of condolence regarding the fire before bursting into ‘Low Red Moon’, from their 1993 debut album Star.

Donnelly’s deliciously bittersweet vocals are flanked by bassist Gail Greenwood and her low-stride bass-swinging. The way she stomps the stage never fails to raise a smile; that woman has so much energy, lethargic teenagers everywhere should be forced to watch and learn. Greenwood owns the audience with her lively banter and after revealing her Scottish heritage on the 2016 tour, this time round shows off a Scotland flag ‘from my granny’s attic’, which proudly masks her amp. 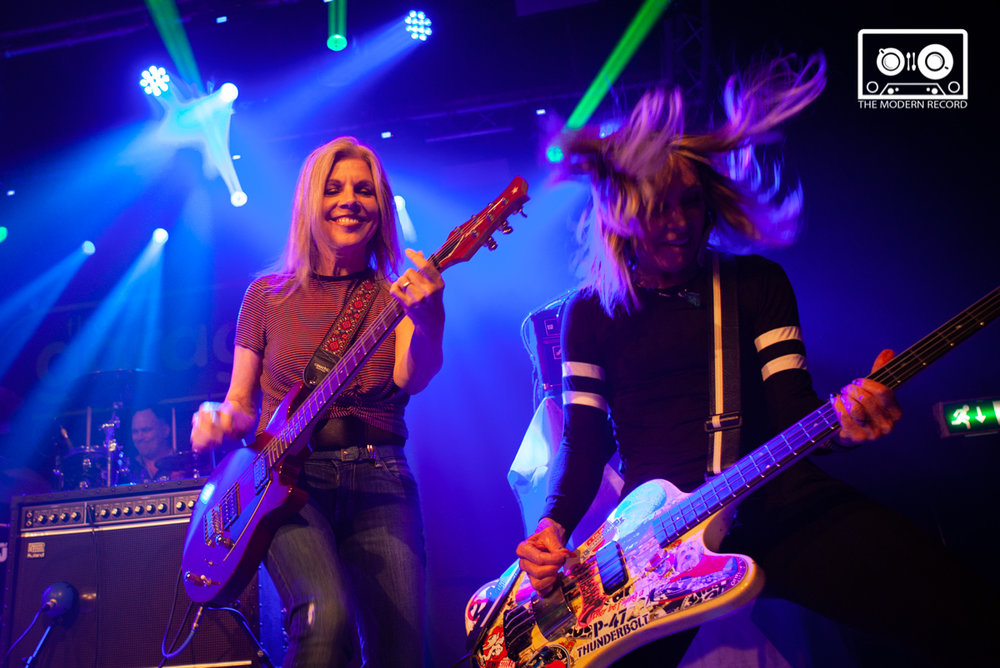 Second up is ‘Mine’, the opening track on Dove – the band’s first album in 23 years – followed by the pulsating bass that can only mark the start of ‘Dusted’, Donnelly’s saccharine vocals once more betraying the lyrics. Next up is ‘Army of Clay’, another new track and arguably the strongest, blending disembodied chord changes which wouldn’t be out of place on Star.

Brothers Chris and Tom Gorman complete the Belly line up, with guitarist Tom getting nagged at by the ladies for failing to master the solo on ‘Stars Align’. I guess a bit of on-stage bickering never does any harm but it still sounds fantastic to me! ‘Gepetto’ finishes off the first set beautifully.

Toilet trips complete and pints spilling down us again, the second set kicks off with ‘Seal My Fate’ from 1995’s King followed by another new number in ‘Shiny One’, their first fully collaborative song. ‘Red’ fills the room with its familiar and catchy presence, while the highlight for many is predictably the gloriously sanguine vocals of ‘Feed the Tree’, Belly’s first big hit and possibly most memorable.

The loyal audience, many of whom originally followed Donnelly’s first band (The Throwing Muses) back in the late 1980s, have been spoilt over the last few weeks with the Breeders, Kirsten Hersh, Fred Abong, and L7 all touring the UK. The show draws to a close with the melodic ‘Human Child’, before zipping into an encore (seriously, they didn’t even leave the stage) of ‘Starryeyed’ and ‘Spaceman’. No ‘White Belly’ though, a personal favourite. No doubt I’ll come back next time to see if I’m in luck…

The audience leaves, extremely satisfied and thankful that Belly’s promoters managed to sort out an alternative venue in the nick of time, as smoke continues to bellow 300 metres along Sauchiehall Street. On their Facebook page later, Belly post of their gratitude to everyone involved and their wishes for ‘Godspeed with the rebuilding’.

THE SKIDS, FROM THE JAM & BIG COUNTRY // KELVINGROVE BANDSTAND, GLASGOW