At the Hydro in Glasgow tonight to see Hollywood Vampires by all account an intriguing mix of rock music and film stars playing predominantly cover versions. Quite excited to see Joe Perry of Aerosmith fame alongside Alice cooper and the intrigue is Johnny Depp an A-list film star treading the boards at a rock concert with some legends of the music industry. 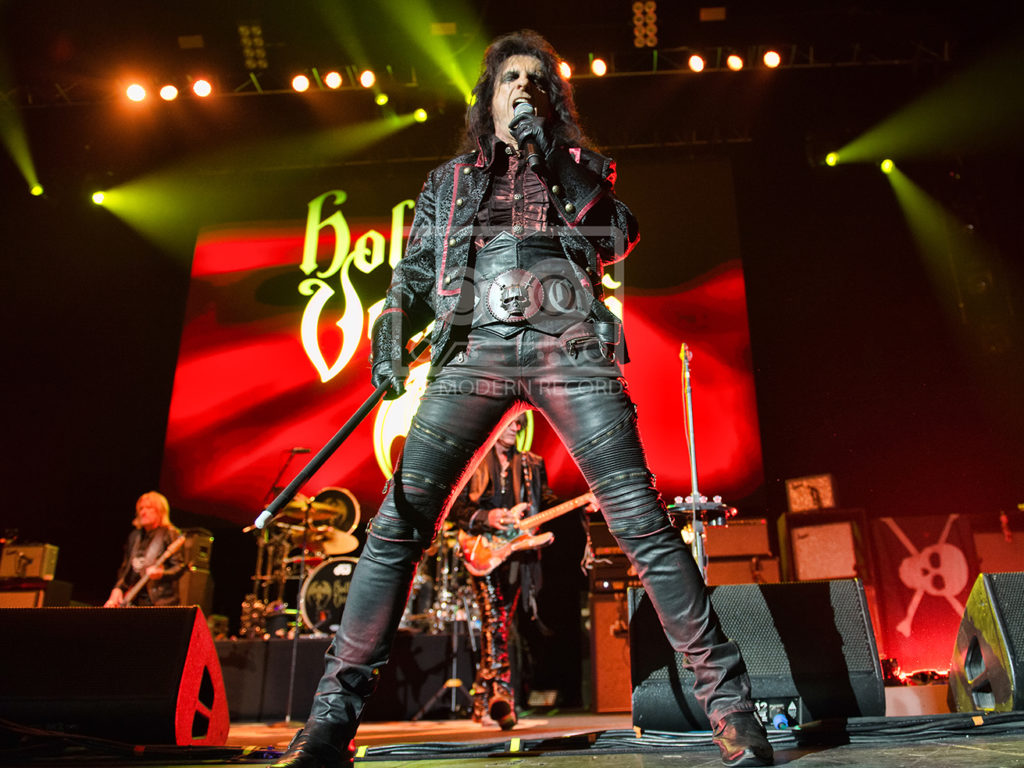 I get to my seat in the Hydro just as the opening band take to the stage to what sounds like the theme from the Dam Busters and it’s The Damned, ageing punks that they are, with Captain Sensible still sporting the red beret and making cheesy references to Happy Talk, unfortunately, the main reason why he is so recognisable.

The lead singer with his slicked back hair and and dark glasses looks like a goth version of Bono for U2. This 5 piece are going through the motions but seem to be enjoying themselves. Surprisingly, the hall is over half full even they early in the evening.

The Damned’s set has great energy and the punk rock through it. Ignoring the drivel and unengaging chat the music is OK and pretty decent for an opener. They even get the crowd on their feet for the last two tracks…good effort. 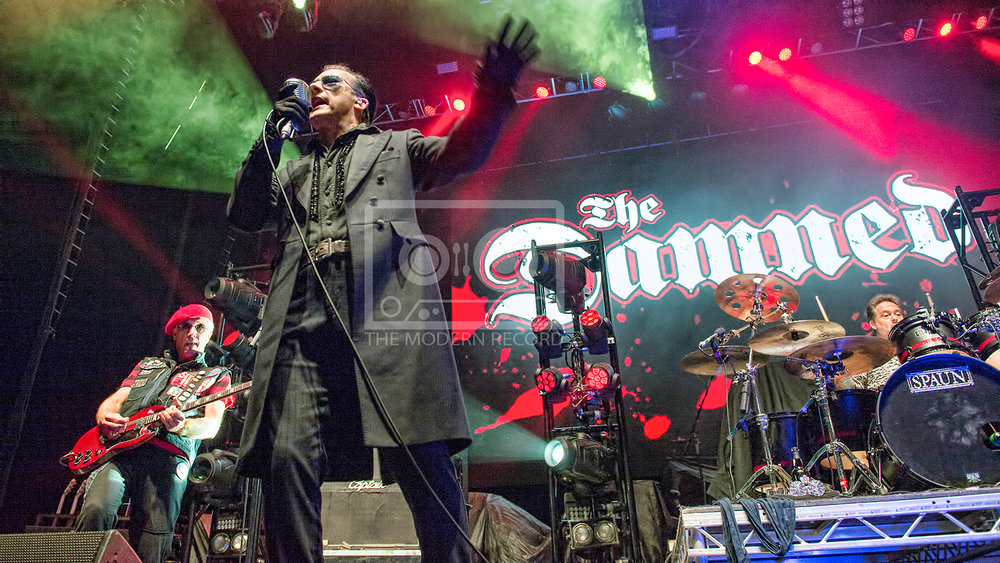 The hall really fills prior to support act No. 2 coming on, and I don’t mind admitting that it’s one of my favourite live acts, The Darkness and they don’t disappoint.

Lead Singer, Justin Hawkins comes out in what I can only really describe as a white safari suit and they are straight into Solid Gold, which is a newer track for them and but really catchy.

They then power through a couple of tracks from their debut album Permission to Land with Growing On Me and Love Is Only A Feeling. The band are tight and Hawkins ever the showman is cavorting around the stage, his voice amazing given the pitch he sings at. The guitar sound dynamite and the stage show is bang on.

Lots of heads banging in the Hydro to The Darkness’ brand of slightly retro inspired rock. Justin’s chat between songs is very funny and he has people up dancing in the aisles.

Halfway through their set he strips off to show his tattooed torso and tries to get the Glasgow crowd to help him sing the sweary bits of second last track Get Your Hands Off My Woman and failing but all in good humour.

They finish a great, punchy set with their best known track, I Believe In A Thing Called Love. I’m ready for The Vampires now. 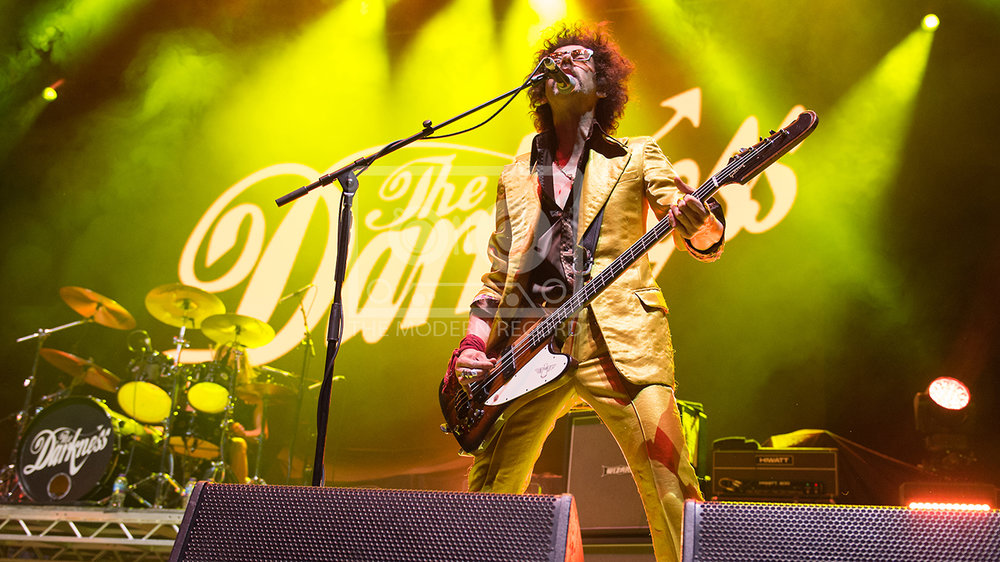 The Vampires dummer Glen Sobel (Alice Copper & Motley Crue) appears first and take the expectant cheers from the crowd as one by one the rest of the band take the stage. Seven of them once they are all out.

Lead vocals is the ultimate, unique showman Alice Cooper who I saw last November at a definite night to remember……his own show was a pantomime spectacular but this looked to be a lower key affair with a large screen behind the band showing video clips.

Also on the stage are a keyboard player and bassist and surprisingly, three guitarists – Tommy Hendrickson, Alice Coopers axeman, the rock guitar legend that is Joe Perry from Aerosmith and Johnny Depp…not introduction needed.

The Vampires get straight into it with I Want My Now & Raise The Dead two of six original Vampires tracks. That is if you don’t count Alice’s two and Joe’s two in a set of predominantly covers. I’ll not go into every song in the set as you can read that below but this must be the most famous line up in cover band history, if there is such a thing.

The overriding theme for the night is the death of rock and film stars, as during a few of the tracks the video montage show images of John Bonham, John Entwistle, Bowie, Hendrix, Marc Bolan and Jim Morrison.

The music is good and played well, Joe Perry seeming to feel his way into the set as the first solo was a little hesitant. Not sure if he was having some trouble with hearing his monitor mix but the rest of the show his guitar sound and playing, as you would expect, is awesome.

The one strange detail in the show is presence of Johnny Depp, although I would have said at least 40% of the Hydro crowd were there to see him, a few dressed in pirate costumes. But the elephant in the room for me is the fact that from a guitar perspective he didn’t really add much, I wondered at times if he was plugged in. As for performance he roamed the stage with an odd limp for most of the gig and other than that there was no real performance.

My reservations about Depp aside, he sang a couple of times and did Lead Vox on a cover of Bowie’s Heroes, which was pretty well observed.

They played a Yardbirds track Train Kept A-Rollin’ to close out the 18 song main set. The gather Glasgow crowd were on their feet for most of the show and loving it, the energy in the room was high and it was a great show from those glitzy performers.

All in all a great gig, the headliners were a great spectacle but Alice and Joe need to have a word with Depp about putting on a performance….or perhaps Justin could show him what that is!