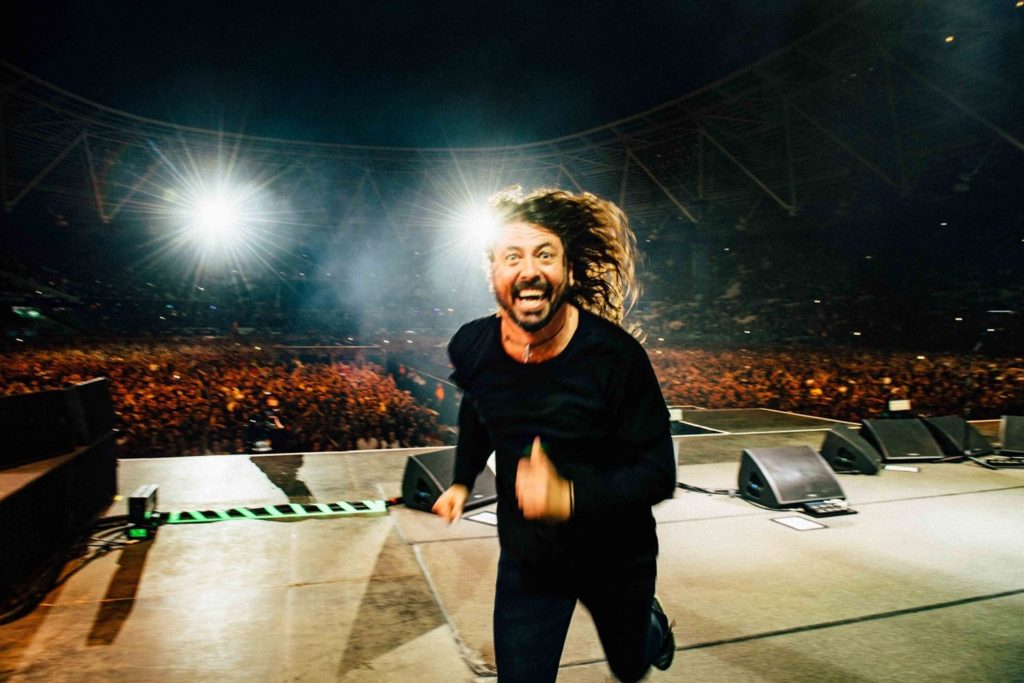 Foo Fighters are a band that don’t do things on the small side. Sure you may be one of the lucky few that might catch them in a small room every once in a while (their secret UK tour as ‘The Holy Shits’ back in 2014 comes to mind), but even then the Foos can fill the smallest space with their cavernous rock sound, like they are playing to the most gigantic one imaginable. So of course when they do play stadiums, how big does it sound? Answer – larger than most of us can comprehend.

Where the UK leg of the Concrete and Gold tour lacks in quantity – with just three dates across the UK, two of those being at London Stadium – it makes up significantly in quality, the band going all out to bring a fulfilling experience to their adoring, sizeable and somewhat patient British fanbase. A pop-up merch stand and BBQ was run underneath the familiar sight of the ArcelorMittal Orbit in the Queen Elizabeth Olympic Park, where customised Foos skateboards and tea towels sporting the band members’ faces were among the items available for purchase…

Adding to the experience were the quality support acts brought along for the ride. For the first night of the London residency, two of the most exciting British bands around at the moment were on board, in Frank Carter and the Rattlesnakes and Wolf Alice. Coming off headlining Brixton Academy last December, the hardcore punk rock energy that Frank Carter can channel had no problem in bringing the gathering crowd at London Stadium onside. Frank and guitarist Dean Richardson were on top of the inner circle by the middle of ‘Juggernaut’; riling everyone and their mother to scream how much they despise each other for ‘I Hate You’. Having followed this band from supporting Sum 41 at the comparatively diminutive Forum venue in Kentish Town a couple of years back, they never do things by halves and this set was no exception.

Sadly Wolf Alice did not quite capture the crowd’s imagination as much, however personally I thought their twelve song set was one of the finest performances I’ve seen them do. The task of being main support to one of the greatest rock bands around is unenviable, but the band took it in stride. Getting through a set that leaned heavily on the rockier moments from their album Visions of a Life, the many personas that Wolf Alice’s music take were showcased from the superlative, tranquil single  ‘Don’t Delete the Kisses’, to the emo punk-tinged ‘Space & Time’ – featuring guitarist Joff Oddie literally just attempting to feedback his guitar throughout. Whilst perhaps under appreciated on the day, they are formidably good live. 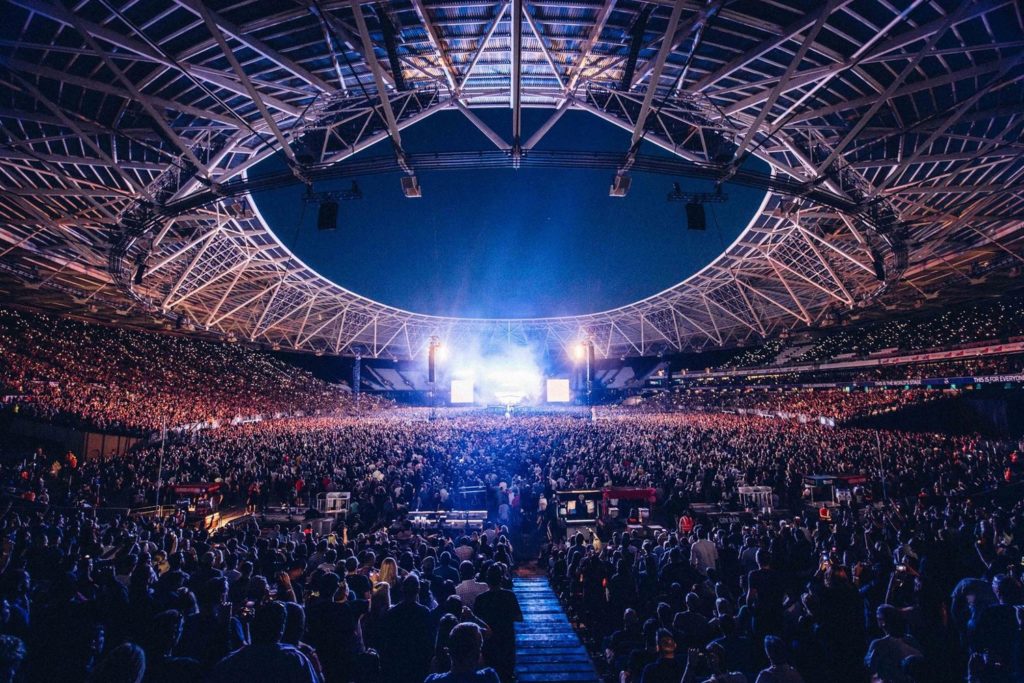 Taking the stage to a deafening roar just after 8pm, Dave Grohl and company wasted no time getting stuck in. ‘All My Life’, ‘Learn to Fly’ and ‘The Pretender’ all followed in rapid succession, some of the biggest tunes the band have authored. Even when the Foos took a dive into latest album Concrete and Gold, the enthusiasm of the fans did not diminish – ‘The Sky is a Neighborhood’ and ‘Sunday Rain’ both being met with a massive chorus from those gathered at the stadium.

The extended jam that followed ‘Rope’ did go on long enough to feel a tad self-indulgent. But then again when you’re in a band that is playing in front of 70,000 people, you should be granted those occasional moments. You could argue that this time could have been better used to fit even more songs in, but with the extreme stress that Dave Grohl puts on his voice each night screaming his way through a Foos show, it can be forgiven that he might need some vocal rest every once in a while. 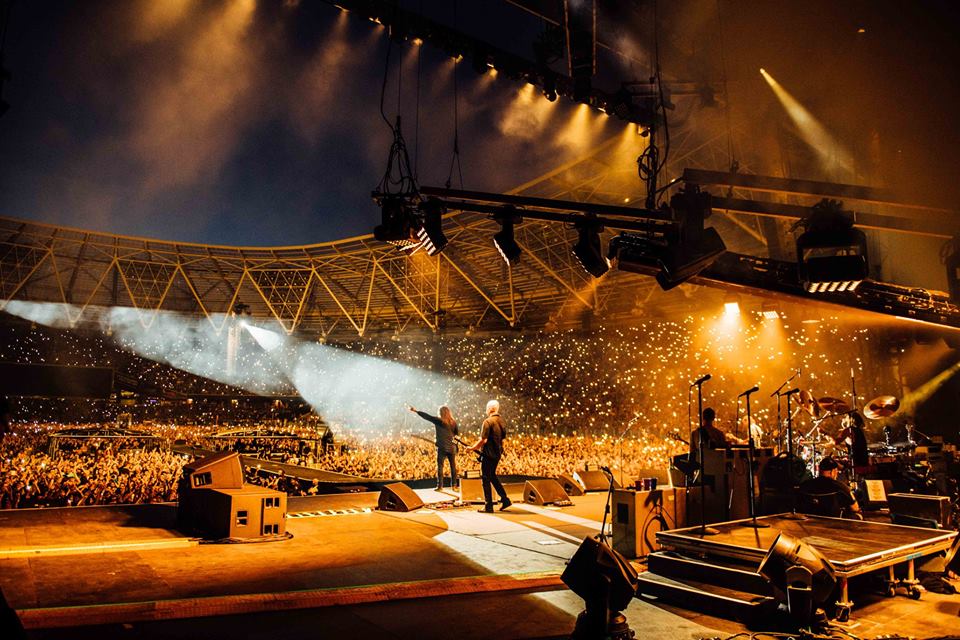 The set took a brilliantly bizarre twist mid-way through, with the band taking on multiple interpretations of some absolute rock classics. Nothing could sum this up more than a take of Van Halen’s ‘Jump’, mashed up with the instrumental from John Lennon’s ‘Imagine’. It worked….. somehow. Guitarist Chris Shiflett took the lead for an electric version of Alice Cooper’s ‘Under My Wheels’, while drummer extraordinaire Taylor Hawkins and Grohl dueted on a passionate, emotional ‘Under Pressure’ – emphasising how much of a collective effort Foo Fighters is, rather than the common perception that it serves as Grohl’s solo project. Amongst the predictable but eclectic selection of Foo Fighters’ greatest hits that made up the set, this truly made the show its own beast.

Of course though, the best was left until the end. Powering through ‘Monkey Wrench’, ‘Breakout’ and Concrete and Gold lead single ‘Run’ amongst other Foos blockbusters, Grohl paused before ‘Best of You’ to address fan rumours spread via Reddit about the ‘declining’ state of his voice. The rendition that followed, well and truly dispelled any thought of this being at all true.

After leaving the stage, Grohl unexpectedly appeared via video link on the giant screens that flanked the stage, to hype up the cheering crowd. Declaring that ‘we only have time for one more song, so we’re going to play two’ in the finest Dave Grohl fashion, the band erupted once more into ‘Times Like These’ and the timeless The Colour and the Shape hit ‘Everlong’ – set to a cascade of fireworks above the stadium. A euphoric ending to an evening of the finest in rock ‘n’ roll, clocking in at just under three hours.

Foo Fighters are without question, one of the biggest and best international stadium rock acts in demand at the moment. The greatest band on the planet entirely as of current? Definitely in the running. The Foos are at the top of the music world for a very solid reason: they go big, or go home. How do you get bigger than two epic nights at London’s newest and finest stadium?