For an artist such as Elvis Costello and the back catalogue he owns, even the least enthusiastic fan would still find something in this evening’s setlist to bring a smile to the face, but tonight there was no reason not to smile.  Elvis, with his Imposters opened up their two and a half hour show in Edinburgh’s Playhouse Theatre with the song ‘Wonder Woman’, followed by ‘Girls Talk’ – a track taken to the UK charts by Dave Edmunds in 1979 and later released by Costello as a B side to his cover of Sam And Dave’s ‘I Cant Stand Up For Falling Down’ in 1980.

Backed onstage by Steve Nieve, Pete Thomas and Davey Faragher, with Kitten Kurio and Briana Lee on backing vocals, Elvis and the band ran through a collection of tracks old and new, from throughout his illustrious career. Some have been reworked and revisited with new arrangements which seem to go down well with the audience, albeit some more than others.  The less well known album tracks always give time for some to visit the bar for a light refreshment! 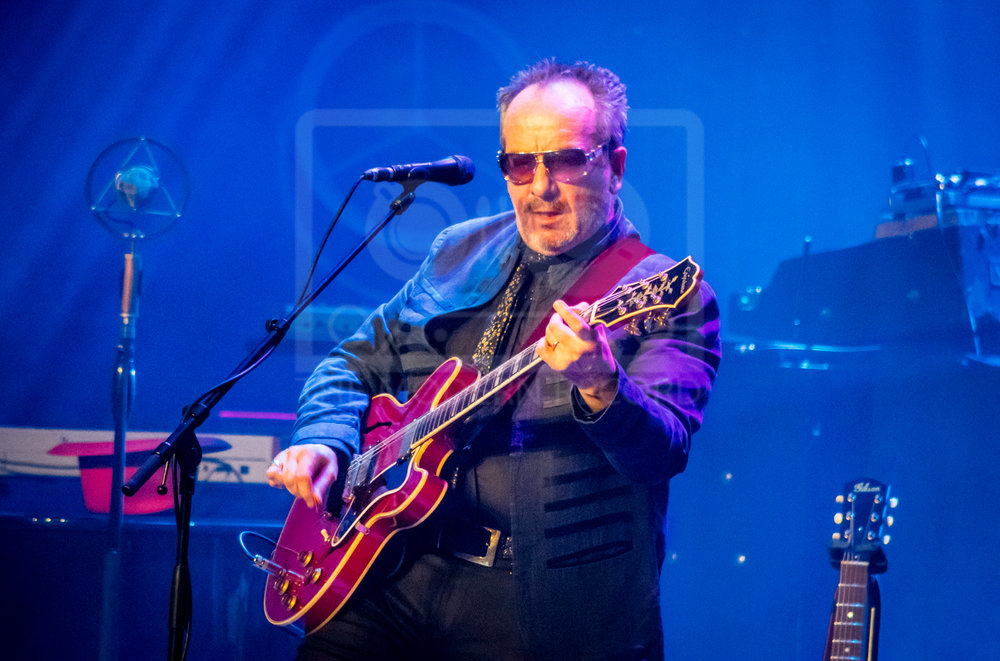 But back to the setlist and the hits started coming, getting the crowd on their feet.  ‘Radio Radio’, ‘(I Don’t Want To Go to) Chelsea’, ‘Watching the Detectives’, ‘Pills and Soap’ were all sandwiched between album tracks such as ‘Tears Before Bedtime’, ‘New Lace Sleeves’ and ‘You Shouldn’t Look At Me That Way’.  ‘I Want You’ closed the first half of the show as the band left the stage for a short interval before Elvis returned, accompanied by Briana and Kitten for a semi acoustic rendition of ‘Alison’: his second solo single from 1977.

Costello then played a track from a recent collaboration with Burt Bacharach soon to be part of the musical I Still Have That Other Girl before delving back to his work with a reworked version of ‘Accidents Will Happen’ – sung with Steve Nieve on piano, this arrangement first recorded at Hollywood High in 1978.  The Charles Aznavour classic ‘She’ was next, recorded by Costello for the film Notting Hill, and a song that he could easily call his own.

A barnstorming climax to the evening included classic tracks such as ‘Olivers Army’, ‘(Whats So Funny ‘Bout) Peace, Love and Understanding’, ‘I Can’t Stand Up For Falling Down’ and ‘Shipbuilding’, a song inspired by the hypocrisy of war. ‘High Fidelity’, ‘Every Day I Write The Book’ and ‘Pump It Up’ closed an evening that no one could complain about for the lack of value for money.  Slightly over two hours and 30 minutes on stage, 30 tracks and a genius at work who could easily play another 30 track concert tomorrow and not duplicate a song, such is the extent of his work.  A fantastic performance from all members of the band.  What more could anyone ask for?