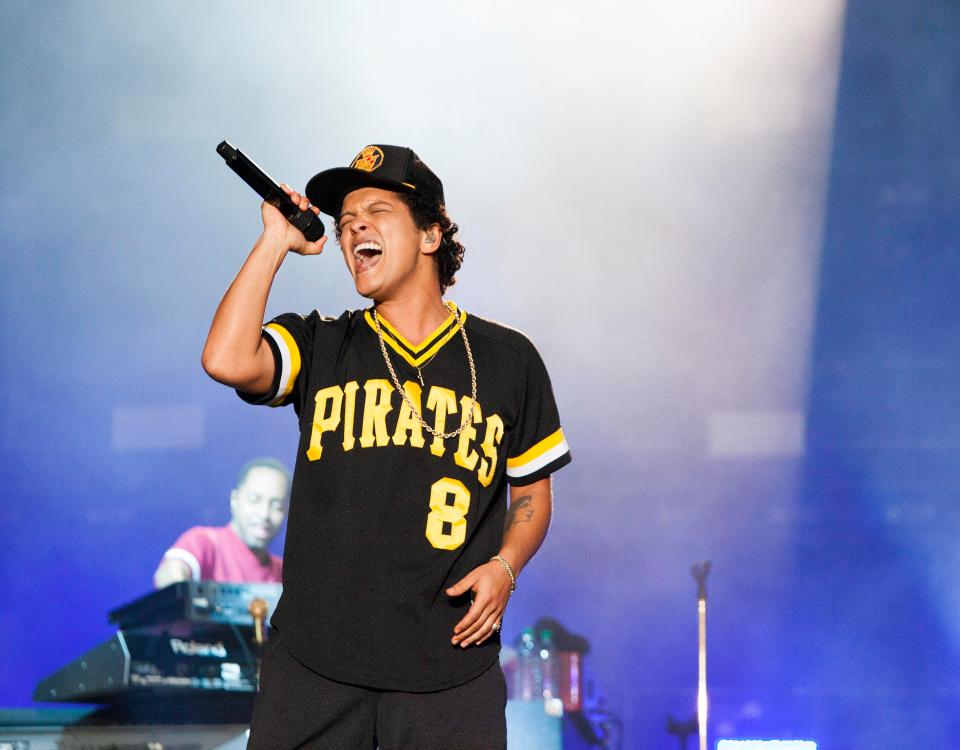 Due to the day job (damn thing has a tendency of getting in the way of early outdoor showtimes!) we miss tonight’s openers DNCE and Average White Band, but from chatting to folk who have been here from the start they give very positive reviews of them.

We arrive at Glasgow Green just in time for pop sensation Dua Lipa starting her set. Taking to the stage in a bright lime green tracksuit (quite possibly chosen to wear because of the venues name…), she gets the crowd going from the very beginning.

Her songs have everyone in attendance singing along, the oh so catchy “IDGAF” being a perfect example. Set closer “New Rules” sees her get everyone to crouch down and jump back up for the final chorus, which makes sure the energy is still in full flow and everyone is warmed up for the headliner.

While the stage is being set, we are entertained by DJ Rashida, spinning a good mix of chart hits to keep everyone in the party mood.

A white curtain covers the stage before an auto-tuned voice comes over the PA system to get everyone hyped up. It’s not long before Bruno Mars bursts out, accompanied by an array of fireworks shooting out from the back of the stage, and into “Finesse” from his most recent album ’24K Magic’.

The fireworks continue (he seems to like them a lot, not a bad thing!) as we then get album title track “24K Magic” which is swiftly followed by a superb rendition of “Treasure” from 2012’s ‘Unorthodox Jukebox’.

It’s after 4th song “Perm” that things take a rather odd turn for the show, with the performance being stopped for 8 minutes due to a safety incident. We soon discover this was caused by onstage pyrotechnics causing a small fire at the back of the stage. This is perfectly described to the crowd in the best way possible, as after returning to the stage, during “Calling All My Lovelies” in the breakdown of the song Bruno sings “we set the stage on fire in Glasgow, better call the fire department!”

Things are back and running as smooth as ever, with a definite set highlight coming in the form of chart hit “Marry You” from 2010’s ‘Doo-Wops & Hooligans’, which is introduced with the wedding march played as a guitar solo.

This is then followed with a drum solo by Bruno’s backing band, The Hooligans, drummer Eric Hernandez.

More hits follow with “Runaway Baby” and “When I Was Your Man” before we get an extended solo from pianist John Fossit which leads us into the main set finale of “Grenade”, “Locked Out Of Heaven” and crowd pleaser “Just The Way You Are”.

An encore of the amazing “Uptown Funk”, accompanied by even more fireworks, is the perfect way to close off what is a tremendous evening.

Bruno Mars puts on one hell of a show, so catch him on tour if you can!