Despite thunderstorm of heavy rain and gusty winds from River Tay close by, also problems getting Up to Dundee from London… RITA ORA still continues to keep the Dundonian crowd happy. Rita Ora makes her second live appearance on Scottish soil this year with a fab performance at Dundee’s newest outdoor music venues Slessor Gardens, despite performing in heavy rain which appeared soon as she about step on stage. It has been six years since Ora’s fans got the release of her debut album ‘Ora’ and fans have to wait for a sophomore album which has been pushed back due to various reasons, although it has been said we should expect the album by early next year. Although making her live comeback kicking off her new tour tilted ‘Girls Tour’ back in May at Glasgow’s O2 Academy, Ora doesn’t see this ‘comeback’ to the music scene, as over past few years she made appearances as a judge on The X Factor and The Voice, which has sustained her public visibility, while also releasing some non-album singles and collaborations which have kept her up at top of the charts.

Despite selling-out her UK Headline tour back in May earlier this year, Ora struggled to sell-out her Dundee Slessor Gardens show, promoters ‘LHG (Lizz Hobbs Group)’ made the choice to lower-tickets days before the concert on a discount site… priced at £19, which lead to backlash from fans who payed full-price when tickets first went on sale. Although promoters defended their decision but did make Slessor Gardens fill-up with fans – Despite this, from the start to finish, Rita Ora and support from likes of SIGMA, MNEK and Hannah-Jane Lewis who opened up the show, left the Dundonian crowd with high spirits when leaving the venue, despite the horrible weather. 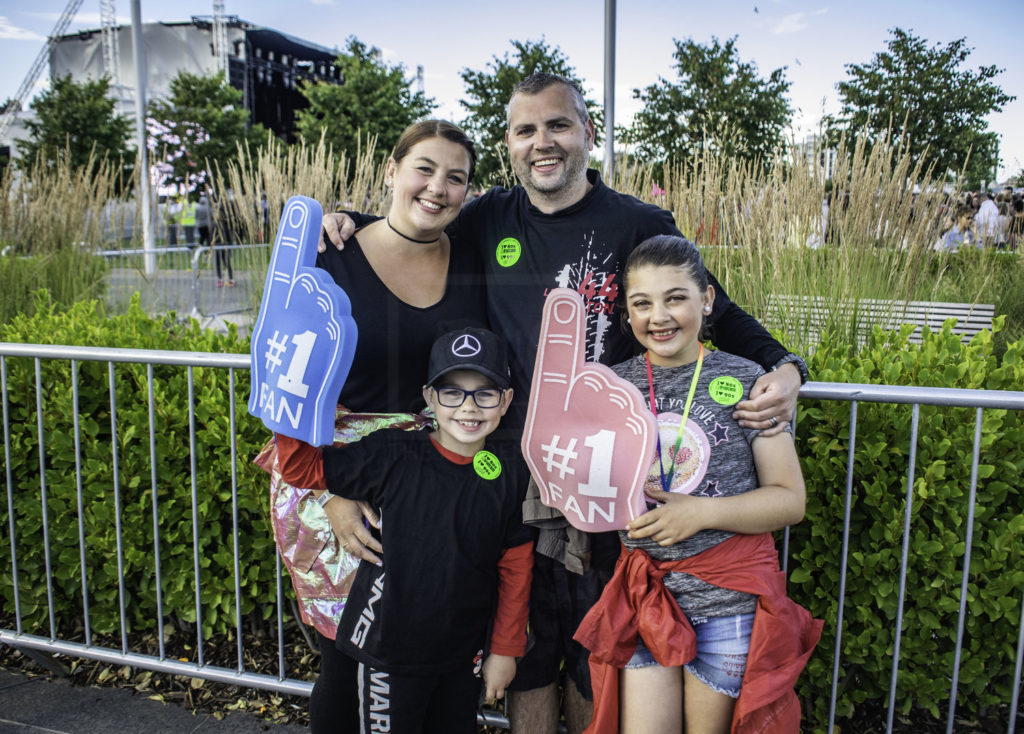 As doors opened at 4pm, the venue started filling up with fans ready to see their headliner ‘ RITA ORA ‘. The crowd started warming up when Hannah-Jane Lewis appeared on stage, performing to hundreds of people, appeared to be this might have been Hannah-Jane Lewis’s biggest Scottish crowd as well biggest performance yet in Scotland, Next up on stage was the brilliant ‘MNEK’ who well known for his hit-singles ‘The Rhythm’, ‘Don’t Stop Me Now’, ‘Deeper’ and ‘Colours’, as well as hit collaboration ‘Never Forget You’ with Zara Larsson. MNEK left the Dundonian crowd with high and happy spirits, performing his track with his backing dancers and singers. He was definitely right choice to open up for Rita Ora at Slessor Gardens.

Next up were the fan favourites ‘SIGMA’ who bought their live DJ-Set performance to Slessor Garden’s instead of their normal concert stage set-up. SIGMA really got the crowd going and left the fans excited than anything for RITA ORA, despite not knowing a heavy rain fall was about happen as soon as they left the stage. SIGMA played a range of well-known tracks adding their own beats to the songs from dance hits to their own songs including… ‘Nobody to Love’, ‘Changing’ and course their collaboration ‘Coming Home’ with one and only Rita Ora. Also getting the crowd going, SIGMA bought projector flames and jet cartridges which were used throughout their set. The duo definitely left the crowd in a good mood for RITA ORA who was up on stage next. As RITA ORA was due to take to the stage in front of thousands of Dundonian fans, a heavy downpour started, despite this Ora appeared on stage with her backing band and dancers as thousands of screams came from the audience. Ora stood on stage wearing a tartan top, leggings and a kilt, similar to her outfit which she worn at her Glasgow show back in May kicking off her ‘Girls Tour’. Within the first ten minutes of her set, Rita Ora won over the audience who were watching in heavy rain, she glided through two of her most celebrated singles, ‘Your Song’ and ‘Poison’, with an easy confidence these were these got the crowd in more excited mood for rest of her short set on stage. This continued when she played her number-one collaboration ‘I Will Never Let You Down’ with Calvin Harris before moving on newer material.

Ora’s set continued with a performance of the recognisable hit ‘Body on Me’, as well as her visceral new anthem ‘Soul Survivor’ which saw her abandon her more frilly elements of a top-flight pop songs, as she simply boasted her own exceptional vocal capacity and dancing finesse that makes her comparable more to the likes of her own Idols of Beyonce, Rihanna and Katy Perry.

As Ora continued her set, it was clear her connection with her fans was very important as she kept saying “It’s Good to be in Dundee, we hope you’re enjoying yourselves… we made it!” referring to travel problems Ora occurred traveling to Scotland from London earlier in the day and then onto the heavy rain was pouring down throughout her performance on stage.

Despite all of us You could tell Ora herself was really having fun and enjoying herself along with the audience, especially as she danced and sang to her new single ‘Girls’. It was this sense of genuineness, of real love and celebration, that raised Ora’s show from a simply perfect pop performance, to something a little bit more magic. As Ora ended her short performance on stage, she finished with her fan favourite ‘Anywhere’ which drawn close to the night and left fans leaving with high spirits on their faces with excitement at they got see their idol perform on stage.