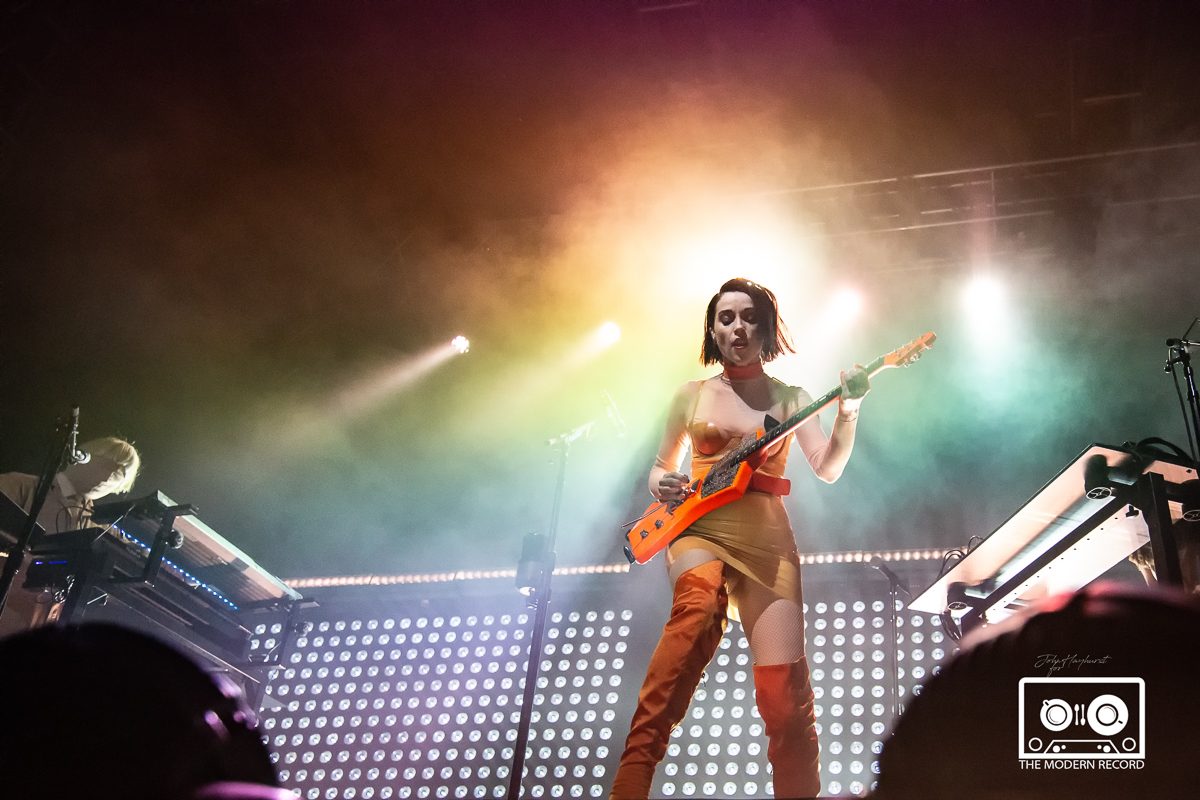 A new Prince has arrived, and she is female! 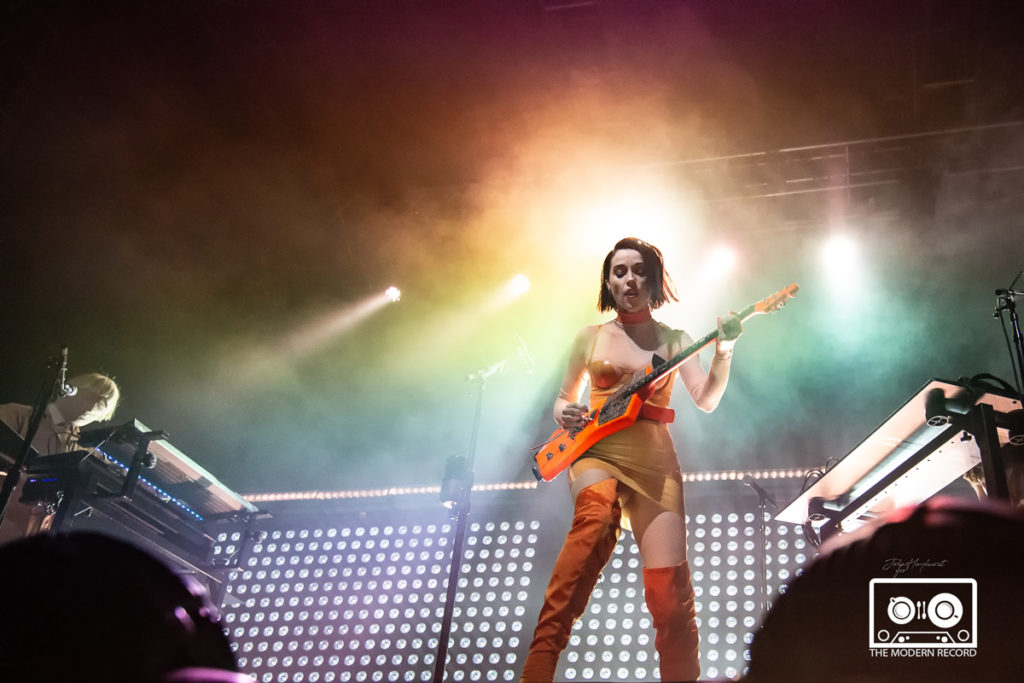 We need more St Vincents, that’s what I took from this gig in the heart of Yorkshire on a Monday night. More authentic original female musicians looking ever more powerful on these stages, rather than having the annual drab of karaoke wannabe celebrities on X-Factor, the dancing glam fake smiles of Strictly and the kangaroo cock eating championships in the Australian jungle. Get people of all ages off their arses and into concert halls and clubs to watch something creative, danceable and unmissable. Annie Clark delivered a powerhouse of an innovative performance and this audience lapped every second up – definitely worth missing Bake Off for.

Unfortunately, we had to endure a disco duo for an hour or so beforehand, these two ladies looked like a couple of mums with 2 hours of free babysitting playing CD’s of their youth whilst exhibiting the worst Mum dancing you’ve seen this side of an 80’s wedding. I wondered whether this was a deliberate attempt by St Vincent to say, “This is what we were – Now watch what we can be”. However, I really wish they had let Tallsaint support instead, a local Leeds band with a strong female singer in Louisa Osborn, who is probably the closest we have to Annie Clark right now. They would have been perfect for this audience – opportunity missed, and she was probably in the audience watching! 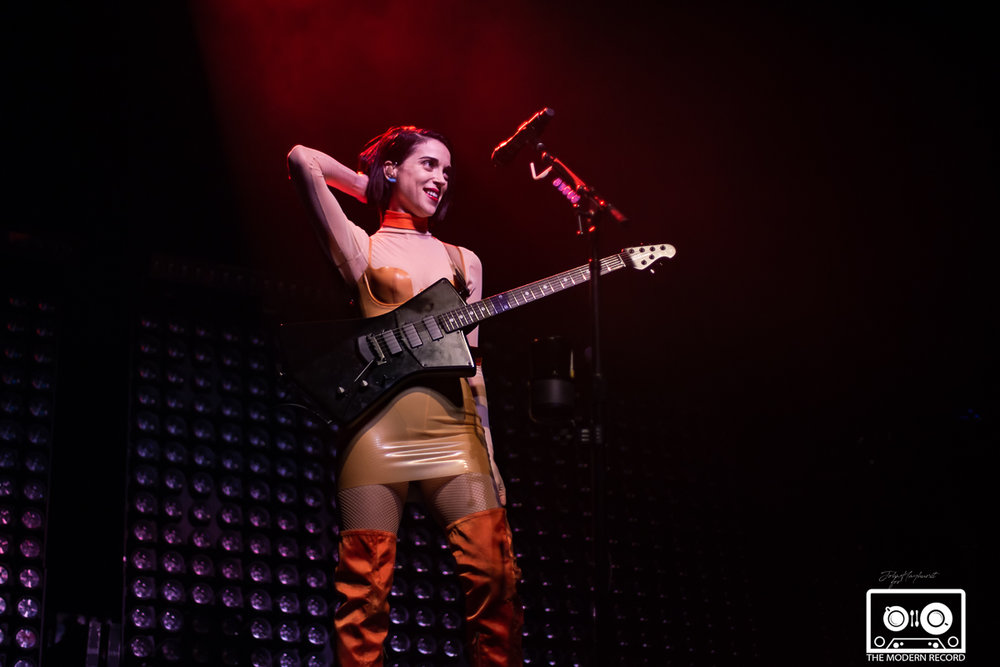 Annie is wearing the trademark thigh length boots and a skin coloured full bodysuit with knickers on the outside because she is superwoman after all. A sheer latex skirt and top covers just enough as her creation steps out from the darkness at the side with one hand raised in the air to the front of the stage. She doesn’t spend too much time near the front or talking in-between songs, preferring to be on a separate platform with her band.

Great to see a band as her last ‘Fear the Future’ tour was a one woman and backing tapes affair, which certainly divided her audience – this is the ‘I am a lot like you’ tour and she is promoting last year’s brilliant ‘Masseduction’ album by playing nearly every track off it. Toko Yasuda is with her on bass, synths and backing vocals, and then 2 facemasked blonde wig wearing blokes are helping with drums and more synths. The guitarwork is left to Annie of course as she is a master of her craft, not many female guitarists with their own custom-made guitars, she shows off several different coloured Ernie Ball Music Man versions and was eager to shred and pick out some up-tempo riffs to accompany what was a very tight and fiery performance from the others. 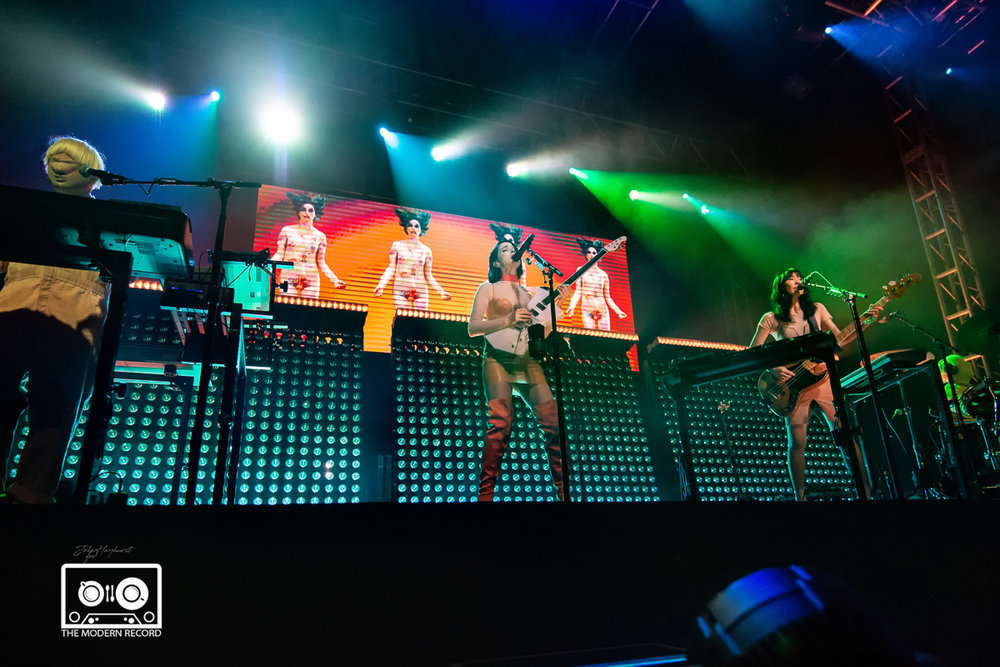 All of this with the dazzling lights and video production at the back of the stage made it feel like a big production and a sonically dynamic live spectacle. ‘Sugarboy’ kicking things off with heavy strobes and a backing that sounded like Donna Summer’s I feel love. The refrain “I am a lot like you” sets the tone for tonight and there is plenty of headshaking followed by the funky, dirty and fuzzy single ‘Los Ageless’ and then the album title track ‘Masseduction’ giving rise to some serious audience chanting “I can’t turn off what turns me on”. Such a great tune that could have been right out of Prince’s songbook and the guitarwork at the end of that track could have rivalled the purple one.

She trips from sultry to sexy to rock to vulnerable solo and back, and I can’t think of another female artist innovating and creating in this way right now, it’s brilliant and she should be on festival main stages and TV’s across the globe showing the masses how it’s done. Saving the slower tracks for the end of the show St Vincent complete the transition back to exposed solo star – for final encore ‘Prince Johnny’ Clark stands on stage alone.

Fair to say that Masseduction is the most commercial sounding record she has produced to date, but she remains largely a secret phenomenon only to those in the know, and that private club needs to substantially grow. We have lamented endlessly about losing Prince and Bowie within months of each other – well here we have a female prodigy who could be the next musical visionary, each track played tonight feels like the future, and much more so than dancing girl or boy groups on karaoke TV and radio – Get some St Vincent into your life and tell everyone else!