The Electric Lady brings her Dirty Computer tour to the North of England and it is Funking Fantastic! 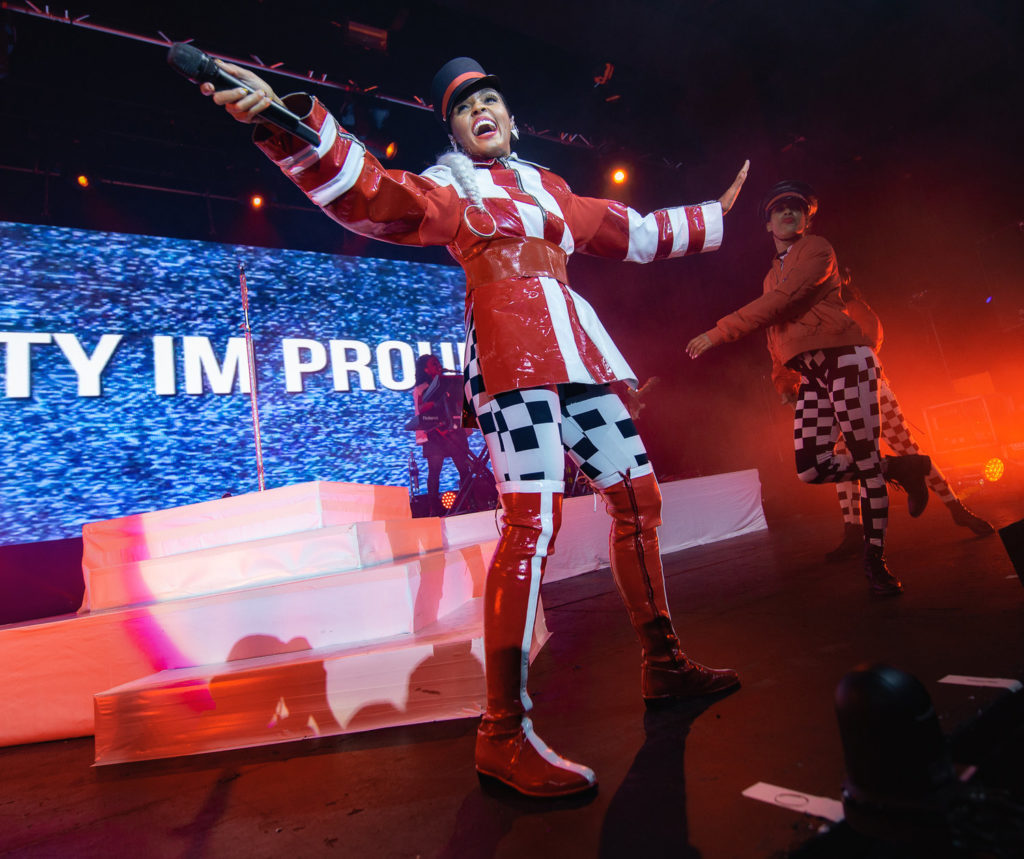 Prince would have approved of everything tonight, Janelle Monae stirred up the Manchester crowd on a dismal Monday evening and incorporated all the funk, glamour, risqué dancing and outfits that the purple one would probably have done himself if he was still around.

On its release the Dirty Computer album was accompanied with a short sci fi ‘emotion picture’ movie starring Monae – which you can watch here, and at the start of the live show a body on a table is wheeled out by 2 companions dressed in white, we assume the body is Monae as the character Jane57821 – but it can’t be confirmed as the thick dry ice covers the entire stage and front row while her backing band play the Dirty Computer intro (featuring Brian Wilson).

Monae then appears at the back of the stage on stacked white podium blocks looking pumped up in mirrored shades, a train guards hat and a bright red black and white glossy outfit, completed with shiny red& white boots. Behind her is a video screen showing clips of the movie whilst Monae and her dancers remain the main focal point throughout. 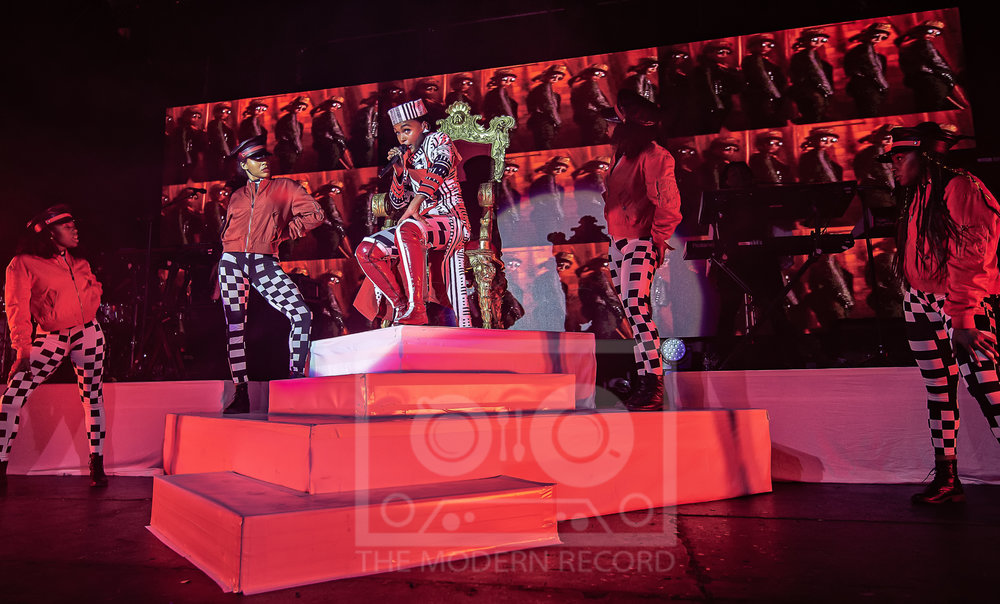 Opening track Crazy, Classic, Life is punchy and contains a bit of robotic dancing, but that’s about all the sci fi you’ll get tonight other than the backing dancers using water pistols on the audience. The first tracks are a mirror of the album – all the way through Take a Byte, Screwed, and then to Django Jane – where she takes her seat at a Q.U.E.E.N.’s throne.

Having 4 key dancers on stage with her means that she tends to stay on the white podium centre stage, and anytime venturing down the stairs or towards the front causes massive hysteric screams from the first few rows.

Her choreography is superb, singing crystal clear and the rhymes and rap are spat with some venom. Laying into haters and anyone that doesn’t recognize diverse culture is perhaps an old script but Monae adds some personal touches which seems to give it fresh life.

This sold out show is so much bigger than the venue limitations, and those attending here are getting a really special rare treat – as the UK “Tour” is sadly only tonight in Manchester and 2 shows in London at the Camden Roundhouse. 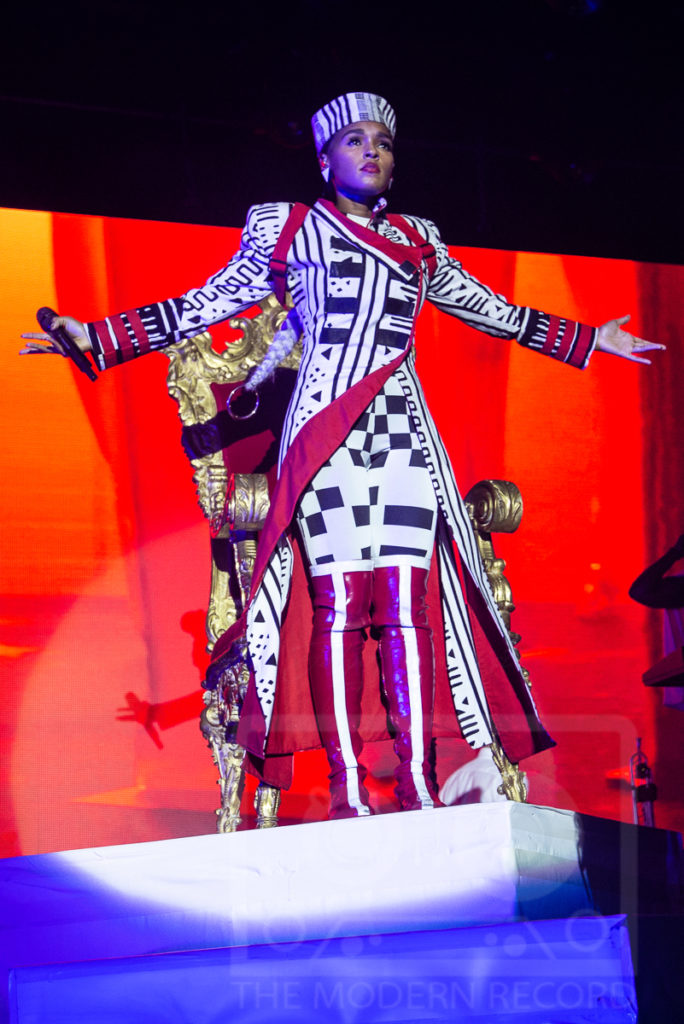 Dipping back into some older tunes like Q.U.E.E.N. produced some superb bass from her tight band and then some saucy twerks from her and the dancers. Personal favourite Electric Lady is next, and if that didn’t get you moving, well you would certainly be moved at the end of ballad Primetime, as suitable coloured lighting washed the room and the sound of Prince’s guitar solo from Purple Rain ended the track. This is probably as close as you can get to a female Prince show and I think both Monae and St.Vincent, who I saw only a couple of weeks ago, are leading the way as inspirational female musicians.

A costume change and the Raspberry Berets and Vagina pants are out for Pynk which prompts even more screaming from the crowd and accompanied spurious dancing. Yoga then produces the most sexual moves from the group “Baby bend over let your booty do the Yoga” lyrics give you all the information you need without a visual.  Janelle Monae is not someone to remain silent about world political or sexual agendas, her response to Trumps grabbing comment on I Got the Juice is that “this pussy grabs you back”.  She delights the audience by wishing them a ‘happy pride’ and throughout the show there are strong messages of love to everyone and how we should all celebrate being individuals even if that makes others feel uncomfortable. Climaxing hilariously during I Like That, when she commented on selected front row individuals singing “I like the way you wear that gold shit….I like your red shit…….I like that bald shit”. It was brilliant. 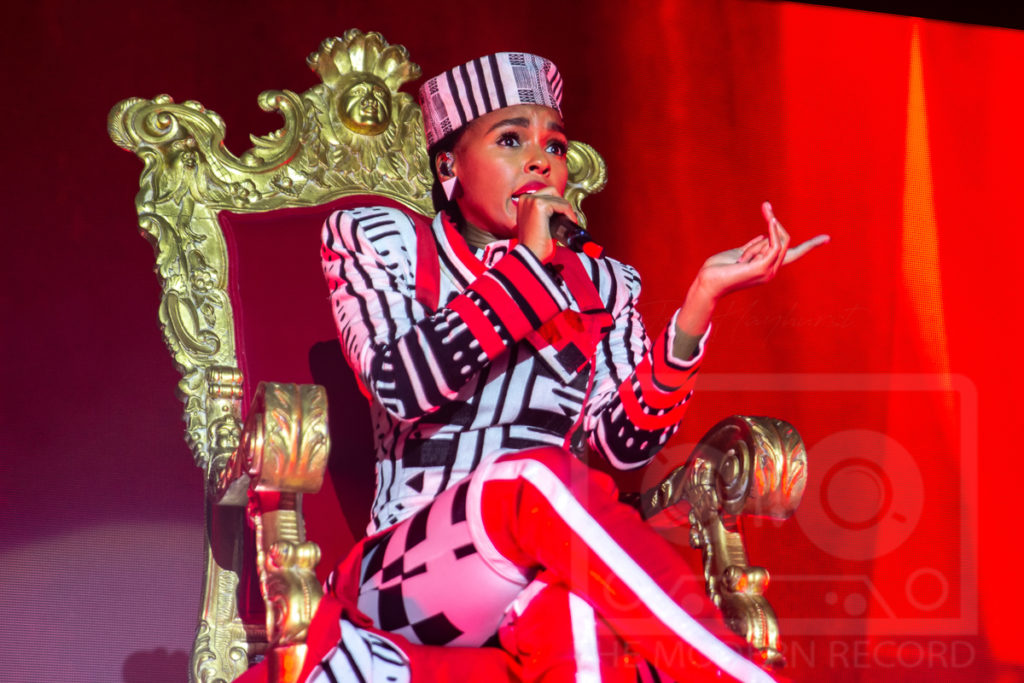 Looking a bit more Michael Jackson than Prince, Monae then dances silhouetted with a single spotlight behind to the opening synth of Make Me Feel. This Prince inspired tune is a highlight of the night as her dancing is punctuated with a tight brass sound accompanying the synth and clicked fingers beat. Funky and infectious the whole room is dancing, she even drags a few up on stage during I Got the Juice to see if they have any.

The high tempo James Brown razzmatazz of Tightrope sees us through to the encore which is a first for this tour as Come Alive (The War of the Roses) gets its 1st live airing rather than Americans, which is the track she has been playing last elsewhere. It’s not clear why she took Americans off the setlist in England, as she has been playing it all over Europe, I’m blaming Brexit.

This was a big performance from start to finish from an inspirational female who sings and raps about inclusiveness and diversity, it should really be shown at Arena sized venues, but for some bizarre reason this Kansas superstar hasn’t found that step up into the more UK mainstream just yet. It was a good 4 years since she last played on UK soil – best not leave it that long again. Pure funk and sexiness no one does it better than Janelle Monae.