SIMPLE MINDS, THE PRETENDERS & KT. TUNSTALL AS PART OF THE ‘GRANDSLAM’ EVENT KICK OFF THE WEEK’S CELEBRATIONS FOR DUNDEE’S OPENING OF THE V&A MUSEUM AT SLESSOR GARDEN’S. 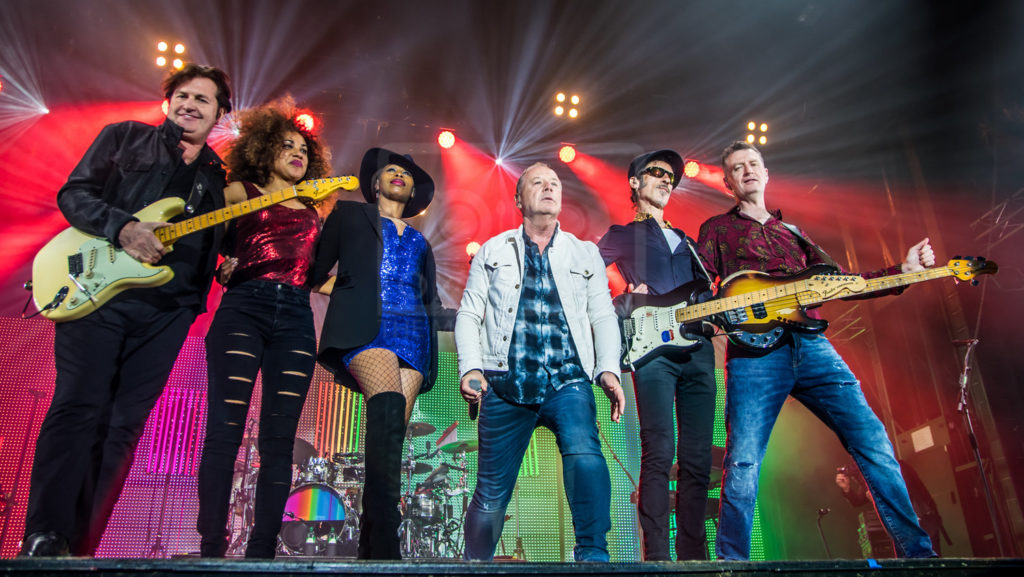 Sunday saw the next instalment of summer gigs in the newly constructed Slessor Gardens area of the city, this time it was the ‘Grandslam’ event, the mighty Simple Minds supported by ex-wife Chrissie Hynde and her band The Pretenders.

First on the bill tho was local (‘ish) lass KT Tunstall who entertained us with her between songs patter, her obvious musical talent and her electronic mixer, which gave depth and substance to the music, a clever piece of equipment.  Her set-list included classics such as Other Side Of The World, Suddenly I See and covers of The Bangles track Walk Like An Egyptian and I Wont Back Down, sung as a tribute to Tom Petty.  She warmed the crowd up nicely for those waiting to see the second on the bill for tonight’s ‘Grandslam’ event. 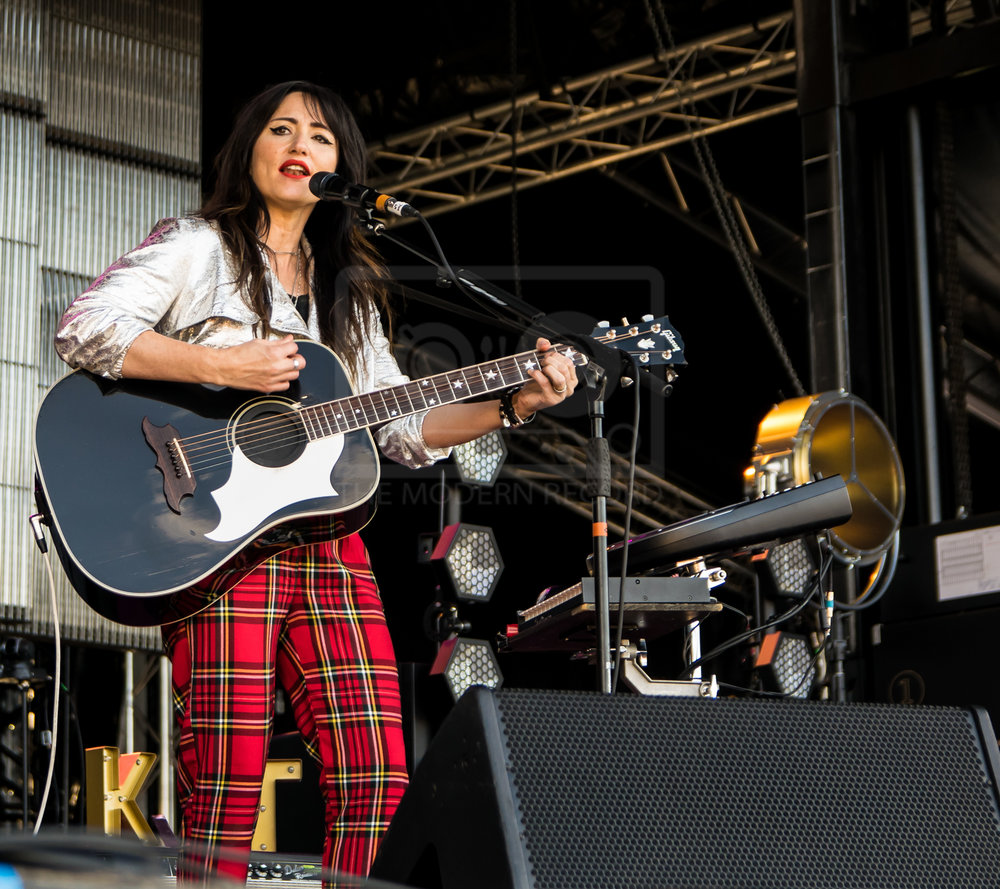 The Pretenders were formed in 1978 in London and were fairly successful as a singles band in the UK chart from the early to mid 80s.  Tonights line up included original members Chrissie Hynde and drummer Martin Chambers, and wowed the crowd from the first beat of the first note.  Songs from their back catalogue, brought back to live and not sounding a bit out touch, Hynde and the band belted thru classics including Message of Love, Kid, Ill Stand By You and closed with Brass In Pocket, their 1980 number one, and joined on stage by a member of the audience who gave Hynde a run for her money in the vocals dept!!  A truly great set by the band, covering all the mega hits. 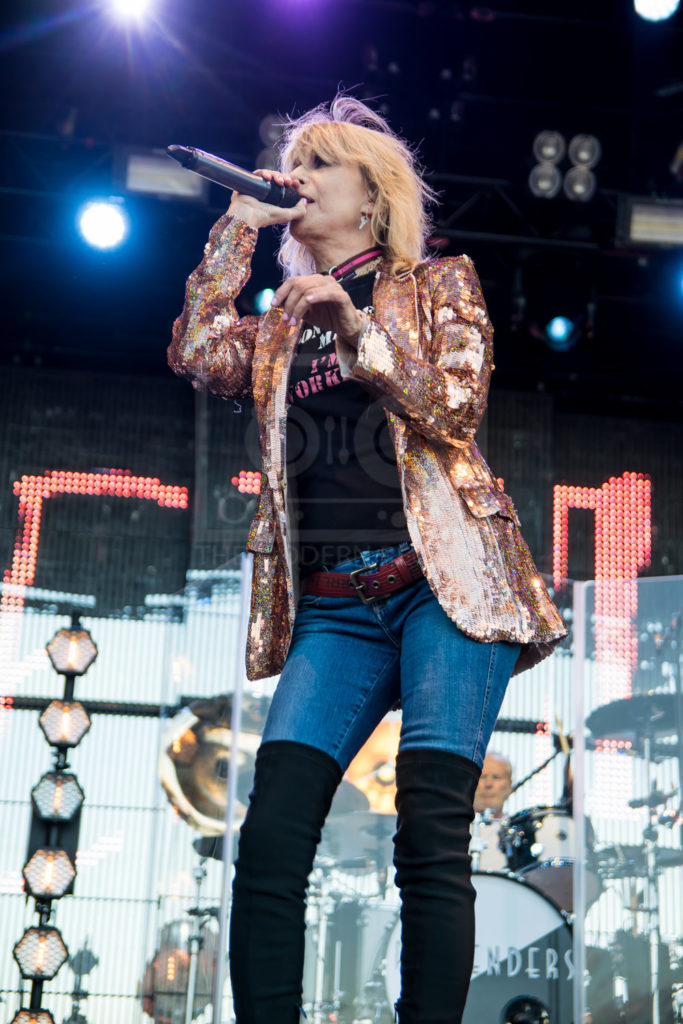 And onto the main act of the evening, Simple Minds.  Now in their 41st year of touring as a band, Simple Minds have constantly hit the heights of the UK charts for over 3 decades and the line-up has seen many changes in that time.  The current version of Simple Minds includes original members Jim Kerr on vocals and Charlie Burchill on guitar and keyboards, and tonight they are joined on stage by Ged Grimes on bass, Sarah Brown on backing vocals, Gordy Goudie on guitar and Cherisse Osei replacing Mel Gaynor on drums.   No signs of recent recruit Catherine AD on vocals and keyboards this evening.

Tonight’s set list was a general ‘best of’, although for a band who has the back catalogue of Simple Minds, that ‘best of’ could easily have been doubled with the band playing twice as long, and who would have complained?  Opening tonight’s show with The Signal And The Noise from recent album release Walk Between Worlds, the big hitters followed on.  Waterfront, Love Song, Let There Be Love and Promised You A Miracle with the band joined on stage with KT Tunstall, who had previously collaborated on the recent album simply entitled ‘Acoustic’.

The American, Shes a river, Someone Somewhere in the Summertime, All the Things She Said, the hits kept coming and the crowd were loving every minute, even the cold blustery wind coming from the Tay couldn’t put a dampener on the evening.  The first part of the set closed with the anthem Don’t You Forget About Me.  After a short break, they band returned to the stage for the encore, opening with a cover of The Call track Let The Day Begin, before climaxing with a couple of huge hits from the Once Upon A Time album, Alive And Kicking and Sanctify Yourself.

The recent series of concerts at Slessor Gardens in Dundee has gone down a storm.  As one local remarked on Sunday ‘its great having a chance to see the big names without having to travel to Glasgow or Edinburgh all the time’, and rightfully so.  The nearby Caird Hall is a great venue, but I believe over the next few years Slessor Gardens has been earmarked for more big names like they have had recently, and if the shows are of the standard of Sunday, with KT Tunstall, The Pretenders and Simple Minds then the locals are in for a treat.  All today’s artists were on top form, a fabulous days entertainment that even the unpredictable Scottish weather couldn’t spoil.