NICKI MINAJ RODE (QUITE LITERALLY) INTO TOWN ON HER WHITE WINGED HORSE ON THE LAST LEG OF HER 4 UK GIGS AS PART OF HER ‘QUEEN EXPERIENCE’ NICKI WRLD TOUR FOLLOWING THE RELEASE OF THE ‘QUEEN’ ALBUM RELEASED LAST YEAR, AND THE BUSY MANCHESTER ARENA LOVED EVERY SINGLE AND SLIGHTLY NUTS MINUTE OF IT. 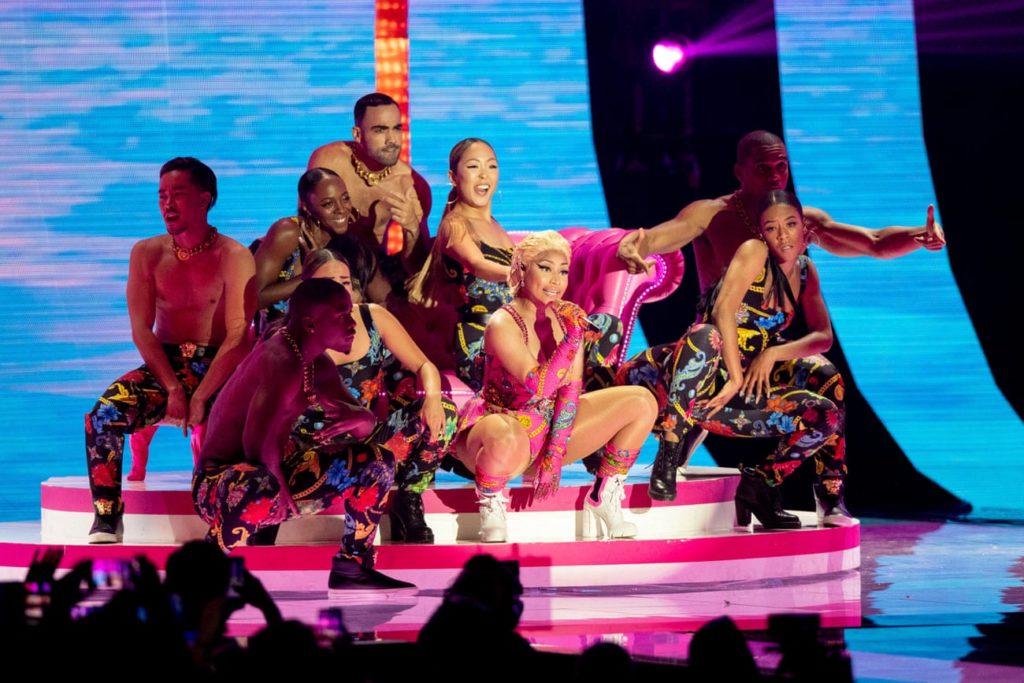 Nicki Minaj rode (quite literally) into town on her white winged horse on the last leg of her 4 UK gigs as part of her ‘Queen Experience’ Nicki Wrld Tour following the release of the ‘Queen’ album released last year, and the busy Manchester arena loved every single and slightly nuts minute of it.

First up was Nigerian born RAY BLK who won the BBC’s sound of 2017 award and based on tonight’s short set deservedly so. Her brand of DJ backed soulful R&B was a genuine treat to hear, with ‘Run Run’ & ‘My Hood’ being perfect examples, and I will certainly look out for her at a smaller venue to catch a full set.

Unusually this gig had 2 support acts and second up was 20 year old rapper Jarad Higgins, aka Juice WRLD who has been receiving widespread critical acclaim for the release of his 2 albums ‘Goodbye & Good Riddance’ and ‘Death Race For Love’ over the last year. Backed by a DJ and extremely capable band this was a 30 minute set of subsonic bass, call and response and Juice enquiring how many of the audience were ‘high.

Apparently he was…. and that might explain why the felt compelled to take off his trainers, and drag his girlfriend on stage for a dance. Get past all the veneer and he clearly is a talented artist, check out ‘Lucid Dreams’ based on Stings ‘Shape of my Heart’ and ‘Fast’ with its sparse back beat that showcases his real talent and not only can the rap, he genuinely has a good singing voice.

And so it was then onto the main course…..

There has literally been miles of column inches written about Nicki Minaj, the self-proclaimed Queen of Hip Hop, not all of it very complimentary either, and this current tour hasn’t been without controversy either. Cancelled dates and alleged poor ticket sales have been mentioned, but thankfully tonight wasn’t cancelled and whilst the arena wasn’t a complete sell out, it wasn’t far off.

This colossal set didn’t get off to the greatest of starts as she finally turned up onstage 30 minutes late, (more about this later) but the crowd didn’t seem to mind in the least and sat astride a white winged horse (no really!) she went straight into ‘Hard White’ from her ‘Queen’ album. I was particularly impressed with the crowd who knew all the lyrics from the off. It would be fair to say that Nicki Minaj is not an act for the easily offended, and ‘Feeling Myself’ and ‘Only’ which invited people to ‘eat her ass like a cupcake’ whilst surrounded by wildly gyrating dancers certainly provided a dilemma for the parents who were there with their kids!

20 minutes into the set she engaged with the audience and of course, as it was Nicki Minaj amongst the chatter she asked that the owners of large penises within the audience make some noise! After that for some bizarre reason she decided to try out her English accent and asked if everyone thought she sounded like a Manc. The answer to that from the crowd was a resounding NO, it sounded like a really bad Dick Van Dyke effort and frankly her management really need to get her to drop this bit. Apparently it was just as bad at the shows in London.

Then it was the first of several costume changes, and during this a DJ appeared on a riser and implored the crowd to raise their hands in the air and PARTY!!! Nicki Minaj then re-appeared in a tracksuit next to the DJ who proceeded to play short segments of some of her tunes, with Nicki Minaj playing the role of the audience making DJ requests. This I must confess I found slightly irritating as there wasn’t one track played in full for about 15 minutes.

However I was impressed with the way later in this segment she gave the floor to other new and established rappers and Lady Leshurr, Stylo G, Lisa Mercedez and Ms Banks took to the stage to showcase their skills.

Cue another costume change and it was straight into ‘Bust Down Barbiana’ and the trappy ‘Letting Go (Dutty Love)’. Huge global hit ‘Starships’ had the entire arena bouncing along and this was quickly followed by the EDM flavoured David Guetta cover ‘Where them Girls At’.

Yet another change of kit and things slowed down a little at this point with ‘All Things Go’ and ‘Save Me’ with its insistent drum and bass backbeat which highlighted her genuinely decent singing voice. ‘Right Thru Me’ and the outstanding ballad ‘Grand Piano’ were other high points of this part of the show.

A nice touch was her taking time to honour the poor souls who lost their lives in the Manchester Arena bombing and the sight of the Arena lit up with phone lights was a genuinely moving spectacle.

The pace was then picked up with the Jason Derulo collaboration ‘Swalla’ and ‘Side To Side’ which was a joint effort with Ariana Grande. This mammoth set was then brought to a deafening close with ‘Super Bass’ and with that she was gone…..

The crowd absolutely loved this set from start to finish and it’s easy to see why she is so hugely popular. Her astute choice of artists to collaborate with, along with her carefully cultivated onstage and public persona and actually having talent in bucket loads ensures that she’s a big draw wherever she plays. There was certainly little evidence of poor ticket sales at the gig I attended.

I do have one gripe though and I think it’s a point worth making.

Arriving on stage over 30 minutes late frankly isn’t fair to the audience who have paid a lot of money to attend this gig, and probably spent many months looking forward to it. I saw loads of people having to leave before the end for last trains and buses and I know they weren’t happy about it!

Nicki Minaj is a unique and talented artist, although not for the faint hearted, and her show whilst being slightly mad, makes for great entertainment and I thoroughly enjoyed it.

Just needs someone from her management team buy her a watch!!

THE JAPANESE HOUSE // THE CAVES, EDINBURGH