KRISTIN HERSH: LIVE AND UNCUT IN THE DISSECTION ROOM. 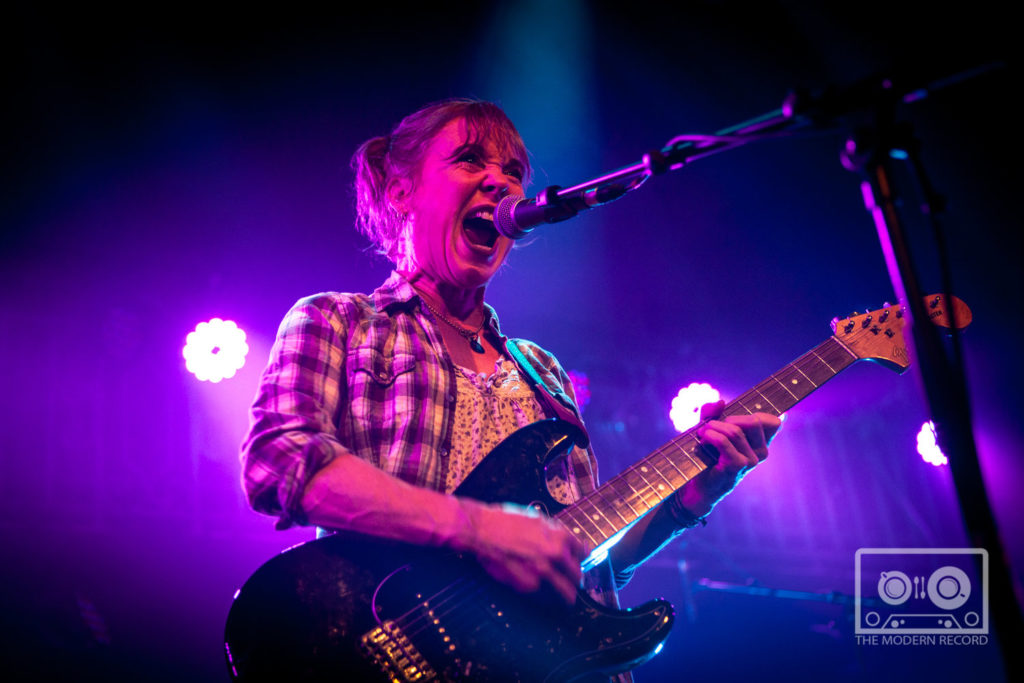 Kristin Hersh returned to Scotland this week for three dates in her Live and Loud tour, following on from the launch, late last year, of Possible Dust Clouds, a strikingly raw and powerful album that takes her music back to its more grungy roots. This evening’s gig is in the intimate and aptly named Dissection Room of Summerhall, an eclectic cultural centre in Edinburgh, and home to The Royal (Dick) School of Veterinary Studies until 2011.

The evening starts out with Glasgow singer-songwriter Beerjacket, aka Peter Kelly, whose subconscious method of songwriting draws similarities to the approach of Hersh. Perched on a stool, this emerging talent’s acoustic set enlightens the audience to his enchanting collection of alt-folk gems.

Next up is the first of two appearances by Fred Abong, former bass player for Throwing Muses, and Belly, on their first album, Star.

Abong gives a timid wave as he takes to the stage, a hair’s breadth from the audience. A bit of a music veteran, he played drums and bass in Rhode Island’s hardcore punk scene during the ‘80s before hooking up with the Muses and Belly. Subsequently taking a detour away from the ‘industry’ to concentrate on his own music, and, for the majority of this decade he has absconded even that to a world of academia, completing a Ph.D. in Humanities, which echoes in his philosophical lyrics. 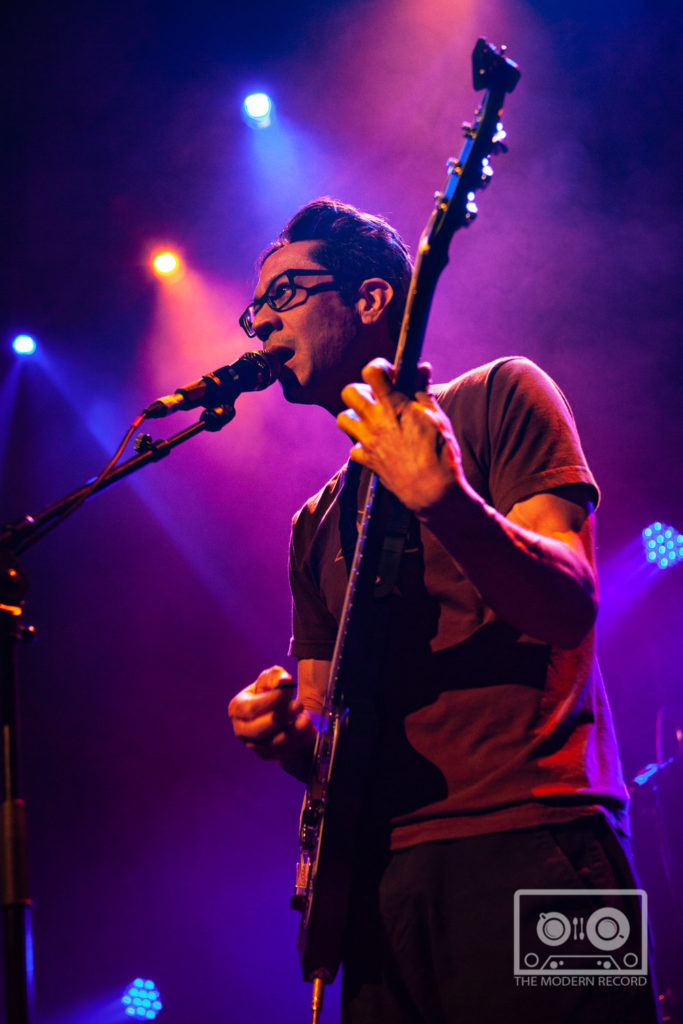 Accompanied by only guitars, his deep, raspy vocals and Pavement-esque chords defy what might be expected from such a remarkably fresh-faced musician.The powerful and entrancing Firefly, from his latest EP, Pulsing, which was released earlier this month, sets the scene.

Half way through the set he switches to acoustic, with more new tracks including Footprint and title track, Pulsing. Abong’s music has been described as a cross between ‘ragged Replacements and lyric-driven Bob Dylan,’ and as ‘Elliott Smith with balls’. For me, his vocals on these numbers are reminiscent of Eels’ Mark Oliver Everett. But whoever he reminds you off, he’s pretty underrated. Go, take a listen.

Ten minutes later and Kristin Hersh strides across the stage, followed by Abong, this time on bass, and drummer Rob ‘Moose’ Ahlers, Hersh’s former bandmate from 50 Foot Wave. And there she goes, straight on the warpath as her amp fails her: “Anyone here know how to work electricity?” The sniggering audience have already warmed to her, and after a bit of head-torched, cable manipulation, she’s on. 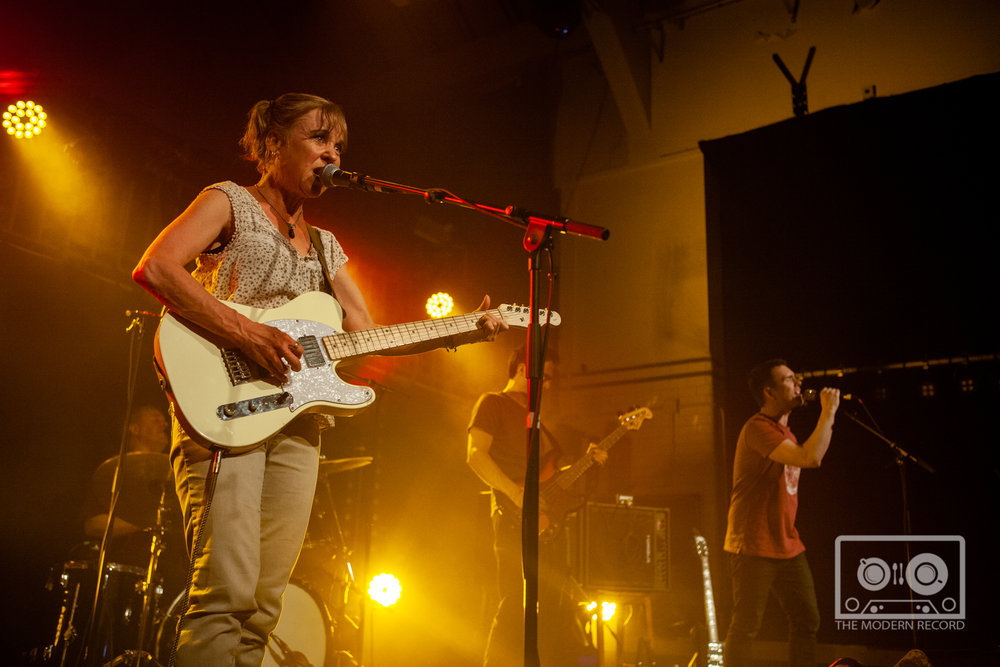 First up is the gutsy LAX, from the new album. The glorious and pounding baseline accompanies Hersh’s dark and guttural vocals as her fingertips slide violently up and down her Strat, before those piercing blue eyes stare into the unknown, well beyond any physical feature of the Dissection Room.

When she first toured with the Throwing Muses in her teens, she’d remove her contact lenses so she couldn’t see the audience, a sort of shyness coping mechanism. I’m pretty certain she can see fine tonight, but her trademark trance no doubt does the same job. Meanwhile Ahlers drifts into his own reverie, his backing vocals complimenting Hersh’s husky tones.

Next up is No Shade in Shadow, the hypnotically melodic first single off Possible Dust Clouds, flanked with distortion and frenzied feedback. Divine!

After the Throwing Muses’ Sunray Venus, Hersh blasts into to the rollicking current single, Loud Mouth, her vocals and countenance flipping from child-like innocence to conniving menace in seconds as her head bobs disconcertingly in defiance.

The beguiling Your Ghost, off her 1994 debut solo album, Hips and Makers, is an audience favourite. Tonight, young Beerkjacket covers Michael Stipe’s vocals beautifully, Hersh giving him a reassuring nod as he eyes her for approval. Afterwards she comments, “So…they used to dissect dead animals in here? It’s a bit like playing in an empty Indian burial ground.” And as she launches into Husk, from 1999’s Sky Motel, I wonder if she’s spotted a phantom fox floating through the fog of dry ice, before she disappears once more into her impenetrable sanctuary straight ahead.

Crooked is next up, the title single off the 2010 album which is being reissued in orange vinyl for Record Store Day. She muses “I think the lights are haunted as well”, and it has to be said, a venue with such history suits a quirky performer like Hersh to a T, adding to the atmosphere which the trio are already creating in abundance.

I love the way her sweet smile melts into a wicked grin, and wonder what’s going on in her head. Halfway Home, another new track, hits on this, “A nasal voice in the background…get away from me, get the hell away…”, a reminder that after an accident in her early teens, Hersh did indeed hear voices, new songs in fact, complete with colour coded chords, the results of which fans have been embracing for years.

A quick encore ends the show, with a weary Abong switching this time to drums, as Aherns picks up the bass and Hersh attacks her guitar with a screwdriver for the 50 Foot Wave number, Broke, a bruiser of a track to end an evening of deliciously rich music and creative talent.