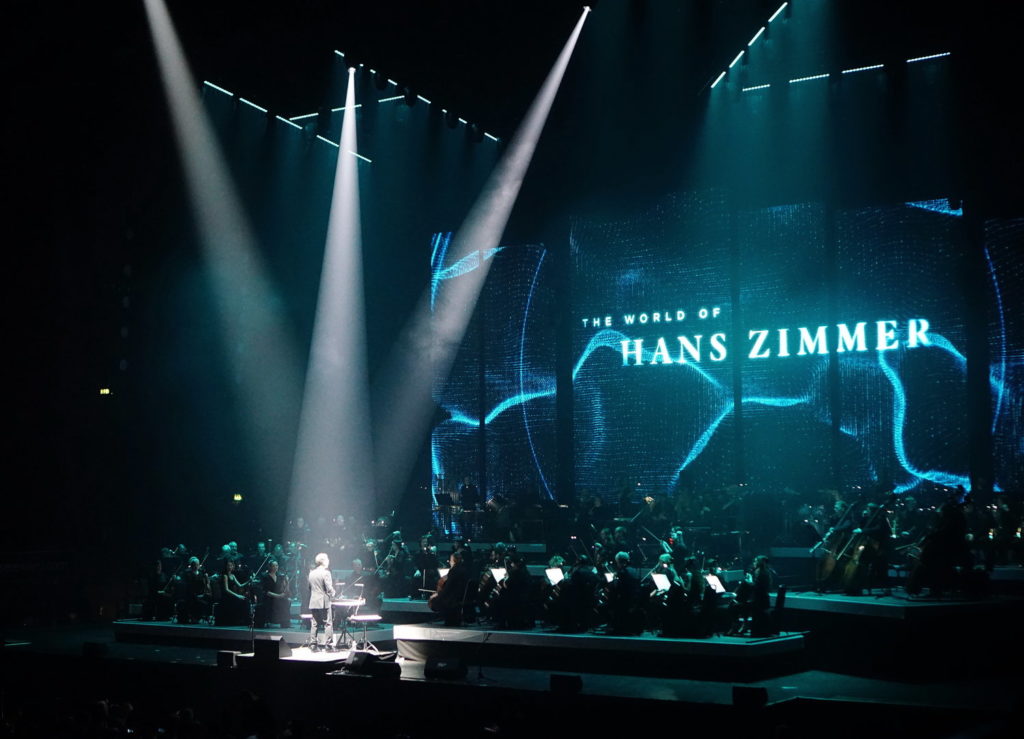 As the light starts to dim walking up to The Wembley arena, a stage that has graced many Artists before, you tend to ponder on the film scores and musical influences of Hans Zimmer. The whole area being an imposing urban architectural skyline made out of concrete and glass, resembling a futuristic film set rife for a musical piece to be written about!

Zimmer himself proclaims, he did not want to be a composer to interpret the music of others but ‘make his own! ’

German born, Hans Zimmer as a young boy attended his first orchestra performance at the age of 3 years old and he fell in love with the likes of seeing Bach and the power of sound and harmony the musical instrument players create.

Hans Zimmer creates some of the most complex musical compositions and he is one of the sought after composers in Hollywood. He has written some the most memorable orchestral scores that has altered the history in the way music is composed for films. Most memorable ones as being the likes of ‘Gladiator’, ‘Inception’ and ‘The Lion King’. His musical origins are from a Rock and Roll band and he still does most of his work on synthesisers in a small studio. 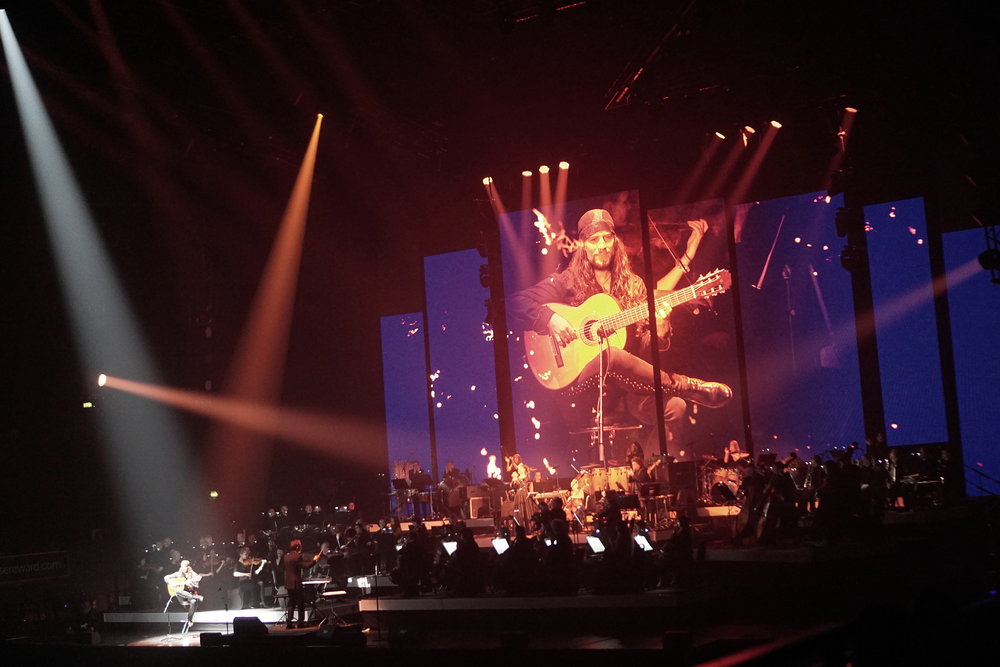 With anticipation, the crowds settle down for the night, when conductors Gavin Greenaway Baton is raised. He has been collaborating with Hans Zimmer for the past 25 years, stoles on stage, to welcome everyone to Wembley. Zimmer is displayed on the scene behind the orchestra, explaining his musical influences and story behind his latest stage project to bring his music to the people and he would never only do serious projects, “as composers are like children!”

The drums start to pound, which is felt tingling right through one’s body, to  announce a complete new version, with the immersive  lightshow to accompany the start of ’The Dark Night’ Score. The scene is set and works really well with getting ones imagination flowing to the actual dramatically created film scenes this score would have been taken from.

Joining on stage for the next act ‘Mission impossible II’, is Lisa Gerrard, with the most imaginable powerful voice and a solo guitar peace from Amir John Haddad.

The audience’s ears are graced with the triumphant battle theme from ‘King Arthur’ as well as the emotionally high ‘Da Vinci Code,’ the build-up is incredible and stylised.

The choir is revealed at the side of the large scene following the next acts and the time rapidly progresses with real variety too. The scene acts as a visual aid to the likes of the clouds and aircraft attack scenes of ‘Pearl Harbour’ fighting battles of ‘Pirates of the Caribbean’ and the fun animations of ‘Kung Fu Panda’, whom The audience loved by giving a big cheer and applause. 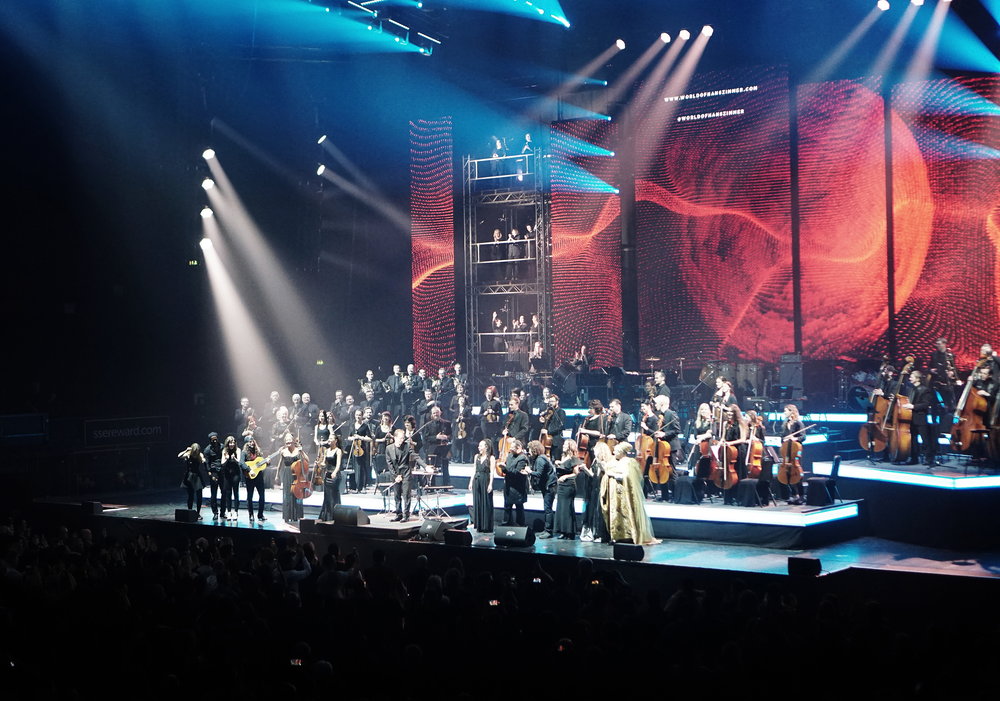 I do admire the style of persecution evident in dramatically tense ‘Gladiator,’ from Lucy Landymore as she has toured around with Hans Zimmer and you can see why she is in great demand in the UK for her expertise. Ones heart can be felt pounding with the drums with ‘Rush, Nikki Lauder speeding through the most dangerous Nurnburgring race in a torrential downpour.

As the night progresses light heartedly with ‘Madagascar’ into the second Act, and the likes of academy award winning ‘The Lion King’, the 12,000 audience was delighted with the symphonic extravaganza with the masterful set pieces right through to the introduction of the orchestral members and into the encore the crowd cheering, wanting for more, conductor Gavin Greenaway announces ‘Is there time for one more?’

The evening brought together all generations in a common appreciation of the music compositions with detail and depth required for they cinematic experiences and it does have a powerful emotional impact. One comes away feeling the sense of accomplishment from Hans Zimmer and actually wanting to see the movies once again to listen to the theatrical compositions that perfectly creates the scene!