PANIC! AT THE DISCO KICK OFF THEIR UK ARENA TOUR BY DELIGHTING FANS TO AN STUNNING LIGHT SHOW PERFORMANCE. 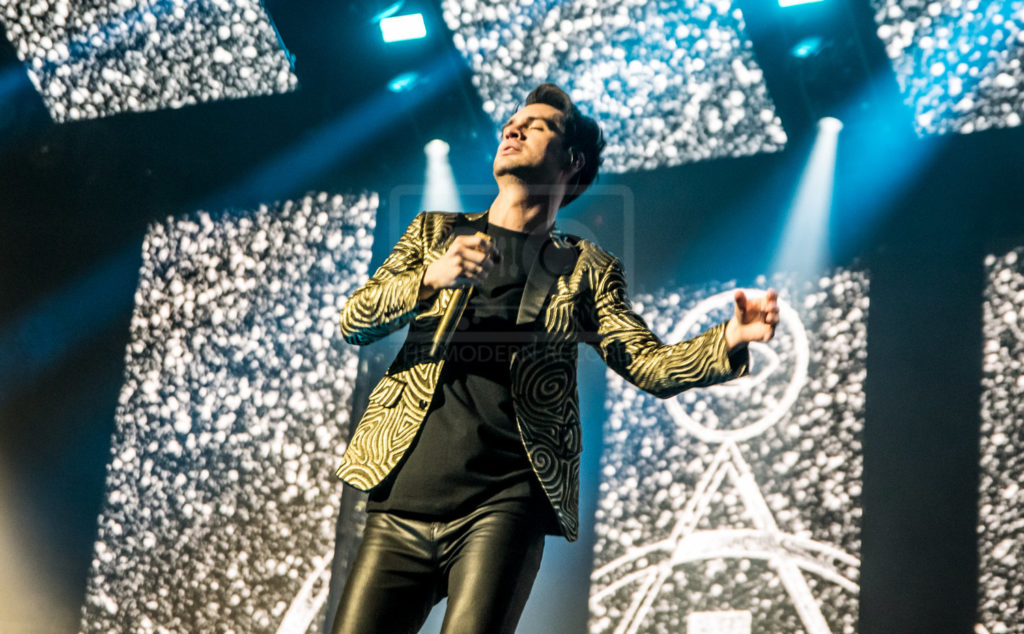 Since arriving on the scene in theatrical style in 2005, Panic! at the Disco have never failed to be polemical, their music and aesthetic creating a widespread divide in opinion. The cathartic yet juvenile debut “A Fever You Can’t Sweat Out” made the then teen emo phenomenon a band people loved to hate, and in many cases hated to love. However, 14 years and 6 albums later Panic! at the Disco has survived as the moniker for Brendan Urie’s pop star reinvention (at still only 31). A well-designed development and sonic update has pushed Urie to new heights with new album ‘Pray for the Wicked’ which has allowed Panic! to put on a different kind of pop show and sell out their first ever UK arena tour, starting at Glasgow’s SSE Hydro.

Sparing no expense on production costs, Urie and his expansive backing band (featuring string and brass sections) arrived on stage from below, with risers coming up from beneath the stage to the bombardment of lights, video screens and lasers. Sporting a gold microphone and glittery blazer, the frontman shot along an extensive walkway to the electro-pop sounds of new single ‘(Fuck a) Silver Lining’. What has caused furthermore divide with Panic! is what some may see as an abandonment of their (pop) punk roots and influence. This always raises questions of authenticity and solid values. However, by committing to a pop reinvention, all the glitz, glamour, dancing, playback and over the top theatrics don’t seem out of place. Urie doesn’t seem to care anymore about an inherently problematic authentic punk rock attitude and this works out for the better. Because of this it seems there is little space in the set for more than a couple of old favourites such as 2007s ‘Nine in the Afternoon’ and the omnipresent edgy teen anthem ‘I Write Sins Not Tragedies’. A full commitment to the pop aesthetic provided coherency to the show and was well suited to the arena stage. Urie’s pedantic dancing, highly impressive vocal range and charming personality made it hard to believe that he had not always been selling out arenas as a pop star. It takes confidence to be able to pull off doing backflips and playing a levitating (on wires) grand piano. Confetti shot out of the stage at multiple points in the set as well whilst pyrotechnics accompanied some of the darker numbers such as ‘Miss Jackson’ from ‘Too Rare to Live…’. Urie spent time greeting crowd members during the eponymous ‘Death of a Bachelor’, sporting an unfading smile as if he was in disbelief that he himself was on stage at an arena with Panic! at the Disco. (a look which he endearingly had for most of the set). 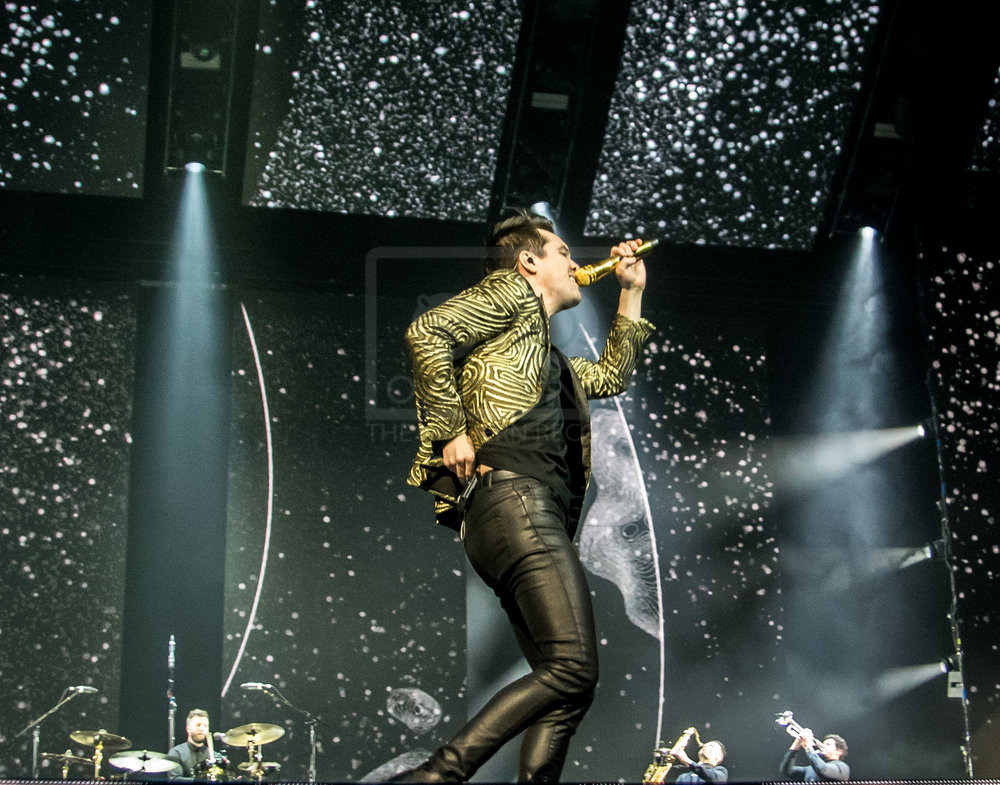 The song arrangements worked well with interludes being used for set changes and set up time on stage to great effect and giving the performance a great sense of flow. The show never came to a grinding halt between songs despite reasonable gaps enabling Urie to go off (under the) stage and reappear somewhere else for the next number. The set featured songs from their new LP extensively including ‘High Hopes’, ‘Hey Look Ma, I Made It’ and ‘Say Amen (Saturday Night)’. Much off the rest of the show was comprised of solo era Panic! songs from ‘Death of a Bachelor’ including Vegas Lights, Casual Affair and Girls/Girls/Boys. (The performance had a  pro-LGBT message which saw Urie wearing a rainbow flag surrounded by multi-coloured lasers, providing depth to the performance). The band even ambitiously tackled a faithful cover or Queen’s ‘Bohemian Rhapsody’, a spectacle for some and blashphemy for others (although the frontman definitely had the vocal ability to pull it off.).

Urie’s debut venture to the UK with Panic! at the Disco in 2006 saw him being knocked unconscious 1 song into the set by one of the many bottles thrown at the band by from the audience. After he came to after two minutes, the front man famously got back up and continued to the set to completion. For all the divided opinion, Brendon Urie has managed to persevere and withstand backlash whilst successfully managing to achieve the difficult rock band to pop star conversion which many other acts have done (arguably) much less favourably (Maroon 5 and Fall Out Boy to maybe name a few). In 2019, Urie still doesn’t care what you think and performs his pop music with extreme conviction, a quality which is hard not to respect regardless of what your opinion of ‘Panic! at the Disco’ may be. 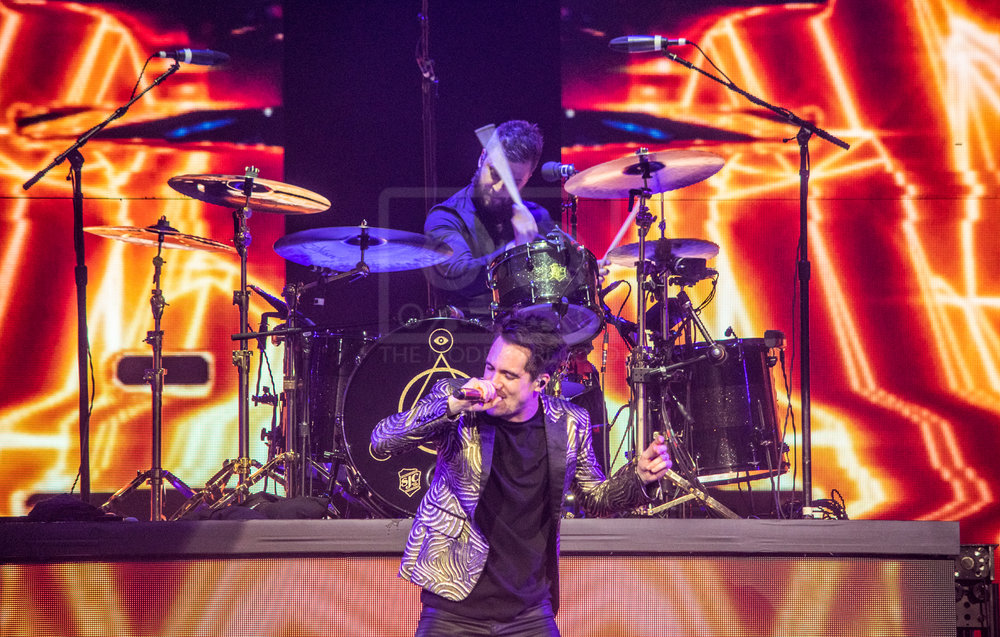