YAK HAD THE WHOLE CROWD EATING OUT OF THE PALMS OF THEIR HANDS WITH A FIERCE ALTERNATIVE ROCK SET FILLED WITH PUNKY REBELLION AND UNDENIABLE PASSION. 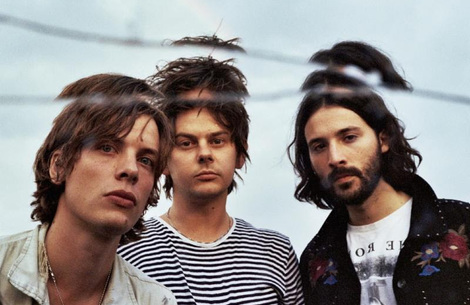 Yak started their stampede in 2014 and were on a mission to prove they came out to play hard. Their tracks are pace-fuelled storms of intensity but they’ve got knack for the occasional, softer, float-away melodies too. In the years following, the group toured hard, crowning with Glastonbury festival and a sell-out headline show in London. They supported the likes of King Gizzard & the Lizard Wizard and Alex Turner supergroup The Last Shadow Puppets. The band also released their first album Alas Salvation while working we the ex-Pulp bassist Steve Mackey. It was in the latter half of 2017 that quartet settled on the line-up that we see today with a new bassist joining the heard. Flash to February 2019 and these Staffordshire agitators have release their second album Pursuit of Momentary Happiness and are touring it up and down the UK and Europe.

At the unassuming, iconic venue King Tut’s Wah Wah Hut, Yak’s first support was Bear Fabric. The Edinburgh based group put on a slick performance but they don’t come across relaxed. There was a sense that they were holding something back, be it due to stage-fright or inexperience, these lad need to shake their paranoia to match their boppy-indie rock sound. With a bit of loosening up and enjoyment, their sets will tear it up.

Next to take to the stage was Leeds punk outfit Mush. Daniel Hyndman, frontman, does spectacular job. His vocal wailing is one that is perfect for their classic, simplistic bass hooks and melting electric guitar. Their tracks feature around a harsh look at modern society and how the human condition is changing.

And it was then the golden moment of Yak’s performance. The band is fronted by Oliver Henry Burslem, who opens up singing into a megaphone taped up to a mike. He used this hybrid mike a few times throughout the set and it was amazing just how pronounced and impacting it caused his vocals to become. His words became like orders causing the full room of fans to be driven to almost stand at attention and listening intently. They opened with the older track ‘Heavens Above,’ and then played ‘White Male Carnivore,’ and ‘Layin it on the Line’ from the new album.

Their hard sound is much more intense than it is in any studio recording. Their uninhibited in there conviction to the sound, Burslem goes in and out of a possession-like state, throwing his head back and rolling his eyes to the back of their sockets.

The slower, softer, psychedelic rock track ‘Pursuit of Momentary Happiness’ is played wonderfully and perfectly followed by the soft ‘Words Fail Me.’ Live versions of both tracks are definitely ones that I prefer, showing the band’s surprising genuine ability to deliver heart-filled tenderness that is not forced upon them by some producer with pound signs in their eyes.

But everyone wanted to hear Yak play the stomping, tumultuous sound that they have smashed in to this modern market. Tracks like ‘Use Sombody,’ ‘Harbour the Feeling,’ and ‘Blinded by the Lies’ are perfect example of this sound.

There was also a brilliant moment that put to mind Toy Doll’s ‘Nellie the Elephant’ cover when Yak threw in a wee version of the hymn ‘He’s Got the Whole World in His Hands.’ This could be described as sacrilegious but it really didn’t seem, to me, like a derogatory or antagonising gesture but more of an expression of antireligious freedom.

Yak are modern day punks. Their dynamic style mixes from indie and psychedelia and is definitely one that results in the listener’s undivided attention. With such success so early on their career, it’s obvious the band are destined for greatness if they keep putting in work that put where they are today.