MARTHA DELIVER AN ENLIGHTENING, BLISTERING PUNK-POP GUITAR DRIVEN SHOW AT THE GARAGE IN LONDON IN THESE POLITICAL TURMOIL TIMES! 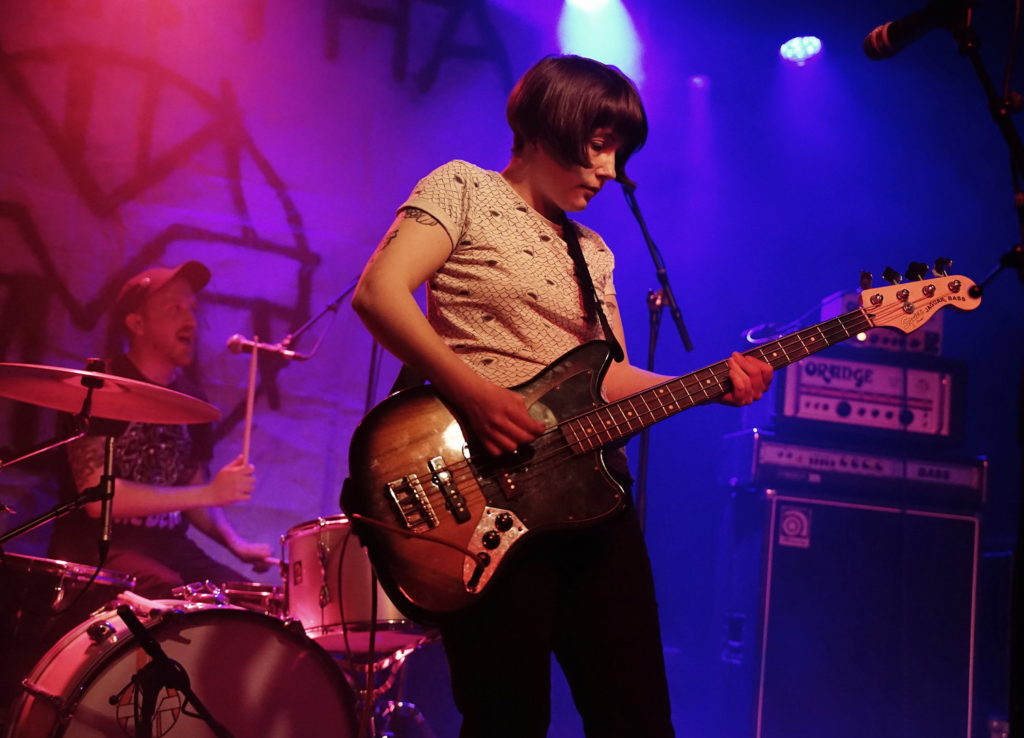 The evening started on a light hearted note with IRN Brunette who soon, with their joyous audience interaction and boiler suits,  drew the fans ever closer from the  back bar, playing tongue in cheek cover versions of the likes of ,’Tainted Love’ and the ‘Monster Mash’ to mention a couple. Their show such as is a, ‘much as a queer undertone to the songs and those of you who are prolonged behind the times, as announced by the Lead singer! 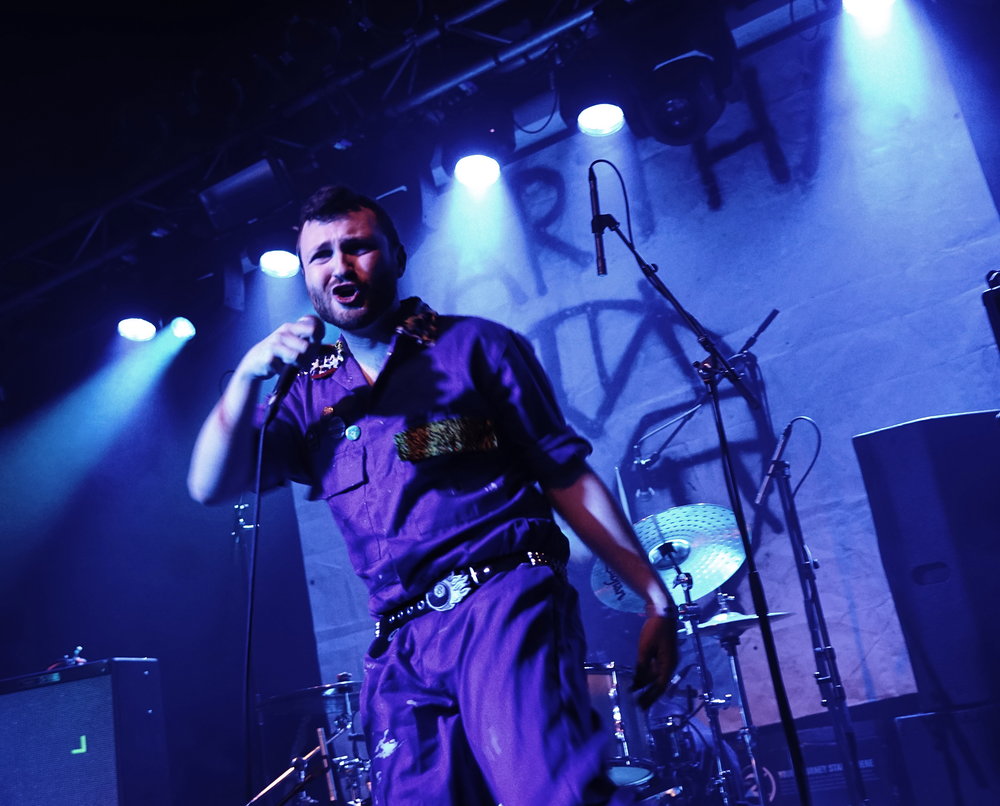 One a more up-tempo note, the WOAHNOTS swiftly wizzes through their catchy Guitar songs in a marrying toe tapping manor from the recently released ‘Young and Cool’ album and do hope the Trio’s future takes off and brings them along in leap and bounds with more of the fun filled pop songs kind and ringing melodies. 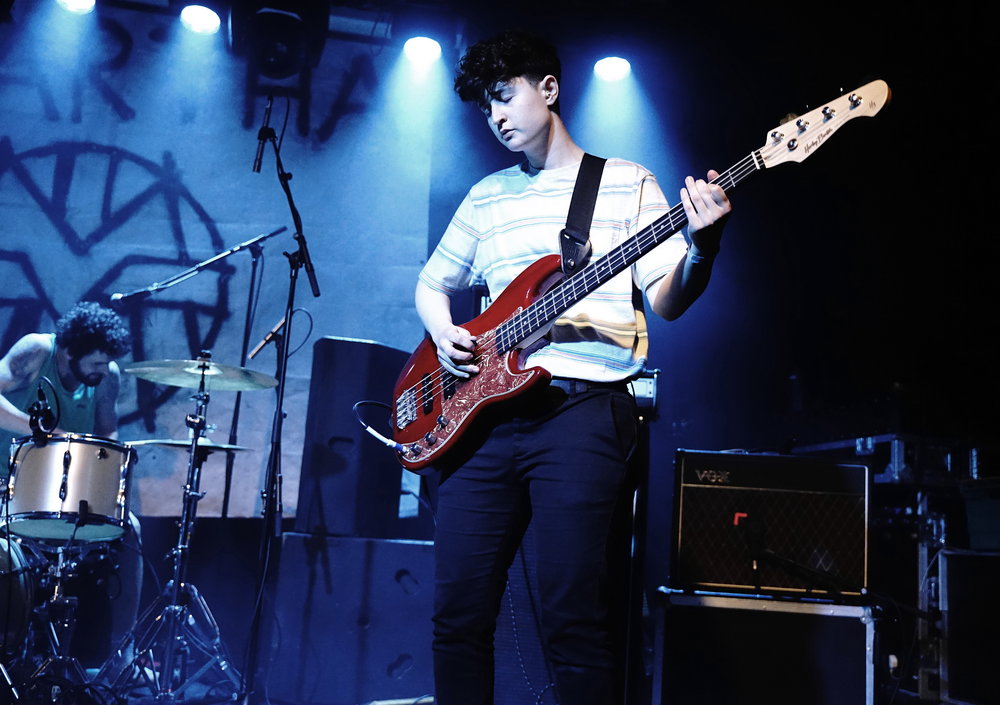 Martha, a four piece DIY punk band stemming from a small village called Pity Me in the North East of England, certainly get the crowds singing along at The Garage within a  nod of a turbulent political chaos in these uncertain times, whilst environmental protestors in London glued themselves to DLS trains is not a strong message enough in itself.

Martha were formed in a tiny Village called Pity Me in County Durham in 2010 by JC.Cairns, Daniel Ellis, Naomi Griffin and Stephens-Griffin, and early on, releasing the self-titled debut EP and not too long after bringing out their first album ‘Courting Strong’ on the now defunct record label Fortuna POP!

Tonight Martha itself bring chat and banter to the audience in a light mannered way in-between new and old songs that orchestrate sombre brilliance, whilst the drummer, Nathan Stephens-Griffin even given reference to their band friends ‘The Spook School,’ and thanking everyone who had turned up for this sold out headline show!

A strong influence in Martha’s songs can be seen with the likes of ‘The Housemartins’, ‘Billy Bragg’ and ‘The Replacements’, being a few names to mention and there is a seams they want to build a better world with their killer pop-punk songs.

The millennial generation crowds were certainly drawn in and cheering as Martha stormed on stage to welcome everyone with a track taken from the latest album, ‘Love Keeps Kicking’, with the Brexit gloms just around the corner ‘Westlemania’, with the lyrics, proclaiming ‘absence makes the Heart grow fonder’, a case is certainly put forward for the kind of society we live in today!

Heartbreak and self-doubt inform of the sound when Vocalist Naomi Griffin sings “My heart flutters then it sinks / because you only want to kiss me when you’ve had a drink”, for the song ‘into this’ as the garage rapidly heated up with the now tightly packed punters!

There is a sense of hope in their music as well as heartbreak and self-doubt predominately lace the lyrics of the songs ‘Precarious’, evident in today’s zero contract supermarket working society!

Martha’s set sums up a sort of po-faced lesson in class politics, however, but is an exhilarating journey through stories that fuse emotional pop and politics with the crowd cheering ecstatically, for more, as the encore ‘Christine’ and ‘Bubble in My Bloodstream’, closes with fizzy guitars and joyous harmonies that stick in one’s head and most generations can relate too and wish to hear more of!