BRITAINS BIGGEST BOY BAND SINCE THE BEATLES BLITZ THRU THEIR BLOCKBUSTER BONANZA, AND BLOW THE CROWD AWAY! 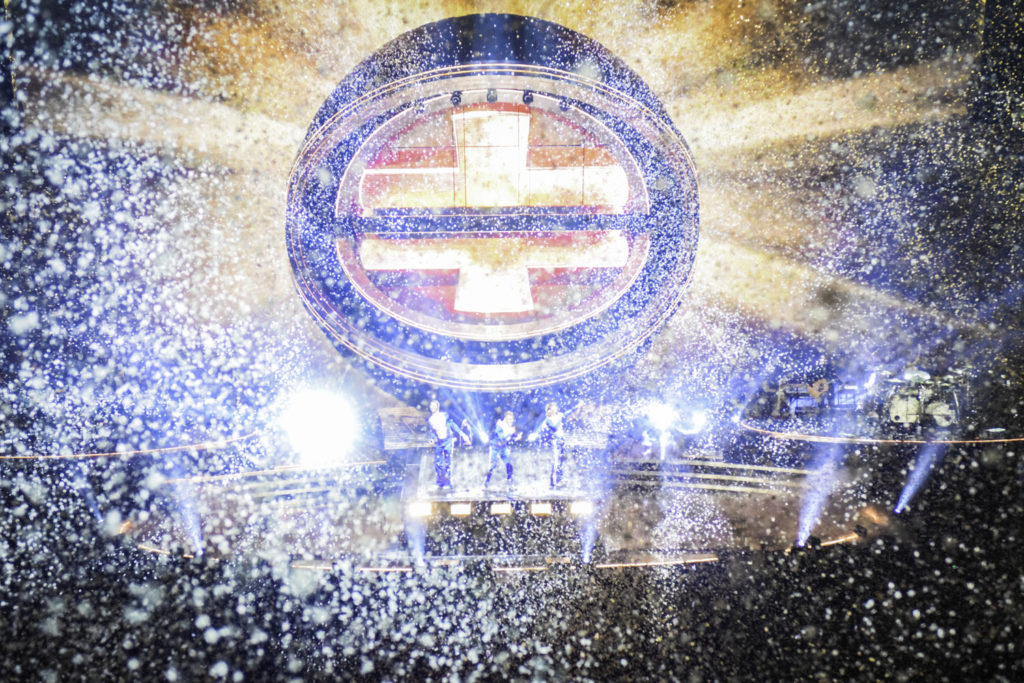 Take That are celebrating 30 years of being at the top of their game in British popular music. Driven from the front by main singer songwriter Gary Barlow and joined on stage by Howard Donald and Mark Owen, the once quintette are 2 guys shy from the original line up, with Jason Orange missing and obviously the biggest ego in music, Robbie Williams deciding to go it alone now too. But the fans dont care and pack themselves into Glasgow’s Hydro Arena for the first of three nightly trips back to the late 80s, through the 90s, into the naughties and smack bang up to date, with hit after hit and a 2 hour plus show which only goes to reaffirm how massive a group Take That were and still are.

But first to take to the huge stage tonight is another 80s superstar who has been strutting his stuff before TT were conceived, and continues to tread the boards now too. Rick Astley has the job of warming up the audience before the main act take over the evening, and he hits the spot with 4 or 5 of his bigger numbers, also including a cover of the Rag n Bone man / Calvin Harris collaboration Giant. Opening with Together Forever, he instantly had the crowd on their feet, and kept them there with She Wants To Dance WIth Me and Cry For Help, but there was only one song the crowd wanted and he closed his short set with the 80s classic Never Gonna Give You Up. 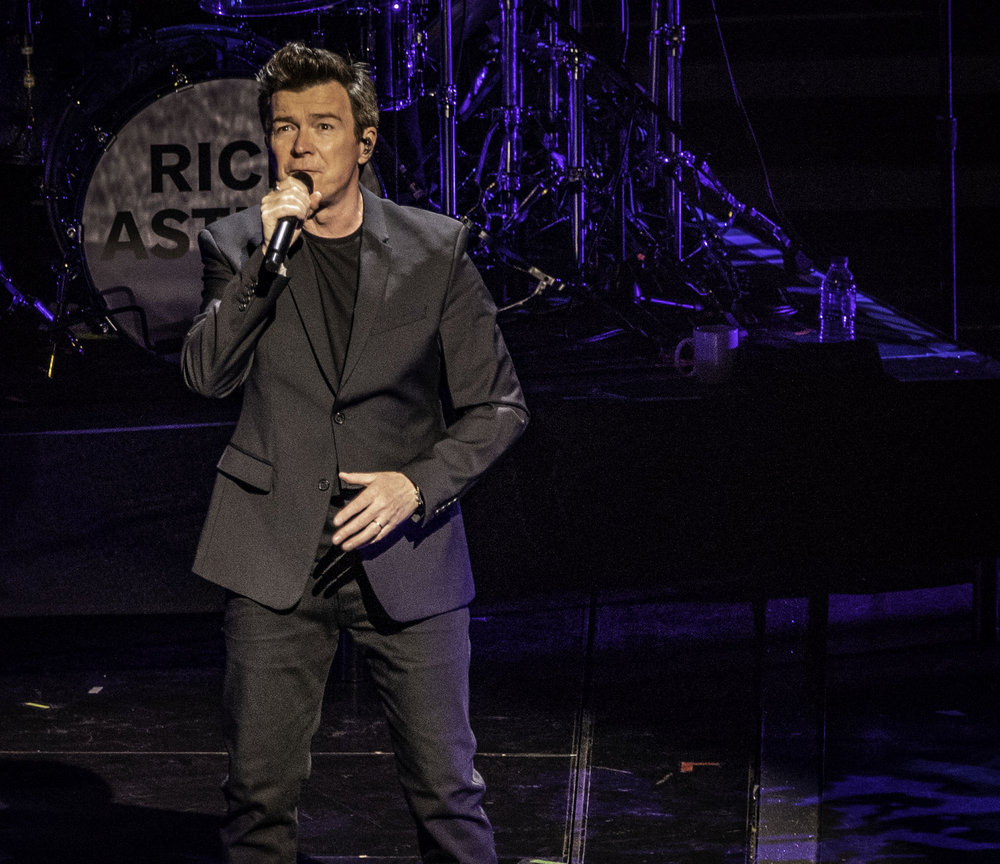 And now it was time for the main act. Take That were formed in Manchester around 1989 as a British version of the US boy band New Kids On The Block. They had a few early single releases and TV appearances with very little chart success until the cover of The Tavares’ It Only Takes A Minute in 1992 gave them the UK chart breakthrough they had been craving, and from then on it was history in the making. To date the band have had 28 top 40 singles, 12 of which hitting number one in the Uk, and 8 number one albums too. Add to this a string of worldwide number one singles and albums , sell out tours and industry awards and this only confirms them to be up there with the biggest names in pop music history.

Tonight the main stage is huge, a giant globe, open like a big pac-man with the initails TT inside spins round and the 3 guys immerge from behind the LED screens in the globe and open with Greatest Day. The crowd are going nuts when the opening bars of It Only Takes A Minute are played, and the first part of the show is off and running, thru the early stuff which established the group and put them at the top of the tree. Could It Be Magic, Everything Changes with Robbie on the big screen, Sure, A Million Love Songs, and How Deep Is Your Love, a cover from The Bee Gees. All top tracks in the back catalogue of Take That, and songs nearly every fan can sing along with word perfect. Throughout the gig, the big globe is doubling as a stage and also servng as a video display. One minute its a globe, then a meteor, then a huge eyeball which alongside massive screens behind, display older footage from back in the day, clips from press conferences, showing quotes made by the band members, and also close ups of tonights performance. 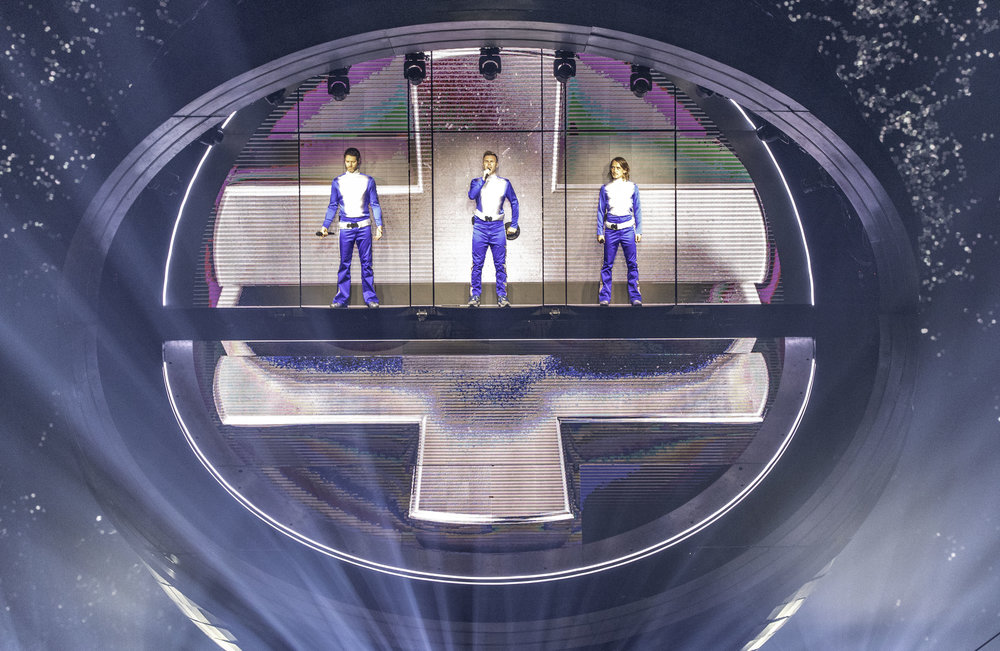 Time for a quick break, costume change and onto stage 2 now. Patience, The Flood, Back For Good, the big tunes kept coming, but surely one of the biggest cheers of the night was a surprise appearance by the city’s own Lulu, who joined the boys on stage for a rousing rendition of Relight My Fire, a song originally made famous by Dan Hartman. Shine, sung by Mark Owen on a huge staircase, Pray ‘sung’ by the dancers in sign language, Babe and Never Forget came next before the band members take turns in thanking the crowd for their support over the 30 years, and the evening is finished off with Rule The World and an indoor fireworks display, with the guys disappearing back into the massive globe they came from 2 hours previously.

Like most Take That tours of the past, it isnt simply just a live gig, its a stage show, its theatre, its an experience and tonight was no exception. A spectacular stage set up, graphics, dance routines, light shows, confetti cannons and fireworks, couple this with the back catalogue of hit after hit and you can only really expect one thing. Take That and Party !!!