IDLES ROCKS OUT MANCHESTER’S ALBERT HALL WITH A SOLD-OUT SHOW.

At the end of this most cathartic of experiences one punter exuberantly exclaims, _” that was not fucking punk!”_ and although it was unclear if this was a drunken grouse or not, he may have a point. **IDLES** are too smart, politically aware, and philanthropic to fall into this category. The chainsaw drive of their music may prompt a comparison with the genre, but behind the relentless volatility lies a complexity that explains the overwhelming response from a hugely diverse audience this evening in the sold-out Albert Hall.

Opening track ‘Colossus’ is the perfect way to explore the argument that the Bristol outfit is more than a punk band. It’s also the opening track to the critically lauded sophomore album _Joy as an Act of Resistance_ and deals with the complex relationship Talbot has with his father. It’s clattering and guttural benediction is delivered in a darkness that is eventually split asunder by lightning bolt strobes that accompany the gouging guitars of Mark Bowen and Lee Kiernan. Talbot’s vocals increase in intensity as he prowls, low-slung, grasping at dark emotions which he slams unceremoniously onto the vociferous crowd before him. The first half of the song has more in common with Nick Cave’s scuzzy blues before the song mutates, ripped apart by a spiky hand-grenade eruption which sees the crowd match it’s untrammeled aggression and a wave of crowd surfers enthusiastically catch the shrapnel swell. 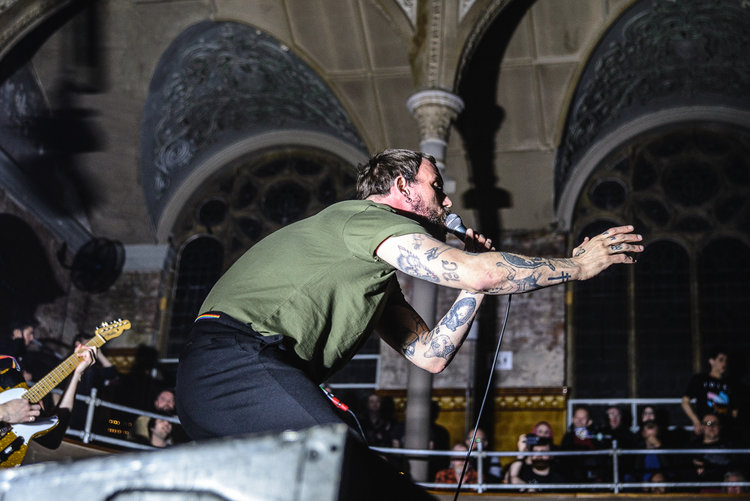 ‘Mother’ follows, once again addressing unambiguous themes in the non-pontifical way that Talbot appears to adopt in much of his material. It’s faster, angrier, and more thrilling and this unrelenting approach continues with the breakneck sarcasm of ‘Faith in the City’. It’s a hugely entertaining and utterly compelling induction to the IDLES remit but it is not until ‘I’m Scum’ arrives that the impressive connection between band and fan is utterly realized. Not for the last time, much of the song and it’s cries of resistance are rapturously left to the fans to sing along to.

We’re told to never buy the fucking Sun before the astutely humorous ‘Great’ explodes before us and this is followed by Talbot’s sincere appreciation of the NHS before ‘Divide and Conquer’. The wanton stupidity of racism and positivity of immigration on ‘Danny Nedelko’ is also addressed and as the impetus of these songs develops, the old punk label the band were originally given when they first began to make waves appears to fade before us.

The impish Bowen’s is a bare-chested scoundrel on ‘1049 Gotho’ but it is his compatriot Lee Kiernan who goes walkabout first, ascending to the Albert Hall’s horseshoe balcony with only a trailing amp cable betraying his whereabouts as fans engulf him on his sojourn from the stage. 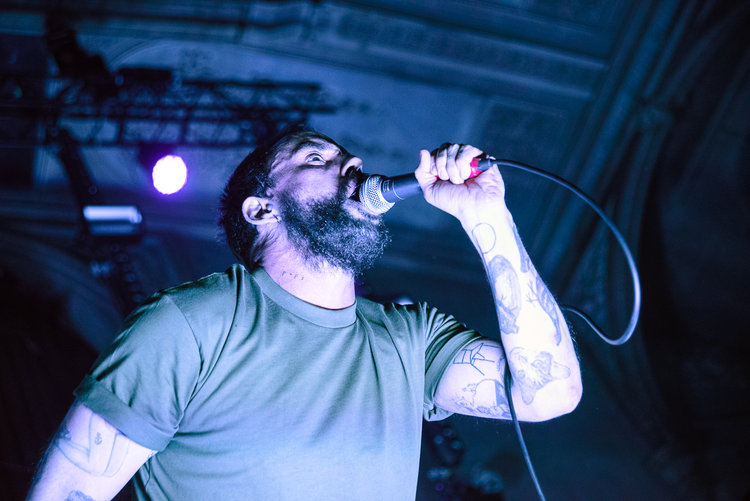 ‘Heel/Heal’s’ autopsy of a vacuous middle-class existence provides yet more compelling evidence why this band has connected so comprehensively across generations but on ‘Exeter’ it’s all about the unadulterated satisfaction of knowing our bands get us just as we get them. The unbridled chaos of the song’s conclusion sees two fans take over guitar duties and their enthusiastic ineptitude contributes to the cacophonous scale of the whole evening. Bowen eventually returns to launch into a raw version of ‘Misirlou’ which ultimately morphs into the pounding ‘Never Fight a Man with a Perm’ setting up the ferocious conclusion of the evening. It might be brutal but there is a rationale behind the savagery. This fact alone proves that IDLES are more than just another punk band.