NOTHING HELD SHAWN MENDES BACK AS HE SET THE AUDIENCE ALIGHT WITH HIS EMOTIONAL, KNOCK-OUT PERFORMANCE.

Shawn Mendes is an artist who suddenly became the name on everybody’s lips. Whether his pop style is to that of your personal taste, I would bet with near certainty that you’ve heard of his name. His songs fill the airwaves and the charts. His collaboration list features some of the most in-demand influencers in popular music.

Video sharing sites like YouTube and Vine (R.I.P) are filled with amateur musicians, young and old, looking for their sound to be heard. Mendes lives the dream of the majority of these musicians. In 2013, fourteen-year-old Mendes started to post covers online and the year following saw him signing a record deal with Island Records. He released a self-titled EP in 2014 but it was when ‘Handwritten’ came out that his fame eruption really began. He scored his first number one in the UK with the track ‘Stitches.’ He followed this up with ‘Illuminate,’ an album full of catchy, belt-it-out pop that that is irresistibly catchy. In 2018 he put out his self-titled studio album where he worked with likes of Ed Sheeran, John Mayer and Khalid to name but a few.

In the US, all three of Mendes’s albums have charted at number one. He has been nominated for, if not won, seemingly every award possible for a pop artist. Mendes is even, in fact, mentioned in the 2018 Time magazine list of the 100 most influential people in the world. In interviews, he comes across very charming, humble, and open. Despite his first dream to make it in the acting community, his talent as a singer and songwriter is undeniable. This young Canadian is only 20 years of age and has already shown he is on a quest to make his mark and is a force to be reckoned with.

As to be expected, Shawn Mendes sold out Glasgow’s modern SSE Hydro, with its capacity of 13,000. Youthful energy filled the arena but his appeal does extend past adolescences with groups of young adults, mid-lifers in for the evening as well. Prior to his appearance at the Hydro, Mendes posed with fans and signed autographs outside his hostel Bath Street earlier in the day. 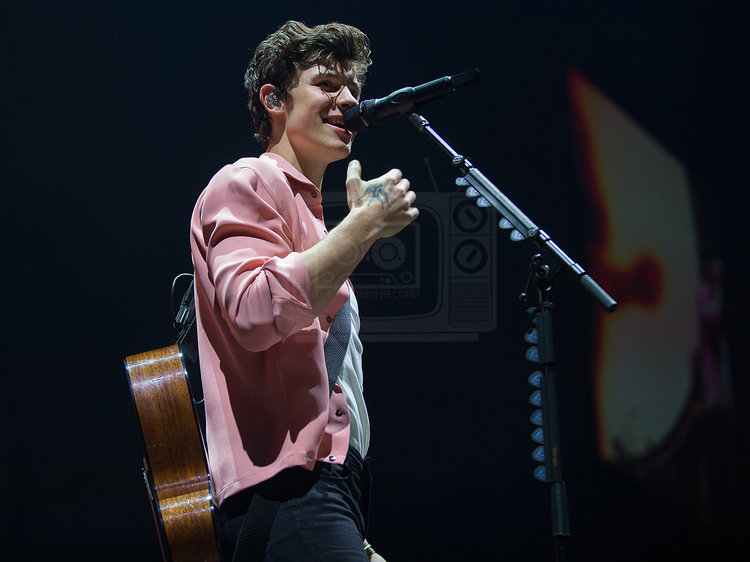 The elation from the crowd went up in a roar as Shawn Mendes took to the stage. Lovingly crafted banners and signs punctuate the delighted faces of the fans. The screaming was deafening, feet started jumping, and hands started flailing. This moment and night coming meant so much to so many in the audience that night.

His third album was played in almost its entirety in Mendes’s epic twenty-two song spectacular. Mendes looked like a retro heartthrob wearing a white vest under his open-hanging pink shirt. His hair is a messy quiff. Towards the back of the stage, a four-piece band supports the icon as well as a huge circular visual display that lights up and rotates throughout the night.

The opening number was single ‘Lost in Japan’ from his most recent studio album. Mendes cruises back and forth across the stage in front of the superb graphic display. He looked and sounded at ease on stage. He looked in his element. He also played the hits ‘Nothing Holdin’ Me Back’ ‘Nervous’ and ‘Stitches’ early in the set. During the latter, the crowd was lit up by remotely control color-changing LED wristbands. Playing such big hits so early into the set was a risk and one that was not the greatest of choices but with Mendes’s dynamic writing style even the lesser-known tracks did not fall flat. The tracks ‘Bad Reputation,’ ‘When You’re Ready,’ ‘Where Were You in the Morning’, and ‘Why’ was some performed incredibly. ‘Treat You Better,’ of course, resulted in a frenzied excitement from the fans. As did ‘Youth,’ complete with empowering speech from Mendes about freedom, happiness, power, and influence. 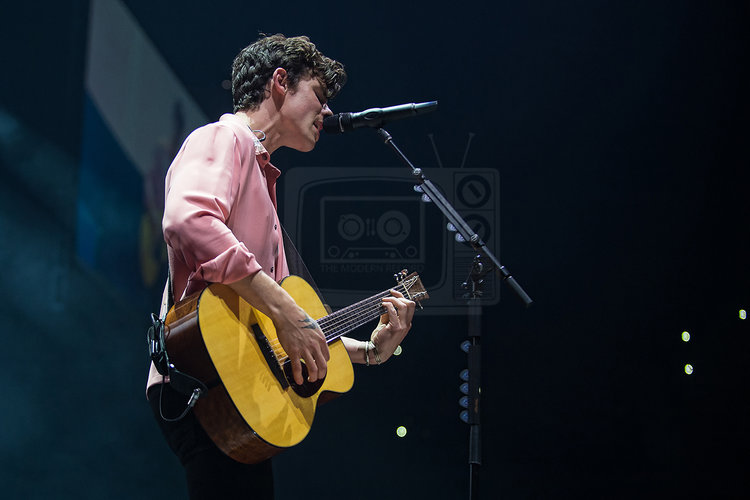 But what made the night, the story that every attendee went home and told was Mendes’s honesty to the crowd. The star is sitting at the piano, as the set begins to draw to it finales, and he talks very frankly about mental health. He opens up about using beta-blockers to treat the symptoms of anxiety and states that this is his first performance without their influence. He declares his love to the crowd and they scream in back at him. It was such a tender and moving moment to be part of and if fans had fought off the tear when he arrived on stage then they were at war at this moment as the easy-going seeming singer’s displayed such vulnerabilities. This speech is perfectly followed by the track ‘Life of the Party.’

For an encore, Mendes chose Coldplay’s emotion heavy number ‘Fix You.’ This is an incredibly tough song for any vocalist but he nails every line with beauty and meaning. He closes with the ballad banger ‘In My Blood,’ complete with confetti explosion. The audience applauds Mendes with vigor and delight. Eyes, still damp, tear up again. The performance had been breath-taking.

Shawn Mendes has got it all; talent, charm, charisma, style, passion, and, most importantly an ability to connect with his fans. His performance gave viewers an emotional reaction many, particularly young attendees, will draw so much inspiration from. Mendes is tipped as the new Justin Bieber but I think Bieber can only wish for the depth and delights the Mendes has unlocked. 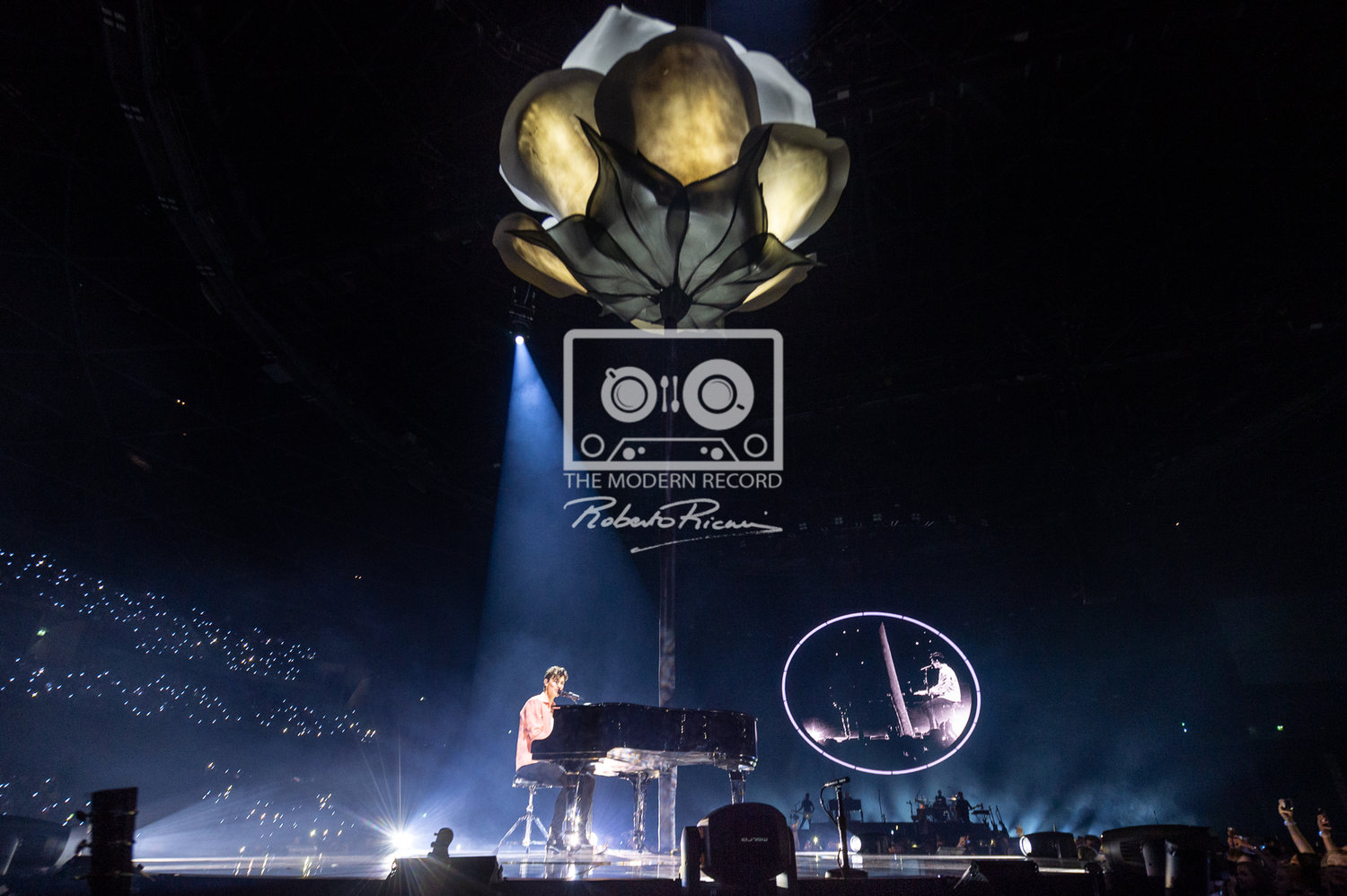