ALTERNATIVE ROCKERS DISTURBED’S EVOLUTION TOUR ARRIVES IN GLASGOW, AND BRINGS WITH THEM EVERYTHING BUT THE SOUND OF SILENCE!

The grand old O2 academy on the south side of Glasgow saw not one but 2 rock bands visit at the start of the week, support act Skindred and headliners Disturbed. First up was Skindred, from Newport in Wales. Describing themselves as ‘Ragga Punk Metal…wid a twist ‘, they stormed the stage and played a blistering set, warming the already red hot crowd and setting them up perfectly for the main act. Tracks such as Big Tings, Sound The Sirens and That’s My Jam provided plenty of audience participation to help loosen the vocal cords for the long night ahead. Frontman Benji Webbe was perfect in getting the place moving, and Skindred is a band definitely worth seeing in their own right. A great start to the evening.

Now it was the turn of the main act. Hailing from Chicago, Disturbed are a four-piece alternative rock band, consisting of David Draiman on vocals, John Moyer on bass, Dan Donegan on lead guitar, and Mike Wengren bringing up the rear on drums. The atmosphere in the Academy is electric, the temperature is near boiling point as the lights go down and a video plays at the rear of the stage, showing highlights of the band’s career as they rose up through the ranks to become the major player in the hard rock music scene that they are today.

Opening with Are Your Ready from their most recent album Evolution, they continue with Prayer, The Vengeful One, and The Animal. The crowd is ecstatic and loving every minute. Moyer on bass and Donegan on guitar take turns in swapping sides with Draiman commanding the stage in the middle, his fist punching the sky. Stupify follows, with one of many guitar solos, highlighting the talents of the guys on stage, before the first of 2 covers of the evening. A tremendous version of the 1987 Genesis hit Land Of Confusion, the front man’s vocals are on point and the crowd on backing vocals nearly lift the roof. 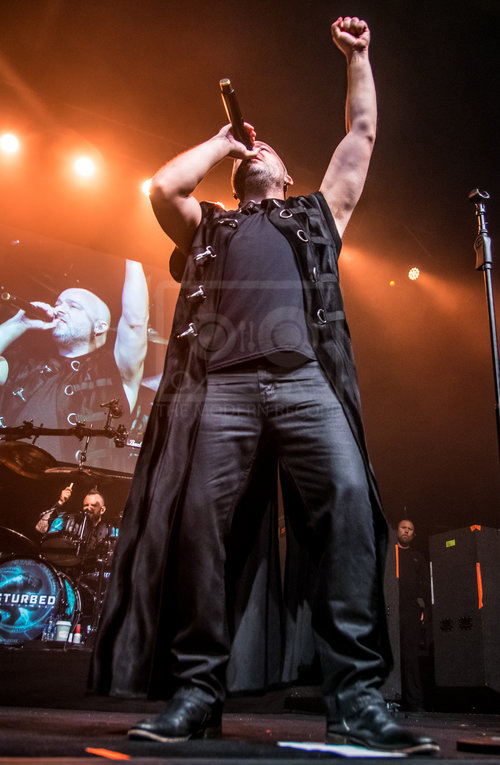 Time for an intermission now, a short video plays before the band return for the acoustic section. A Reason To Fight and Hold On To Memories are played before the track which brought the band to a lot more people’s attention, their cover of the Simon and Garfunkel classic Sound Of Silence. The stage is in darkness as it temporarily expands to include 2 young ladies on strings, 2 kettle drums, and keyboards. As the haunting intro begins, Draiman returns to the stage before pouring his heart into the song. Paul Simon could never have envisioned a version like this.

Indestructible and Inside The Fire concluded the first part of the set and the band left for a well-deserved break before returning to a huge roar from the jam-packed Scottish crowd. The Light, Stricken, and Down With The Sickness finally closed the evening, with the band and the crowd has given their all, both parties left the venue hot, sweaty, and completely drained.

The buildings’ foundations certainly took a pounding with not one but two great performances this evening. Skindred, providing a great warm-up and Disturbed proving what a great band they are. Draiman requested during the show that as so many people failed to get a ticket, next time they’re in Glasgow, could they play somewhere bigger. I’m sure The Hydro could see their presence very soon with no doubt another sell-out show. It will certainly be one to keep your eyes peeled for. 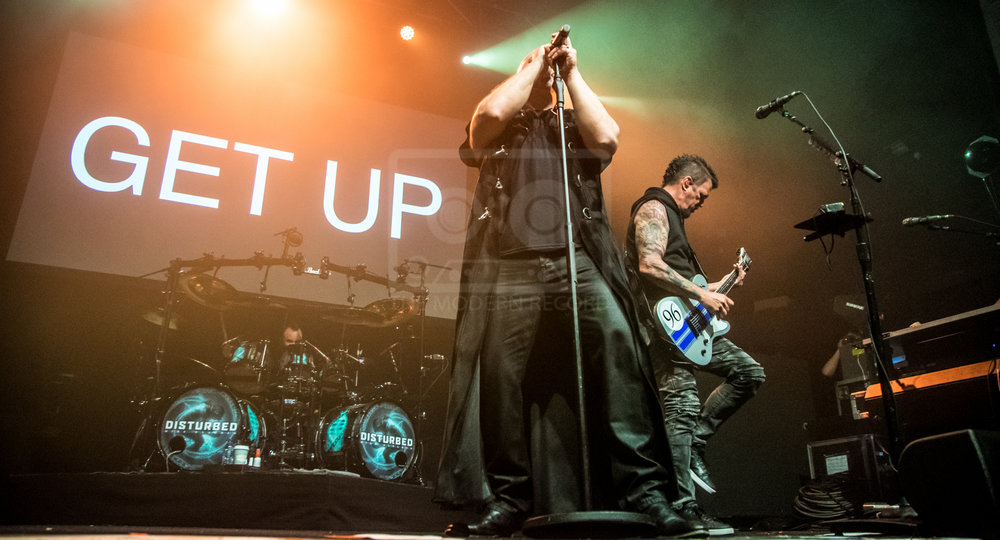