Many articles could confuse you by using these terms interchangeably, they are not wrong, you just have to level up your knowledge and experience about these devices in order not to get confused. Let’s start by extensively explaining these two in isolation which will thereafter lead us to the obvious similarities and differences between a turntable and record player. 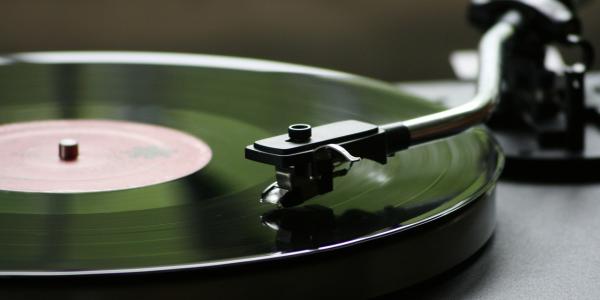 It is very crucial to note before any explanation that a turntable can be used in two different contexts. The turntable can stand alone as a device or as an element/ a fundamental component of a record player; a part of the broad unit of a record player. Here, we are looking at the turntable as an independent device. It is usually combined with other external equipment to form a set-up.

The turntable comes in the shape of a flat disc used to spin the record. It consists of a cartridge, a platter, and a tonearm which enable it to operate as a stand-alone unit. However, complementary components are needed for the turntable to function perfectly well.

The device is still very much in vogue as dynamism never ceases with continuous manufacturing. There are amazing modern rings attached to the device which makes it welcoming and acceptable even by youths. 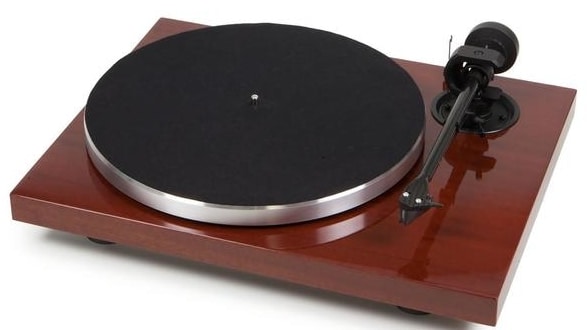 The stand-alone device is designed to send an electrical signal out to the HiFi system for amplification in order to play records. The platter that comes with it spins the record as the tonearm picks the music that has been sculptured into the record.

There is the need for external components like the turntable preamp amplifier and speakers to play the record as turntables do not always come with any of these hence, turntables are stand-alone devices and not all-in-one devices.

Basically, it is the combination of necessary elements required to enable a record to spin and send sound from its grooves to other output. Some turntables come with a built-in preamp amplifier and speakers, nevertheless, there is still the need for an external amplifier and speakers connected.

Some audiophiles would rather prefer to get an external preamp than go for a turntable with a built-in preamp. They believe the best sound comes from a turntable with external components to play and achieve high sound quality. Regardless, it’s all based on preferences.

The Components of a Turntable

The turntable includes the motor, platter, a tone-arm, cartridge and stylus, and  Some could include a built-in preamp as discussed earlier. The turntable preamp allows for the connection of the turntable to external components without the worries of a phono preamp input. It works to boost the phono signal from the device for easy input to a receiver or an amp.

The stylus, like a needle, digs through the grooves of the record and propagates the vibrations through cables in the tone-arm to the cartridge. The cartridge then takes the transmitted information in form of an electric signal and sends it to the preamp which then turns it into sound through an external amplifier and speakers. 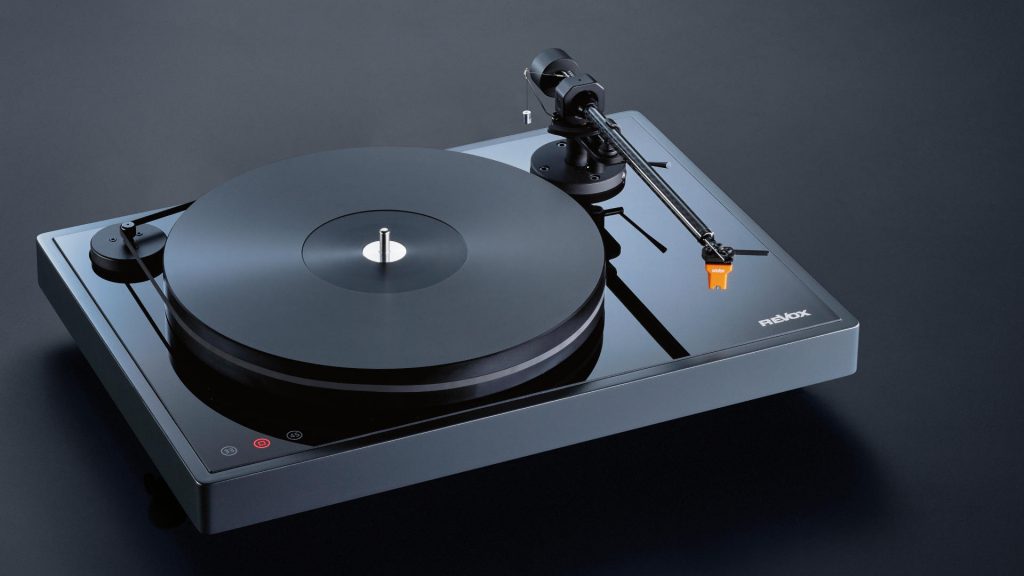 The tone-arm works relentlessly to hold the stylus and cartridge in place. The tonearm is connected to the plinth at an end. The plinth is the base of the device. The part that spins is the platter.

How the Turntable Works

Spinning! The turntable works to spin the vinyl player to produce the sound that has been carved inside of it. The turntable has a flat surface on which the record is placed. The speed selector rotates the vinyl at a regular pace which enables the turntable to play records of 33RPM, 45, and even 78RPM.

Just as explained above, the vinyl rotates under a needle (you know what that is) that reads the grooves sculpted into it, this is what forms the sound vibration. They are then sent to the cartridge which then sends the electric signals to the necessary output. You have your vinyl record sound from your turntable right there.

The sound produced by the turntable is way too quiet which is why there is the need for an amplifier and a speaker. So, to make the best out of your turntable, two RCA male plugs are quite needed to send the reduced phono cartridge output to an RIAA EQ.

The preamp enhances the electronic electrical signal to a reasonable frequency; the line level. The amplifier consumes this and enables access to speakers producing sounds as high as you would ever want it.

This means, all needed output for the record is internal and there might be no need for further purchase of output to make it sound better. Inside of it is all you’ll need to listen and playback vinyl records, awesome right? Let’s not get fully excited yet until we talk in detail about the record player. 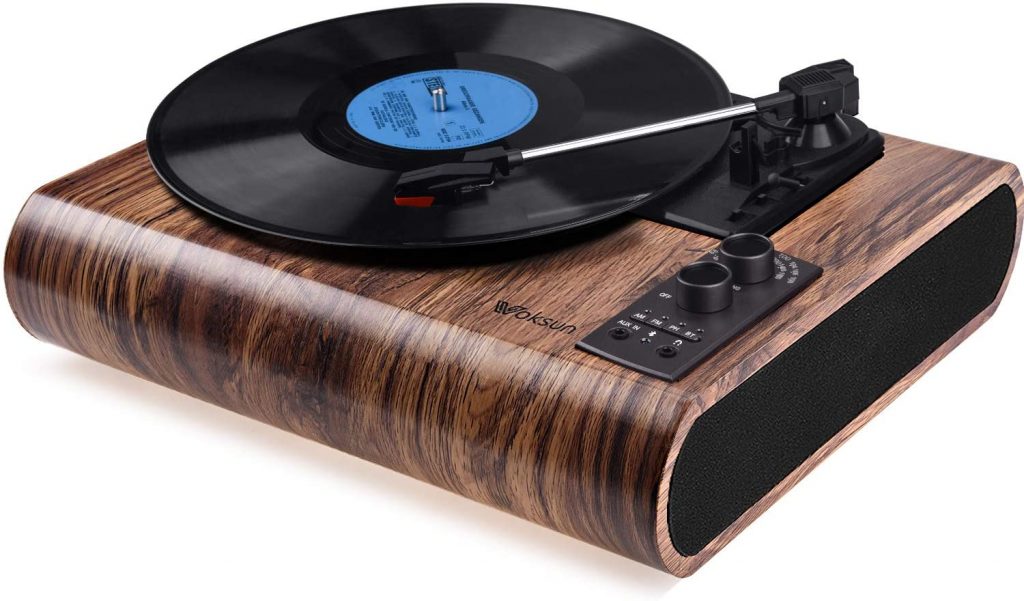 A record player contains components like a preamp, amplifier, speakers, along with the turntable(the other type of our classification under turntable). There is usually no need for extra cables or boxes. The record player is more detailed than the turntable as it comes with extra features like MP3, radio, CD, among others.

Due to the other components that come with the record player, they are bigger and heavier. Moreover, just like a turntable, the record player also consists of a stylus that captures the electric signal and also the cartridge to produce sounds. Surprisingly, they can be used to make fusion music with vintage and even modern audio.

You can find features like FM radios and Bluetooth connectivity on some record players, giving room for cellphones access and connections. Audio files from vinyl records can technically be transferred to digital devices.

Generally, record players come with amplifiers which also make them larger than a turntable thus, not portable enough to take on the go. They are only suitable for homes and offices, mounted on a dedicated stand. Due to these numerous features, they are also way more expensive than turntables.

However, do not forget that when all these components are housed in one piece, quality components are most times always compromised. They sure can not be compared to other same components that stand in isolation.

Components of a Record Player

One amazing thing about the record player is the behind-the-scenes functions. All it requires of you is just the power cord. It is a housing device for several components like the:

Most record player features were added with time thanks to dynamism. The record player has been around for a while now. Thomas Edison’s invention of the groundbreaking phonograph back then brought us to what we have today. 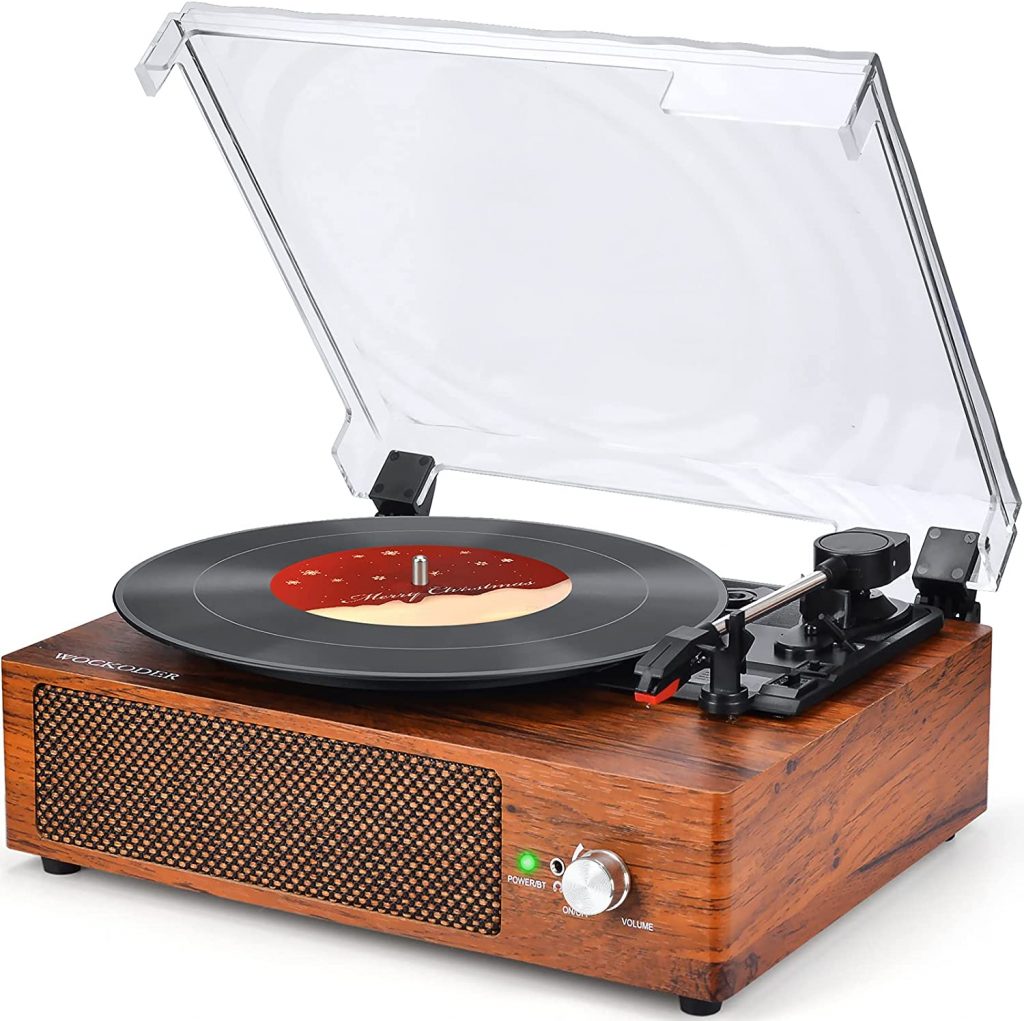 It is incontestable that the record player is more convenient and takes less space. It can simply be plugged into an electric outlet and brings life to the environment all by itself but as I said, it all depends on preferences. Some audiophiles put sound quality first before any other inconveniences so, aesthetics is always the major judge of quality.

Comparison Between Turntables and Record Players

These two can be compared in different directions when accounting for specific requirements. We have given the notable difference between a turntable and record player, we will compare the two devices based on quality and performance. 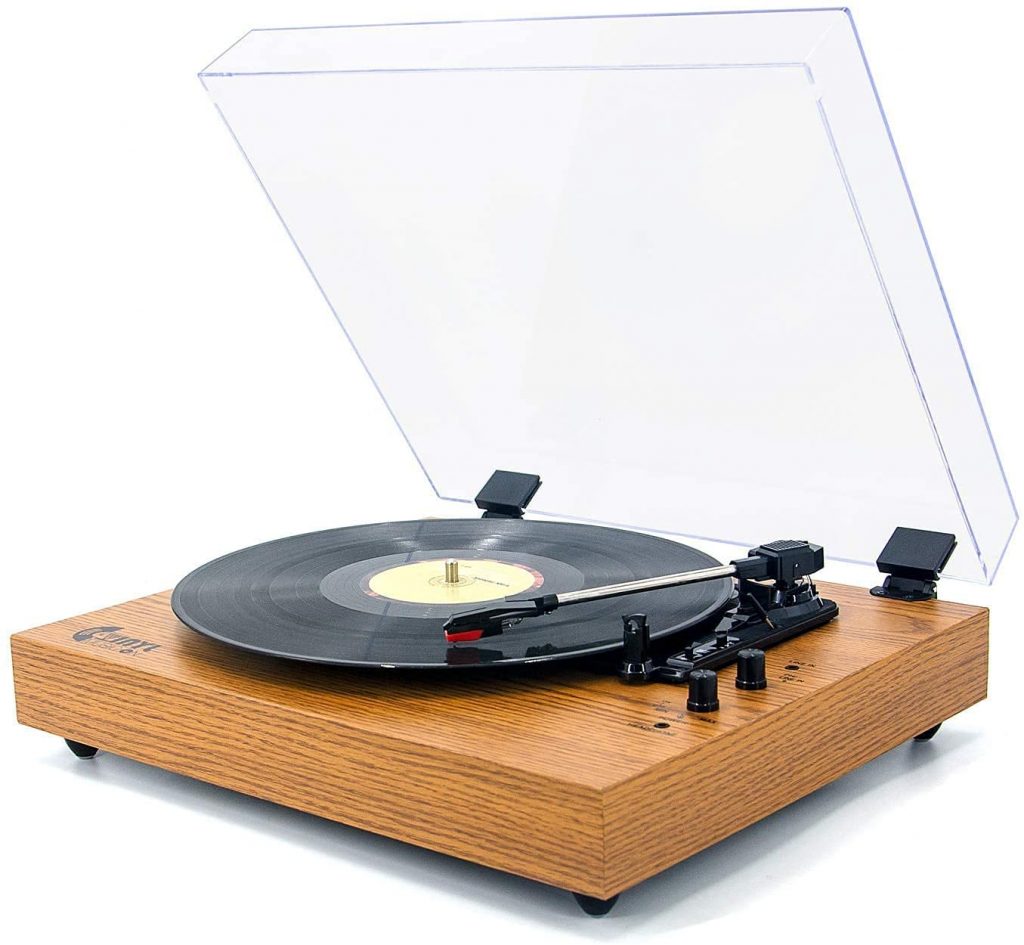 The modern production of record players cut corners in order to make room for different features at a not too expensive price which eventually resulted in a poor quality build. So generally, turntables are better than record players in terms of build quality.

A turntable, together with the necessary external components costs more than a record player. There is separate money for the turntable itself, the external speakers, the preamp, and the amplifier. All of these cost way more than a record player that has everything housed in it. The price however can assure you of durability as it makes the set-up stand the test of time.

When talking about the impact of these devices, it mainly deals with the effect they have on your vinyl record. Which is suitable and preserves the record rather than cause wear and tear. The tonearm of the turntable is more suitable compared to the record player’s stylus. This is not being biased, you can make your findings. And like I’ve always been saying. It all depends on preferences.

Which should you go for

Frankly, only you can decide. You have to consider the specs and components of both devices to make your choice. Both devices in a way or another have their advantages and disadvantages, you can opt for the one that suits your personality the most.

However, a lot of people prefer record players to turntables because of the easy set-up and lack of ceremonial additions. You do not have to go through the stress of any set-up, just make a connection and start a wonderful experience with your vinyl records. Plus it allows for MP3, AM/FM radios, CDs, and connectivity. They are very nice but do not forget it’s all at the detriment of the sound quality.

Moreover, I personally think a quality turntable is better than a record player. These external components are a form of investment, plus they can also be connected to other audio players if not the turntable.

Audiophiles who really care about the sound performance of the vinyl record always go for turntables rather than record players. It is worthy to note that a built-in amp and speaker can not match the sound quality of an external amp and speaker, not even close to it. For professional DJs, there is no consideration for a record player, it is always the turntable.

So depending on your needs, you can choose between the two. If you are the type that just wanna listen to some vinyl records without any form of hassle, you can opt for a record player. Are you so interested in the sound output of the vinyl record and maybe the durability? Then get a turntable. I hope you get the one that serves you best and enjoy a beautiful vinyl record experience on it.

The difference between a turntable and record player is now clear and if used interchangeably, you can find your way around it. Just as discussed, none is better or worse, they just both have different target audiences. And like I keep saying, it all depends on your choice and preferences. I guess by now, you probably know which one is better for you or at the very least, a general idea about turntable and a record players.