You may want to learn about these studio monitors or are wondering which studio monitor to go for between Yamaha hs80m and the new hs8, well, we’ll discuss extensively on both speakers and you can pick your best option after. It is no news that the hs8 is the new version of the hs80m studio monitor, let’s take a voyage through the main Yamaha HS Studio Monitor. 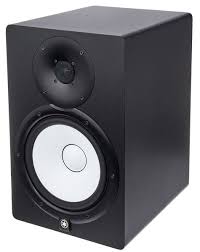 The Yamaha nearfield monitor has been iconic way back in the 1970s. This is because of the production of good and genuine products. The HS Series comes from Yamaha’s first studio monitor, the NS10S which was released in 1978. The NS10s had some little defects which gave rise to the second-gen invention starting with the HS5 which includes notable improvements from the previous ones.

The second generation of the HS range of Yamaha includes the HS5, the HS7, and the HS8 where the HS8 is the newest version made in replacement HS80m. The 5 and 8 in the name of the speakers actually represent the size of their LF drivers in inches. The other speakers in the series have 2 amps, 65 watts- 30 watts for an inch dome to allow high frequencies.

This new series reproduces a great number of music with different instruments, like the HS7s that gives smoothness and a fine stereo positioning. It possesses a balanced frequency response for clear reading of the track foundation. The newest HS8 also possesses a subwoofer that helps the setup with more than 150 watts of low-end power.

The HS series speakers were actually designed to offer ideal, honest, and precise speakers to build out during and after every mixing process. The engineering sector in Yamaha has combined acquired knowledge and professionalism with sound technologies to give the most magnificent studio monitor in town. The second generation HS series adds a new model- the 6.5’’ model to the lineup enhancing its accuracy in a different recording environment. The HS models have a great range and are accurate products for mixing and music production. 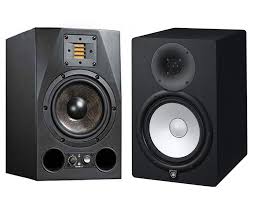 Yamaha hs80m is the new model after the NS1O. It is an active model designed with the intention of specifically giving a flat and honest reference with a super fantastic degree of bass extension. It possesses a large woofer, white coned bass driver, and of course, in black. It is designed to be used with stereo, the surrounding configurations, and an optional subwoofer in form of the hs10w. The price ranges from $349.99 to $351.99.

The hs80m is also designed for nearfield and project studio applications just like most active studio monitors. It is a two-way bass-reflex design, bi-amplified through an active crossover. The bass port on hs80m is on the rear panel and it sports a finned heat sink to reduce the intensity of the power amplifiers. The hs80m consists of a 120W power amplifier that is, 75W bass and 45W treble on board which delivers a 42Hz to 20kHz ignition from the 8-inch bass 0r mid driver and an inch dome tweeter.

Moreover, the frequency response is measured at 10dB just like the NS10. The tweeter is protected with a metal grille which actually affects by giving it a waveguide style but at the same time controls the dispersion at the crossover point.  The power to the hs80m enters through the usual IEC socket on the rear panel but there is another choice of XLR inputs or balanced jack. On the gain trim knob are EQ switches labeled MID WQ, Room control, and High Trim. 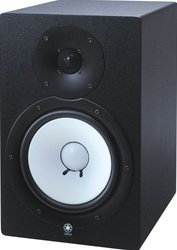 The Mid EQ gives a choice of flat-2dB or 4-dB shelving at 500Hz to enhance the level out of the bass response when mounting the speakers closer to walls or sharp corners. The High Trim switch also offers the same cut or boost options but at the same time works for frequencies above 2kHz.

There is the presence of another Low Cut switch that pulls out the low end at 80Hz or 100Hz or probably leaves it flat letting the speakers work at their maximum bass extension. The bass end is actually not needed to be cut off high unless one is checking a mix for suitability with smaller consumers or even radios. It is more useful to find that particular option at the front panel.

Also, Read – How Long Does a Moving Coil Cartridge Last

The speakers are also magnetically shielded because there are many other conventional CRT monitor screens that are still in use most especially in video facilities. The total weight of the case size is 250*332*390mm with a total weight of 11.3KG per speaker with only room control sound setting. The Yamaha hs80ms is a bit larger than the old NS10s because of the onboard amplifiers which it possesses and it has a high trim 2db with fantastic sound settings with the same power outlet.

The Yamaha HS80m in Studio

The Yamaha HS80m is used in the studio to playback mixes and some reference CD tracks. It has a fantastic dazzling display that lights up when the speakers are active. It has an improving magnificent sound which is very detailed with amazing stereo imaging and great electronic music with fine room acoustics. The rear panel buttons can be used to modify the response to some extent if the sound seems a little more aggressive but does not affect the essentials of the speaker.

It possesses a reasonable amount of bass extension and a better sound than that of the NS10. The HS80m gives a greater level and better bass-bass synths, bass guitar, and kick drums compared to the previous NS10.

The Yamaha hs 8studio monitor is the replacement for the popular hs80m and NS10 studio monitor. It is designed for larger studios and the need for deeper bass. It possesses an amazing sound quality with optimum satisfaction in the low key. It can comfortably and diligently run without a subwoofer with great mids and highs.

The Yamaha hs8 gives a flat nice response with balanced frequencies. It is an agreeably big and heavy speaker. They are extremely solid as they are made from MDF board, enhancing their durability. The Yamaha hs8 comes with a 3-way mitered joint for the reduction of the resonance and this in its own way engagingly improves the sound quality. The Room Control and the High Trim give room for adjustments for both the low and the high frequencies and also help in the placement of the speakers. The sound system is known for producing electronic music, calibrated bass, and flat frequency response. 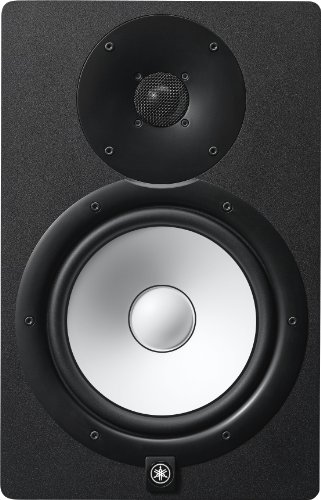 It has a simple and cool design, a professional look rather than a boring look. It also possesses the TRS and the XLR which enhances the balanced and unbalanced signal connection to the speaker. The larger studio is packed with different options under it like the:

The HS8 is soundwise with a woofer plus an inch dome tweeter. The monitor studio has a newly developed transducer that gives a 38Hz- 30kHz frequency response. It is bi- amply designed with an amp specifically for the woofer and the tweeter which gives the monitor studio a neat flat sound and an XLR and TRS jack input. It also offers a number of tuning options to get the best out of your speaker. 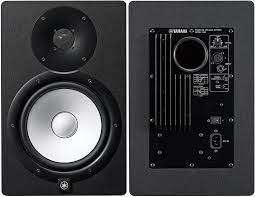 The Differences Between HS80m and HS8

Yamaha HS8 as said earlier is the upgraded version of HS80M. They both have almost the same acoustic and visual features but with some slight differences. Some of these differences include:

Similarities Between HS8 and HS80m